The Class 175 Coradia is a type of diesel multiple unit passenger train used in the United Kingdom. The fleet of 27 sets were built from 1999 to 2001 by Alstom at Washwood Heath in Birmingham. They are part of the Coradia family of trains along with the Class 180.

The entire fleet is owned by the Rolling Stock Operating Company Angel Trains. They were originally leased to First North Western, but the fleet has since been transferred to Arriva Trains Wales. For a brief period, units were also sub-leased to TransPennine Express.

Eleven two-carriage and sixteen three-carriage units, worth £78 million,[4] were built for First North Western to allow for the replacement of elderly Class 101 'heritage' DMUs and locomotive-hauled trains to Bangor and Holyhead. As they were constructed, the old locomotive sheds at Chester were replaced with a purpose-built facility in order to service the Class 175 units.[2] Units were tested at low speed at the Severn Valley Railway before further testing and driver training at the Old Dalby Test Track from November 1999.[5] The first unit entered service on 20 June 2000.[4]

The two-carriage units are numbered 175001–011, and the three-carriage units 175101–116. Carriages are labelled as coaches A–C, with two-car units having no coach B. Each train has provision for two disabled passengers in coach A, and storage for two bicycles in coach C.[6]

Early reliability problems meant that some services were operated by old rolling stock at short notice.[7][8] Remedial work included improving brakes and bogies,[9] and the reliability of the units is now greatly improved.[10]

Class 175 Coradias are fitted with a passenger information system,[1] which consists of onboard LED display and audio announcements of train destinations and arrivals. However, problems with its operation led to its not being used by Arriva Trains Wales (ATW) when it acquired the trains; not using it meant that the LED destination displays on the front and rear of the train were not illuminated. The system was reprogrammed in 2007 for new routes, which included Welsh spellings on the information screens, as well as the implementation of a chime, signalling the start of an announcement to passengers.

The entire Class 175 fleet was operated by First North Western from their introduction in 2000 until October 2003, when franchise changes led to North Wales Coast Line services being transferred to Wales and Borders; as a result most of the fleet was then used by Wales and Borders: First North Western's branding was removed from all the units, but the livery remained largely the same.[11]

The fleet was transferred to Wales and Borders' successor Arriva Trains Wales in 2004, with some being sub-leased to First Transpennine Express, who took over First North Western's long-distance routes. First Transpennine took delivery of new Class 185 Pennine units in 2006, and the sub-leased Class 175s returned to ATW. The units have been based at the Chester depot throughout, and they have been operated in Wales, North-West England and the West Midlands.

From their introduction in 2000,[12] First North Western (FNW) operated the Class 175s until 2003, when the fleet was transferred to Arriva Trains Wales.

The units were used on various services:

In 2003, the trains transferred to the Wales and Borders franchise and subsequently ATW. However, under a contractual agreement, 11 units were leased back daily from ATW to FNW and then later to First TransPennine Express for use on the Manchester Airport to Blackpool and Cumbria services until mid-December 2006, when that contract expired. They also found use on one morning peak service between Chester and Manchester Piccadilly via Altrincham, which continued to be operated by a Class 175 until December 2004.

175113 rounds the bend into Deganwy with a service from Llandudno.

The entire Class 175 Coradia fleet was transferred to ATW when it took over responsibility for the North Wales Coast Line in 2004. The fleet is based at Chester Depot.

Since fully taking over the fleet ATW now uses Class 175s on Cardiff Central to Manchester and Holyhead service. Some South Wales bound services continue beyond Cardiff to Maesteg, Carmarthen and Milford Haven. They also continue to operate in the North West on Llandudno to Manchester Piccadilly services and the three trains daily extend to Manchester Airport. Since the installation of ERTMS signalling on the Cambrian Coast the Class 175s are not permitted to travel West of Shrewsbury to Aberystwyth and Pwllheli.

They have been cleared by Network Rail to operate the lines from Cardiff Central to Maesteg,[13] Cheltenham,[14] and Ebbw Vale.[15]

Some of the class have received names:

All except for Eisteddfod Genedlaethol Cymru were named by First North Western. The nameplates have now all been removed as the fleet now wears standard Arriva colours.[23] 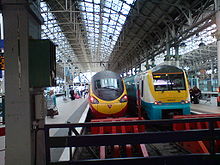 175007 sits side-by-side with a Virgin Pendolino at Manchester Piccadilly.