The Siemens Desiro is a family of diesel or electric multiple unit passenger trains.[1] The main variants are the Desiro Classic, Desiro ML, Desiro UK and the future Desiro City and Desiro RUS. The trains are mostly used for commuter and regional services,[1] and their rapid acceleration makes them suitable for services with short intervals between stations. The design is flexible, and has become common in many European countries.

Austrian Federal Railways (ÖBB) is currently using about 60 diesel-powered Desiro trains designated as ÖBB 5022. These are based on the Class 642 used by Deutsche Bahn, but have some additional safety equipment. 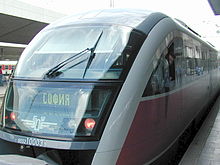 In 2005 and 2006, the Bulgarian State Railways began operating Desiro trains as part of a 67 million Euro deal with Siemens AG for a total of 25 Diesel multiple units.[2] As of 22 March 2006, 16 trains had been delivered, with many of them operating on the Sofia-Kyustendil-Sofia line. Another 117 million Euro deal for 25 EMUs has also been signed with Siemens AG. The EMUs were fitted out in Varna, where BDZ and Siemens AG are intending to establish a joint venture company. The EMUs are designated classes 30 and 31 and are servicing traffic in the Sofia and Plovdiv areas.

In Denmark DSB has rented 12 Desiro trains since 2002. The trains are primarily used between Odense and Svendborg and between Odense and Fredericia. On July 2, 2009 DSB signed a contract of eight trains from Siemens for Grenaabanen, which entered service on December 12, 2010, with an option for 92 more.[3] 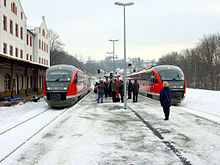 Germany's Deutsche Bahn introduced two-car Desiro DMUs for local services in 2000. With a top speed of 120 km/h, these Class 642 units are mainly used on branch lines and regional lines. Besides the 234 units purchased by DB until 2007, various private German rail companies are also using Desiro DMUs.

The Class 642 is equipped with two MAN diesel engines with an output of 275 or 315 kW each and hydro-mechanical transmission with retarders. It typically contains 100 seats. When linked together with Scharfenberg couplers, up to three trainsets can be operated together. The Desiros are quite popular with most passengers, thanks to their good acceleration. Because they have often replaced push/pull trains, their shorter journey times, such as on the Müglitzbahn, have encouraged greater passenger numbers.

Originally DB intended to operate together modern DMUs purchased from different manufacturers, but due to software incompatibilities this proved to be impossible. Therefore the Class 642 can only be mechanically coupled with other DMUs like the Class 643. 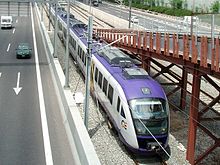 In Greece eight diesel DMU-2 Desiro trains (OSE class 660) were temporarily in service with the Hellenic Railways Organisation (OSE) during 2004–2006, and again in 2007 on the Athens–Chalkida line and on the Athens suburban railway lines (Proastiakos). Afterwards they were returned to their owner (Hellenic Shipyards S.A.) in December 2007. In the late 2008 Hellenic Shipyards/MAN-FERROSTAAL leased the 8 units to Hungary with a contract for 20 years.[4]

OSE also operates twenty (20) electric Desiro EMU-5 (OSE class 460) equipped for the 25-kV overhead catenary system. They operate on the Kiato–Athens International Airport suburban line and as a stopping service on the mainline between Thessaloniki and Larissa, which is also advertised as a suburban service.

At present 31 diesel Desiros are in service with MÁV (including the 8 units from Greece), mainly as suburban trains on the secondary line between Budapest-Esztergom and Budapest - Lajosmizse and as an InterCity between Budapest and Baja. On weekends the units also used as peak inter-city trains from Budapest to Baja and Sátoraljaújhely and as fast trains from Budapest to Tapolca. During the summer months (when fewer units are used on the Budapest suburban routes) Desiros appear on some local train diagram on the norther shore of the Lake Balaton. 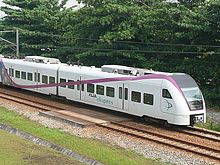 These EMUs have a maximum commercial speed of 160 km/h. 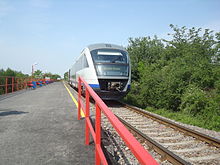 Căile Ferate Române (CFR), Romania's national railway operator, is one of the largest users of the Siemens Desiro trainsets (as the light train variant). CFR, which is currently undergoing modernisation, has bought 120 diesel Desiro trainsets and uses them for all types of train, including its "Rapid", "Accelerat" and "Personal" inter-city services, but mainly on its "Accelerat" trains. There was some criticism of the use of Desiros for CFR's long-distance services because they were considered to be uncomfortable. CFR has recently refitted them, and is now using Desiros mainly on its medium- and short-distance routes. For example, it is planning to use them as part of a proposed commuter link in Bucharest and Ilfov county. For more information on routes, see Căile Ferate Române. 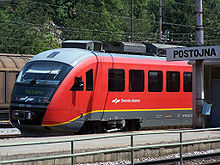 SŽ Series 312 at the Postojna station

Slovenian Railways operates electric Desiro units that are designated as DESIRO EMG 312 SR 31E. They are used as commuter stopping trains on electrified lines i.e. from Ljubljana to Koper, Jesenice (via Kranj), Maribor and Dobova (via Zidani Most).

Mountain Rail, one of two competing coalitions bidding on a large portion of FasTracks in Denver, appear to pitching a Siemens Desiro ML derived vehicle that is FRA compliant. Both EMU and DMU units would be used for the Northwest Corridor, North Metro Corridor and Gold Line. 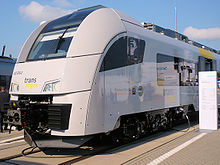 Desiro ML is used by the private rail operator trans regio for regional services between Cologne and Mainz on the left bank of the Rhine.[8][dead link] The EMUs are leased from Angel Trains and received the class number 460 by the Eisenbahnbundesamt, the federal railway authority (the unpowered middle carriages have the class number 860). The 15 kV AC overhead line EMUs have a top speed of 160 km/h; however they are limited by the EBA to 150 km/h on account of insufficient braking power from 160 km/h. All cars use conventional bogies and additional middle carriages can be added later. 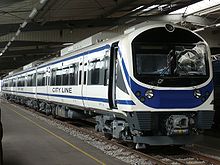 Siemens uses the name Desiro UK for the DMU and EMU trains operated by various United Kingdom train operators. These trains have a completely different design to the above-mentioned light train variant. The trainsets have modern equipment such as toilet waste retention tanks, ergonomic seats, and automated information displays and spoken announcements. All the units are owned by ROSCOs (Rolling Stock Operating Company) with the electric units owned by Angel Trains except the class 350/2s which are owned by Porterbrook, class 380s which are owned by HSBC Rail, while the diesel units are owned by HSBC Rail. Angel, Porterbrook & HSBC Rail lease their units to the train operators.

The first electric Desiro UK units were ordered by South West Trains for both short and long distance service out of Waterloo station to Alton, Basingstoke and the Hampshire/Dorset coast. They became two different classes, both of which use the 750V DC third-rail power supply. One hundred and ten Class 450 four-car units for commuter services which entered service in 2003. Forty five Class 444 five-car units for long-distance inter-city services entered service in 2004. An additional order for a further seventeen Class 450 units was placed with the trains being in service by late 2006/early 2007.

As part of the modernisation of the West Coast Main Line the former Strategic Rail Authority ordered thirty Class 350 dual voltage sets for use on stopping services.[when?] They are operated by London Midland. These units were originally ordered as Class 450 third-rail units for South West Trains, but following a review by the Strategic Rail Authority they were diverted to the West Coast main line. The dual-voltage capability has only been used in service on temporary loan to Southern on Milton Keynes Central - East Croydon services whilst covering for a shortfall of Southern class 377 Electrostar units. The units have been praised for their air conditioning, accessibility and performance, but criticised for their comfort (newer units have 3+2 seating). Thirty Class 350/1 four-car units entered service in 2005, and in 2008/9 a further thirty seven Class 350/2 four-car units entered service.

On 11 July 2008, First ScotRail ordered a number of Class 380 EMUs for delivery in 2010. The order was for 22 three-car and 16 four-car units.[10] First enter service began 8 December 2010. Inverclyde Line, Ayrshire Coast Line of the Class 318, Class 334 "Juniper" was introduced to replace the fleet. And the North Berwick line Class 322 trains have been replaced.

To fulfil their franchise commitment, First TransPennine Express ordered the first diesel variant of the Desiro UK for use on its inter-city services across the north of England, and it is also now being used on West Coast Main Line services to Edinburgh and Glasgow. 51 three-car units classed as Class 185 entered service in 2006.

Desiro City is a planned high-capacity commuter EMU for the UK market building on the Desiro UK and Desiro Main Line, with a reduction in weight and energy use and 'fly-by-wire' controls.[11]

A consortium led by Siemens is preferred bidder for the Thameslink rolling stock programme.[12] Around 1200 dual-system 750 V DC/25 kV AC Desiro City vehicles will be supplied. They will operate in a 12-car formation set, and be suitable for use with ETCS.[citation needed] The Desiro City design has also been put forward for the Crossrail rolling stock contract;[13] Siemens was placed on the tender shortlist in 2011 with five other manufacturers.[14]

In December 2009 Russian Railways ordered 38 Desiro RUS trains,[16] and in September 2010 a further 16[17] 5-car Desiro RUS units with deliveries starting in 2013 for use during the 2014 Winter Olympics in Sochi and 2013 Summer Universiade in Kazan, with the latter 16 trains to be partly built in Russia.

SBB-CFF-FFS operates double-decker, or bilevel, EMUs designated as class SBB RABe 514. They are used as commuter trains in Zürich, where 61 four-car sets have been in operation since 2006.