The British Rail Class 150 "Sprinter" diesel multiple units (DMUs) were built by BREL from 1984-87. A total of 137 units were built in three main subclasses, replacing many of the earlier first-generation "Heritage" DMUs.

At the beginning of the 1980s, British Rail (BR) had a large fleet of ageing "Heritage" DMUs built to many different designs in the late 1950s and early 1960s. Some of the more reliable types were retained and refurbished. However, BR decided to replace many of the non-standard or unreliable types with new 2nd generation units, built to modern standards. Two different types were pursued; low-cost "Pacers" built using bus parts and used on short-distance services; and "Sprinters" based on BR's Mark 3 bodyshell design, and used for longer-distance services.[4]

The two types of unit were exhaustively tested, with the more successful leading to further orders for production units. In the event, the two Class 150 units proved to be more reliable, and as a result, an order for 50 two-car units was placed with BREL. These units follow the design specifications of later production units, but unlike the production models they are 3 car units and, with the exception of some re marshalling done later to include a 150/2 car in the middle of a 150/1 set, no class 150 was built as a 3 car unit. Both cab doors are air operated unlike the class 150/1 production model, but seen in the 150/2.

Both prototypes are still in service with London Midland. 150002 proved to be the worse of the two for reliability and was consequently chosen for use as the testbed for the Class 158, being re-geared to a maximum speed of 90 mph (140 km/h) and fitted with Cummins engines and Voith transmission and a Class 158 interior. One car was fitted with the Class 151 Twin Disc 'hot-shift' transmission which it used successfully once the control software was sorted out. To distinguish this unit it was reclassified as the Class 154. It has since been returned to its original state and number. 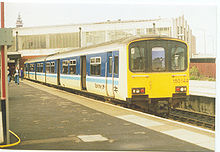 This second batch of fifty units were classified as Class 150/1 and numbered in the range 150101-150. Like the prototype units, they did not have front-end gangway connections. These units were mainly concentrated around Birmingham and Manchester, and in later years were restricted mainly to commuter services.

The final batch of 85 two-car units were built with front-end gangway connections, which allowed passengers to move between two units that were working in multiple. These units were classified as Class 150/2 and numbered in the range 150201-285. They were used on longer-distance services. The end gangways make them very similar in appearance to the Class 317/2 EMU trains, also based on the Mark 3 bodyshell.

Some of the Class 150/2 units were later disbanded, and the vehicles used to make some of the Birmingham and Manchester-based Class 150/1 units into 3-car sets. The units in Manchester were later returned to their original configuration, but the Birmingham-based units were renumbered into the 1500xx range by subtracting 100 from the previous number (e.g. 150103 became 150003). This also gave an extra operational advantage of there being an extra set of passenger door controls with in the train for use of the Guard, this made it easier for them to collect revenue on the train with out having to run the full length of the unit to release the doors at a station.

The 450 Class is built using the Class 150 bodyshell and is operated by Northern Ireland Railways.

One further unit was built specifically for testing duties. Originally numbered in the Class 180 series, the unit is now in the departmental Class 950 series, numbered 950001 and carries the yellow Network Rail livery. 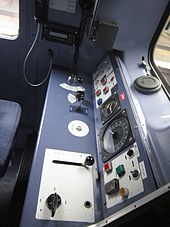 When introduced, the Class 150s had unique interior door open/close buttons that were square, blue in the North of England/Southern Scotland and Yellow/orange in the south, and lit up turquoise in the North or bright yellow in the South of England/Wales when the doors were enabled.

The illumination feature was intended to aid visually impaired people, although they did not meet current standards set out by disability regulations because they had no raised braille and are too small for some disabled people to locate.

As a result of this, the blue buttons are being replaced by the standard EAO series 56 'easy to see, easy to press' raised circular door button, with braille writing for the visually impaired, over a yellow surround to comply with the Rail Vehicle Accessibility Regulations.[6] 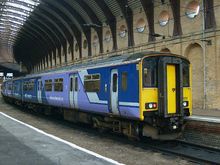 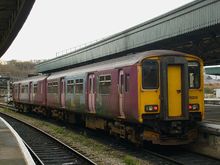 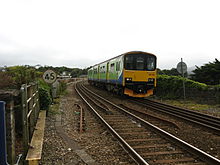 After British Rail ceased to exist the fleet passed to Wales and West, which was later split up into Wessex Trains and Wales and Borders (later Arriva Trains Wales) in 2001

On 10 December 2006, the fleet was reduced by eight, with the others being handed to Arriva Trains Wales. 15 additional Class 150/1 units were expected for the region in 2009 but these have been delayed until late 2010 - late 2011 Due to the already late delivery of the Class 172s from Bombardier These were due to be six from London Overground and nine from London Midland. These units are expected to replace Class 142 Pacers and the Arriva Trains Wales Class 150 Sprinters, The single Class 158 on weekly hire from South West Trains and the Cardiff to Weston Super Mare & Paignton Loco Hauled Services, with the 158 & Loco Hauled diagram to go first.

By February 2011, Both Class 150121 & 150127 have been refreshed internally & externally by Pullman Rail in Cardiff Canton, with the work including a repaint into First Great Westerns Plain Blue & Rubine Red livery. 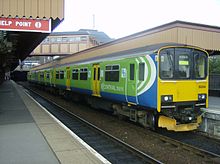 Central Trains/Centro refurbished Class 150/1 Sprinter No. 150014 at Birmingham Moor Street. As Central Trains no longer exists, this Class 150 is now with London Midland.

Following privatisation both Silverlink and Central Trains operated Class 150s in the midland regions of England.

The Central Trains Class 150 units were mainly used on regional services around the Midlands; they were also used on the Birmingham to Lincoln, Derby to Matlock, Nottingham to Worksop, and Crewe to Skegness routes. When Centro was replaced by Network West Midlands, some units were repainted into the new livery (as seen in the photo). Some were also partly grouped into 150/1 and 150/2 combined units, having 150/1 ends and a 150/2 unit as a centre car.[citation needed]

In November 2007, London Midland acquired much of these routes as part of the franchise change and inherited the Class 150 units used previously by both of these companies.

London Midland's large fleet includes the two prototype units 150001 and 150002, more than half of the 150/1 sub-class, and a number of examples of 150/2. The fleet is based at Tyseley depot in south-east Birmingham and is concentrated on local stopping and semi-fast services on the Snow Hill Lines - Great Malvern, Worcester, Kidderminster and Stourbridge, along the Jewellery Line to Birmingham Snow Hill, then on to Shirley and Stratford-upon-Avon, or Solihull and Dorridge. In peak hours they can also be seen working services to Leamington Spa and also work a few services a week over the Lickey Incline between Worcester and Birmingham New Street. At the weekend one of the fleet also runs to Rugeley Trent Valley and works the Birmingham New Street to Rugeley Trent Valley services which are otherwise operated by Class 170s and Class 153s.[citation needed]

London Midland has ordered Class 172 replacements for its class 150s. It hopes to retain some of the 150s as additional capacity. However, to do this London Midland will have to prove to DfT that it has more need for them than First Great Western and Northern Rail.[9]

Following privatisation, Wales and Borders continued to use the fleet of Class 150 units on branch-line services as well as on the commuter services around Cardiff known as the Valley Lines. They have also been used on the Borderlands Line between Bidston (Merseyside) and Wrexham and on the Conwy Valley Line, when a single car Class 153 does not provide sufficient capacity.

The 'Wales and Borders' franchise passed to Arriva Trains Wales, which progressively built up its fleet of Class 150s with units acquired from various other franchises. The first expansion of the fleet was in May 2005, when twelve ScotRail units moved to Arriva. On 10 December 2006, Arriva Trains Wales received eight further Class 150s from First Great Western (in ex-Wessex livery), as part of a national fleet shuffle. In November 2007, ten Class 150/2 units were transferred from the West Midlands as the Central Trains franchise came to an end.[citation needed]

In 2008 six of these units were sub-leased to First Great Western to allow several Class 158s to be reformed into 3-coach units to provide extra capacity on Portsmouth Harbour-Cardiff services.[citation needed]

During the strikes by London Midland staff in early 2011, some ATW 150s were used on the Wolverhampton to Shrewsbury Line to cover the gaps in service left by cancelled LM trains.[citation needed]

ScotRail, and its successor First ScotRail operated 18 150s out of Edinburgh Waverley on Fife Circle services. Other workings included Dundee and Carnoustie, as well as operating alongside other DMUs such as Class 158s on the Crossrail services between Newcraighall through Edinburgh to Bathgate, Stirling, Dunblane and occasionally Perth. In May 2005 all 18 units were transferred to Arriva Trains Wales.[10] 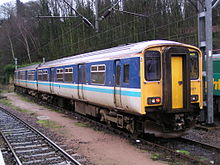 Anglia Railways initially inherited a small fleet of nine Class 150/2 units, later supplemented with a tenth. The units were based at Norwich Crown Point depot, and put to use on rural services in Suffolk and Norfolk. Lines using the units included the Bittern Line, the East Suffolk Line, and the Wherry Lines, as well as services from Ipswich to Cambridge. One unit each weekday was sub-leased to First Great Eastern for use on the Sudbury Branch Line. Anglia Railways named almost of its fleet after famous local figures.

150245 was the only unit not to be named. On 1 April 2004, Anglia Railways became part of the new 'one' franchise. The Class 150 units were transferred to Arriva Trains Wales (no. 150245) and Central Trains (all other units), having been replaced by Class 156 units from Central Trains. 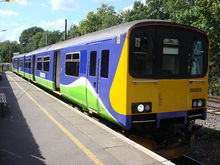 The former North London Lines franchise operator, Silverlink, had eight Class 150s; seven of the units were originally cascaded from Central Trains following delivery of new Turbostar units in 2000. They replaced the ageing fleet of Class 117 and Class 121 units. The eighth unit, no. 150121, was transferred to Silverlink in late 2005.

London Overground, which took over the North London Line, inherited the eight Class 150/1 units. Six of these were employed on the Gospel Oak to Barking Line, while two were sent on long-term loan to First Great Western.

All units had names.[11] The majority of the names are references to the Marston Vale Line on which they operated during Silverlink's franchise. Leslie Crabbe was a long-standing railway employee, who worked on the route. Richard Crane is the chairman of the Bletchley to Bedford Rail Users Association who has campaigned for the line to be retained and expanded.[12] Three of the names (marked with an asterisk) were inherited from the previously incumbent British Rail Class 121 units.

By the end of October 2010, all London Overground's Class 150/1s had been replaced by a new fleet of eight two-car Class 172 units operating exclusively on the Gospel Oak to Barking Line. Their final use was on 28 October 2010 when unit 150128 formed the 19:02 Barking to Gospel Oak service. The six units were cascaded to First Great Western, together with nine of the London Midland fleet.[14]