The N3 road is a national primary road in Ireland, running between Dublin, Cavan and the border with County Fermanagh. The A509 and A46 roads in Northern Ireland form part of an overall route connecting to Enniskillen, and northwest to the border again where the N3 reappears to serve Ballyshannon in County Donegal.

Rush hour congestion between Navan and Dublin city is very heavy (up to 22,000 vehicles per day on parts of the N3 in 2002), and problems occur at most built-up areas between these points. A tolled motorway bypass replacement, the M3 motorway, was opened to traffic on the 4th of June 2010. The bypassed section from Clonee to the border with County Cavan has been reclassified as the R147. 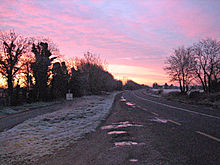 The old N3, between Clonee and Dunshaughlin

The route is known as the Navan Road as it leaves Dublin, passing near the Phoenix Park's northeastern exit and bypassing Castleknock.

It passes through a major junction with the M50 motorway and then bypasses Blanchardstown, Mulhuddart and Clonee with a dual carriageway. The dual carriageway changes into the M3 motorway near the Meath border by-passing Dunshaughlin and Navan. Near Kells the route continues as the N3 dual carriage way to the border with County Cavan. It then passes through Virginia, past Cavan Town and continues past Butlersbridge and through Belturbet. The route then crosses the border with Northern Ireland, becoming the A509 to Enniskillen. The A46 road connects Enniskillen and the Donegal border, becoming the N3 across the border at Belleek, and connecting to Ballyshannon.

The National Roads Authority in conjunction with Cavan and Donegal County Councils plan major improvements to the N3 route in Ulster. It is currently planned that the Virginia bypass will be developed as 12.5 kilometres of type two dual carriageway. Type two dual carriageway has reduced width or no hard shoulders and also a reduced width median. This approach significantly cuts land acquisition costs.

Part of the old N3 route has been bypassed by the construction of 51 kilometres of new motorway. This stretch of motorway, designated M3, was opened on June 4, 2010. The M3 begins near the end of the dual carriageway outside Clonee and terminates south west of Kells just before the N52. The entire scheme does not terminate at this point as a new realigned N3 continues to bypass Kells before terminating near the County Cavan border. The scheme also includes the N52 Kells northern bypass. Since completion, the M3 now bypasses Dunshaughlin, Navan, and Kells.

The motorway was contested because the route passes near the Hill of Tara and through the archaeologically rich Tara-Skryne valley or Gabhra. The planned route corridor was approved by An Bord Pleanála (Ireland's planning appeals board) in August 2003.[1][2]

On 30 September 2008, the Department of Transport announced the second round of proposed motorway reclassifications under the Roads Act 2007. A short section of the existing dual-carriageway N3 bypassing Clonee, from northwest of Mulhuddart to the start of the M3 toll motorway scheme, is affected by this. Following a public consultation process, on 10 July 2009 the Minister for Transport, Noel Dempsey, made a Statutory Instrument reclassifying this section of the N3 as motorway effective from 28 August 2009.[3] It was the first section of M3 to come into being.