Dublin Bus (Irish: Bus Átha Cliath) is a public transport operator in Ireland. It operates an extensive bus network of 172 radial, cross-city and peripheral routes and 18 night routes in the city of Dublin and the Greater Dublin Area. The company, established in 1987, is a subsidiary of Córas Iompair Éireann which is owned by the Government of Ireland. Dublin Bus operates the vast majority of bus services in Dublin but in recent years an increasing number of other bus companies have received licences to operate in Dublin from the Department of Transport.

Dublin Bus is the main transport provider in the Greater Dublin Area and carries 70% of all peak time public transport users into Dublin.[1] The network carries on average 500,000 customers a day and 150 million a year.[1] The company currently employs around 3,729 full-time staff members and utilises a fleet of 1,031 buses.[1] 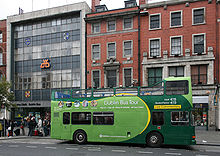 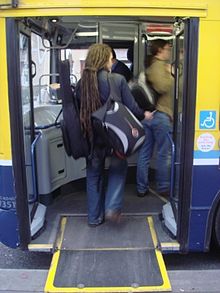 Dublin Bus fares are generally calculated on a stage system based on distance travelled. There are several different levels of fares, which apply on most services. Certain routes (particularly Xpresso, see below) use a different fare system.

Dublin Bus follows an "exact fare - no change" policy on almost all buses for passengers who pay cash fares - to minimise the risk of staff being robbed, passengers must place the exact fare in coins (notes are not accepted as the counting machines in the garages cannot process them) in the fare box before the ticket is issued; in the case of overpayment a "change ticket" is issued which can only be exchanged for cash at the company's head office on O'Connell Street. The only exception are routes 747 and 748, the express routes to and from Dublin Airport, where with a minimum fare of €6, banknotes are accepted and change is given in cash.

There are several types of pre-paid tickets available, including:

All prepaid tickets must be validated in a machine by the door of the bus at the start of each journey.

Old age pensioners and certain other people are allow to travel free of charge; this is part of the national "Free Travel Pass"[2] system operated by the Department of Social Protection.

Minimum fares are payable on some services in order to discourage passengers wishing to travel short distances from using seats which could be used by those who wish to travel longer distances. A standard fare (currently €50) is theoretically payable by those who evade payment of the full fare for the journey, but is rarely collected.

The main radial routes are focused upon Dublin's sixteen Quality Bus Corridors which provide buses with daytime access to the city centre.

Express buses (branded "Xpresso") operate on similar routes, but have a limited number of stops and a higher minimum fare.

Dublin Bus operates a "Nitelink" service of approximately 24 routes overnight which up until January 2009 ran between Monday and Saturday, with the greatest service frequency being on Friday and Saturday nights, however the midweek schedule was scrapped causing consternation with commuters. Special (higher) fares apply on Nitelink buses.

No "Park and Ride" services are available.

There is also a unique Ghost Bus Tour through some of the supposedly haunted places in the city.

In April 2010, Dublin Bus announced it would be simplifying many of its routes around the city in order to create better efficiency. However, as part of these measures, the company also announced that 150 jobs would be lost. [3][4]

As the vehicles become of age they have been withdrawn to make way for newer technology. Types of significance such as the Bombardier/GAC (Irish built) have been preserved by the National Transport Museum of Howth who house R1 (the first double decker service bus in Ireland).

Many ex-CIE types have been acquired for preservation by private preservationists, some of whom associated with the Transport Enthusiasts Club (TEC). The vehicles are garaged, restored and run by the owners without state funds and take part in films, television programs and in vintage rallys. One event was CIE60th. The 30 October 2005 saw Dublin Bus host CIE60th in the new Harristown depot. This event was done in co-ordination with the Transport Enthusiasts Club. Buses new and old were on display showing the contrast and how far the company had come.

Dublin's main bus operator was formerly the Dublin United Transport Company. This company was incorporated into CIÉ in 1945, but regained partial autonomy in 1987 when Dublin Bus was created as a wholly owned subsidiary company of CIÉ.

Accidents which made headline news;

On 21 February 2004 at Wellington Quay, Dublin, a bus mounted on a pavement and ploughed into a queue of 30 people, killing five and injuring 14. The driver was charged with dangerous driving, his trial began in February 2007 at Dublin Circuit Criminal Court. He has since been found not guilty of any misdoings.[8] 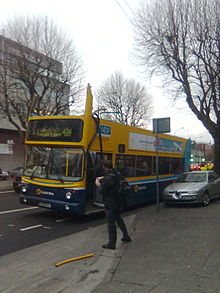 On 5 February 2009 a bus travelling from Abbey Street to Artane collided with a tree on North Strand Road and the entire roof section was torn off. The driver was treated in hospital with shock but apart from that there was no injuries as no passengers were seated in the upper saloon. The bus was an Alexander ALX400.[9]

On 16 September 2009 at 3pm, a collision between the Red Line Luas and a number 16 Dublin Bus from Ballinteer to Santry in Dublin City Centre at the intersection of Abbey Street and O'Connell Street injured 21 people. Three people, including the Luas driver, were cut out of the wreckage. The Luas was derailed in the accident. Two female passengers remained trapped on the bus for up to 45 minutes after the crash.[10][11][12][13][14][15][16][17]

Example of real-time passenger information system, currently being rolled out

The Bus Arrival Information Service is being rolled out across Dublin, and provides real time estimates of bus arrivals at certain bus stops, based on current GPS locations of buses. It is being run by the National Transport Authority under the brand Transport for Ireland, a single portal providing information on public transport in Ireland.