/ˈdrɒhədə/; /ˈdrɔːdə/; Irish: Droichead Átha, meaning "bridge of the ford") is an industrial and port town in County Louth on the east coast of Ireland, 56 km (35 mi) north of Dublin. It is the last bridging point on the River Boyne before it enters the Irish Sea.

As the River Boyne divides the dioceses of Armagh and Meath, Drogheda was founded as two separate towns, Drogheda-in-Meath (for which a charter was granted in 1194) and Drogheda-in-Oriel (or 'Uriel') as County Louth was then known. In 1412 these two towns were united and Drogheda became a 'County Corporate', styled as 'the County of the Town of Drogheda'. Drogheda continued as a County Borough until the setting up of County Councils, through the enactment of the Local Government (Ireland) Act 1898, which saw all of Drogheda, including a large area south of the Boyne, become part of an extended County Louth. With the passing of the County of Louth and Borough of Drogheda (Boundaries) Provisional Order, 1976, County Louth again grew larger at the expense of County Meath. The boundary was further altered in 1994 by the Local Government (Boundaries) (Town Elections) Regulations 1994. The 2007-2013 Meath County Development Plan recognises the Meath environs of Drogheda as a primary growth centre on a par with Navan.

In recent years Drogheda's economy has diversified from its traditional industries, with an increasing number of people employed in the retail, services and technology sectors. The town also has a community of independent artists and musicians who have been looking to the local economy rather than Dublin for employment.

The town is situated in an area with an abundance of archaeological monuments dating from the Neolithic period onwards, of which the large Passage Tombs of Newgrange, Knowth and Dowth are probably the best known.[2] The remarkable density of archaeological sites of the prehistoric and Early Christian periods uncovered in recent years in the course of development, notably during construction of the Northern Motorway: Gormanston to Monasterboice, or 'Drogheda Bypass', have shown that the hinterland of Drogheda has been a settled landscape for millennia.[3] 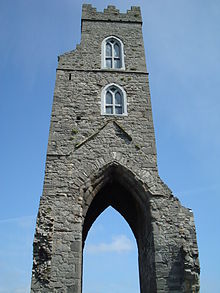 However, Bradley, in his 1978 study of the history and archaeology of the town, stated that "neither the documentary nor the archaeological evidence indicates that there was any settlement at the town prior to the coming of the Normans".[4] The results of the numerous and often large-scale excavations carried out within the area of the medieval town in the past ten years appear to have confirmed this statement.[5]

The earliest monument in the town is the motte-and-bailey castle, now known as Millmount Fort, which overlooks the town from a bluff on the south bank of the Boyne, and which was probably erected by the Norman Lord of Meath, Hugh de Lacy sometime before 1186. The earliest known town charter is that granted to Drogheda-in-Meath by Walter de lacy in 1194.[6] Sometimes it was also spelled "Tredagh".

Drogheda was an important walled town in the English Pale in the medieval period. It frequently hosted meetings of the Irish Parliament at that time. In a spill-over from the War of the Roses, according to R.J.Mitchell in John Tiptoft, Earl of Worcester, the Earl of Desmond and his two youngest sons (still children) were executed there on Valentine's Day, 1468, on orders of the Earl of Worcester, the Lord Deputy of Ireland. It later came to light (see Robert Fabyan, "The New Chronicles of England and France"), that the Queen herself was implicated in the orders given. The parliament was moved to the town in 1494 and passed Poynings' Law, the most significant legislation in Irish history, a year later. This effectively subordinated the Irish Parliament's legislative powers to the King and his English Council.

The town was besieged twice during the Irish Confederate Wars. On the second occasion it was taken by Oliver Cromwell in September 1649, as part of the Cromwellian conquest of Ireland and it was the site of an infamous massacre of the Royalist defenders. In his own words after the siege of Drogheda, "When they submitted, their officers were knocked on the head, and every tenth man of the soldiers killed and the rest shipped to Barbados."[7] In a colourful aside, from 1655 runaway slaves, both Irish Redlegs and African Maroons began attacking local militia forces, killing plantation-owners and destroying crops in Barbados. It took the authorities the best part of two years to suppress the disorder .

The Earldom of Drogheda was created in the Peerage of Ireland in 1661.

In 1825 the Drogheda Steam Packet Company was formed in the town, providing shipping services to Liverpool.

A Norman element on Drogheda's coat of arms is its centrepiece, St. Laurence's Gate. The three lions which flank the Norman barbican and the star and crescent, similar to those on the coat of arms of Portsmouth, are taken from Richard The Lionheart's coat of arms who gave both towns their charters. On the other side of the barbican is a ship denoting Drogheda's status as an important port. The town's motto Deus praesidium, mercatura decus translates as "God our strength, merchandise our glory".[9]

A local myth has it that the star and crescent were included in the town arms after the Ottoman Empire (predecessor to the Republic of Turkey) sent ships laden with food to Drogheda during the Irish famine. However, there are no records of this with the Drogheda Port, and the star and crescent predate the famine.[10]

In 1921 the shrunken head of Saint Oliver Plunkett, who was executed in London in 1681, was put on display in St. Peter's Church, where it remains today. The church is located on West Street, which is the main street in the town.

Drogheda has a thriving arts scene, across many sectors.

The town hosts the annual Samba festival every summer, where Samba bands from around the world converge on the town for a week of drumming and parades. It is also home to the Calipo theatre company which specialises in multi-media productions and has achieved considerable success in Ireland and abroad.[citation needed]

Drogheda also hosts the worlds longest-running annual graffiti art event on the undercrofts of the Bridge of Peace every August. This event has seen some of the worlds top artists visit the site since the walls were first painted in 1993.[citation needed]

The town also supports one of the largest and most successful[citation needed] youth theatres in Ireland (Droichead Youth Theatre) which has toured to Belfast, London, Italy, and Sweden. The addition of the Little Duke Theatre company in Duke Street, in the old Julian Blinds building, adds to this scene. The Municipal Centre in Stockwell Street acts as a base for most of the town's artists, under the umbrella of the Droichead Arts Centre, and featuring a gallery space and a theatre. The former Garda (Police) station in West Street is now a satellite site of the Droichead Arts Centre. This site is called Barlow House.

Drogheda also boasts a long tradition of its very own pantomime, which is usually held in January/February of each year. These productions have been going for roughly 60 years and are considered a great source of recreaction for the town. Many locations have been used for staging productions (most notably the old Parochial Centre) although the Pantomime Society have found a new and more permanent home in the form of the T.L.T. (Tommy Leddy Theatre), located beside the Sound Shop in the East Coast Business Park.

Drogheda has also been the scene for some of the most important contemporary music events in Ireland. Louth Contemporary Music Society invited the US composer Terry Riley to perform in Drogheda in 2007, Arvo Pärt's first Irish commission and visit to the country was in Drogheda in February 2008, Michael Nyman performed in Drogheda in May 2008, John Tavener's Temenos festival was held in October 2008 and the Russian composer Alexander Knaifel was the focus of a portrait concert as part of the Drogheda Arts festival on 1 May 2009.[2]

The composer and Aosdána member, Michael Holohan, has lived in Drogheda since 1983. His compositions have been performed and broadcast both at home and abroad. Career highlights in Drogheda include 'Cromwell' 1994 (RTECO), 'The Mass of Fire' 1995 (RTE live broadcast) and 'No Sanctuary' 1997 (in the Augustinian Church with Nobel Laureate and poet Seamus Heaney). 'Fields of Blue and White', a CD of his piano music was launched in the National Concert Hall in 2009 and the concert pianist, Therese Fahy, was the recording artist. A keen supporter of the arts he is also a former chairman of the Droichead Arts Centre.

Drogheda has a thriving live music scene at a variety of venues.

The estate in the famous novel and mini-series The Thorn Birds was named after the town of Drogheda. 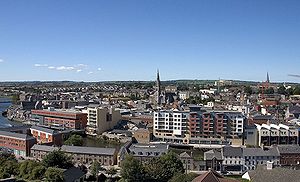 Drogheda in 2005, overlooking the river and St Peter's Church.

With the expansion of the Irish economy in the 1990s, during the "Celtic Tiger" years, Drogheda became one of the main secondary locations for people who work in Dublin to buy a house, as property prices in the capital became prohibitive for many first-time home buyers. This was aided by the expansion of transport infrastructure in the direction of Drogheda i.e. the Swords and Balbriggan bypasses, the Boyne River Bridge and the increased number of commuter trains serving the town. Partly as a result, the downtown area of Drogheda has redeveloped, and two large shopping centres have opened, while several national and international retailers have opened stores. In 2007 the partial pedestrianisation of the town's main street, West Street, was completed. This was not a success from a business point of view and West Street has become a ghost street.

On the south quay in the space of the former Lakeland Dairies premises (an old industrial area), the Scotch Hall Shopping Centre and the D Hotel was completed in November 2005. A new pedestrian bridge extends from the north quay, at Mayoralty Street, into the complex. Phase Two of the development, which will shortly commence construction, will extend further down along the river front, on the site of the former Irish Oil Cake works. It will have an extension to the shopping centre and hotel, new apartments, cinema, and a riverside plaza. 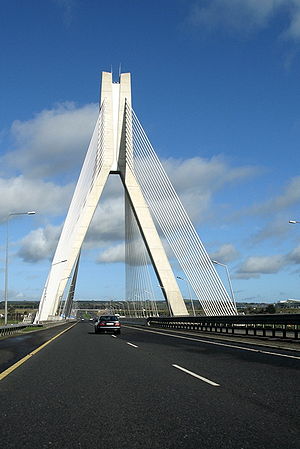 Drogheda is located close to the M1 (E1 Euro Route 1) (main Dublin - Belfast motorway). The Boyne River Bridge carries traffic from the M1, across the River Boyne, 3 km west of the town. It was opened on June 9, 2003 and is the longest cable stayed bridge in Ireland.

Drogheda acquired rail links to Dublin in 1844, Navan in 1850 and Belfast in 1852. Passenger services between Drogheda and Navan were ended in 1958, however the line remains open for freight (Tara Mines/Platin Cement) traffic. In 1966 Drogheda station was renamed "McBride". Drogheda railway station opened on 25 May 1844.[11] Defined by its location as the last crossing point on the Boyne before it reaches the sea, Drogheda has seven bridges in its vicinity.

The local economy of Drogheda, like that of many other towns in Ireland, is changing rapidly. The old industries based around linen and textiles, brewing, shipping and manufacturing have now disappeared or are in decline. In recent times, business has slowed because of the recession and Drogheda faces an increase in unemployment.

There are still a number of large employers in the town, including:

Recently additions to the local economy include:

The opening of the Drogheda bypass has led to the development of two large retail parks adjacent to the motorway, either side of the Boyne cable bridge. On the northside, is the M1 Retail Park and on the southside is the Drogheda Retail Park. 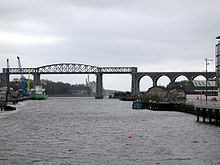 The local radio station is LMFM, broadcasting on 95.8 FM. The headquarters of LM-FM are on Marley's Lane on the south side of the town.