Blue
This article is about the colour. For other uses, see Blue (disambiguation). 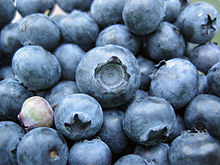 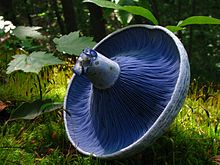 Lactarius indigo is one of only a few blue-coloured mushrooms. 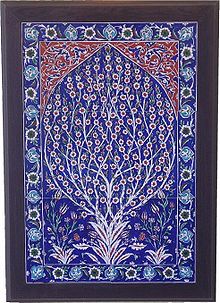 Blue is a colour, the perception of which is evoked by light having a spectrum dominated by energy with a wavelength of roughly 440–490 nm. It is considered one of the additive primary colours. On the HSV Colour Wheel, the complement of blue is yellow; that is, a colour corresponding to an equal mixture of red and green light. On a colour wheel based on traditional colour theory (RYB) where blue was considered a primary colour, its complementary colour is considered to be orange (based on the Munsell colour wheel).[2]

In Modern English, "blue" is one of the basic colour terms, and one of the seven spectral colours, intermediate between violet (purple) and cyan. It comprises a considerable number of identifiable subcategories that can be identified with descriptive terms like navy blue (a dark blue), cyan blue (or "blue-green", on the boundary to the green range), or sky blue (azure).

The word itself was loaned into Middle English from the Old French word bleu, blo " "pale, pallid, discoloured; blue, blue-grey", itself from an Old Frankish *blao.

Bleu replaced Old English blāw "blue" and blǣwen "light blue". The root of all these variations is Proto-Germanic blǣwaz, from Proto-Indo-European *bhlāw-, *bhlēw- "light-coloured, yellow, grey, blue", from *bhel- "to shine, be light or bright", also the root of Old Norse blār and the modern Icelandic blár, and the Scandinavian word blå, which can also refer to other non blue colours. Also in the French, bleau is a contraction of belleaue or belle eau, meaning "beautiful water" (see Fontainebleau). In this vein, "blue" is the colour of beautiful water as it clearly reflects the blue sky. A Scots and Scottish English word for "blue-grey" is blae, from the Middle English bla ("dark blue", from Old Norse blār). Also related is the English word blee meaning "colour, complexion". Ancient Greek lacked a word for blue and Homer called the colour of the sea "wine dark", except that the word kyanos (cyan) was used for dark blue enamel.

The word blue is thought to be cognate with black, blond, originally designating a discoloured, pale, washed-out shade. Through a Proto-Indo-European root, it is also linked with Latin flavus ("yellow"; see flavescent and flavine), with Greek phalos (white), French blanc (white, blank) (borrowed from Old Frankish), and with Russian белый, belyi ("white," see beluga), and Welsh blawr (grey) all of which derive (according to the American Heritage Dictionary) from the Proto-Indo-European root *bhel- meaning "to shine, flash or burn", (more specifically the word bhle-was, which meant light coloured, blue, blond, or yellow), whence came the names of various bright colours, and that of colour black from a derivation meaning "burnt" (other words derived from the root *bhel- include bleach, bleak, blind, blink, blank, blush, blaze, flame, fulminate, flagrant and phlegm).

In the English language, blue may refer to the feeling of sadness. "He was feeling blue". This is because blue was related to rain, or storms, and in Greek mythology, the god Zeus would make rain when he was sad (crying), and a storm when he was angry. Kyanos was a name used in Ancient Greek to refer to dark blue tile (in English it means blue-green or cyan).[3]

Many languages do not have separate terms for blue and or green, instead using a cover term for both (when the issue is discussed in linguistics, this cover term is sometimes called grue in English).

Traditionally, blue has been considered a primary colour in painting, with the secondary colour orange as its complement.

Traditionally natural dyes such as woad and true indigo were used to produce indigo dye used to colour fabrics blue or indigo. These have now largely been replaced by synthetic dyes. 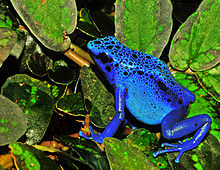 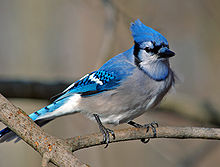 Lasers emitting in the blue region of the spectrum became widely available to the public in 2010 with the release of inexpensive high-powered 445-447nm Laser diode technology. [4] Previously the blue wavelengths were accessible only through DPSS which are comparatively expensive and inefficient, however these technologies are still widely used by the scientific community for applications including Optogenetics, Raman spectroscopy, and Particle image velocimetry, due to their superior beam quality. [5] Blue Gas lasers are also still commonly used for Holography, DNA sequencing, Optical pumping, and other scientific and medical applications. 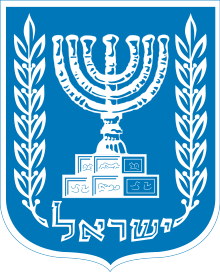 Coat of Arms symbol of Israel 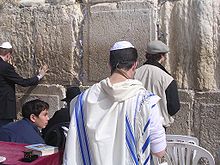 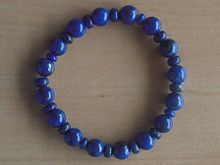 Blue is the colour of the logo of Facebook, an American-based social-networking website, as well as many of its design features

Foster's Lager, an Australian lager sold throughout the world, uses a blue label on this bottle, as well as mostly blue cans

Blue is associated with many large companies and brands, including: 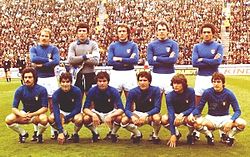 The Italy national football team wear blue in honour of the royal House of Savoy which unified the country.

Many sporting teams make blue their official colour, or use it as detail on kit of a different colour. In addition, the colour is present on the logos of many sports associations.

In international association football, blue is a common colour on kits, as a majority of nations wear the colours of their national flag. A notbale exception is four-time FIFA World Cup winners Italy, who wear a blue kit based on the Azzuro Savoia (Savoy blue) of the royal House of Savoy which unified the Italian states. [26] The team themsleves are known as I Azzuri (the Blues). Another World Cup winning nation with a blue shirt is France, who are known as Les Bleus (the Blues). Two neighbouring countries with two World Cup victories each, Argentina and Uruguay wear a light blue shirt, the former with white stripes. Uruguay are known as the La Celeste, Spanish for 'the sky blue one', while Argentina are known as Los Albicelestes, Spanish for 'the sky blue and whites'. [27]

Football clubs which have won the European Cup or Champions League and wear blue include FC Barcelona of Spain (red and blue stripes), FC Internazionale Milano of Italy (blue and black stripes) and FC Porto of Portugal (blue and white stripes). Another European Cup-winning club, Aston Villa of England, wear light blue detailing on a mostly claret shirt, often as the colour of the sleeves [28]. Clubs which have won the Copa Libertadores, a tournament for South American clubs, and wear blue include six-times winners Boca Juniors of Buenos Aires, Argentina. They wear a blue shirt with a yellow band across. 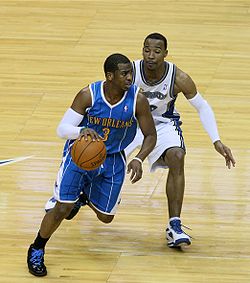 In Major League Baseball, a premier baseball league in the United States of America and Canada, blue is one of the three colours, along with white and red, on the league's official logo. A team from Toronto, Ontario, are the Blue Jays. The Los Angeles Dodgers use blue prominently on their uniforms and the phrase "Dodger Blue" is may be said to describe Dodger fans' "blood". The Texas Rangers also use Blue prominently on their uniforms and logo.

The National Basketball Association, a premier basketball league in the United States and Canada, also has blue as one of the colours on their logo, along with red and white also, as does its female equivalent, the WNBA. The Sacramento Monarchs of the WNBA wear blue. Former NBA player Theodore Edwards was nicknamed "Blue". The only NBA team to wear blue as first choice are the Charlotte Bobcats, however blue is a common away colour for many other franchises.

The National Football League, an American Football league in the United States, also uses blue as one of three colours, along with white and red, on their official logo. The Seattle Seahawks, New York Giants, Buffalo Bills and Detroit Lions feature blue prominently on their uniforms.

The National Hockey League, a premier Ice hockey league in Canada and the United States, does not use blue on its official logo. However, a club in the league from St. Louis, Missouri is named the Blues.