Old Navy is an American clothing brand as well as a chain of stores owned by Gap, Inc.,[1] with corporate operations in San Francisco and San Bruno, California. It is one of the first major corporations to house headquarters in the new Mission Bay district of San Francisco.[2]

Old Navy opened its first stores in Colma, San Leandro and Pittsburg in northern California in 1994.[4] These first three stores were originally constructed as Gap Warehouse stores.[clarification needed] The size and scale of the stores were larger and more diverse than any stores opened by the company before. Within the first year of existence, Old Navy opened 57 stores. As of 2007[update], Old Navy has more than 1,000 stores in the United States and Canada.[5] The largest Old Navy stores are its flagship stores, located in New York City, the Mall of America, Seattle, Chicago and San Francisco.[6] The largest of these is located on Market Street in San Francisco.

In 1994, the creator of Old Navy, Inc., Ken Rapp and the CEO were visiting Paris, France and came upon a cafe distinctly named Old Navy Cafe and it struck a chord with them. (The Old Navy official site says, "Old Navy was named after a cafe in Paris."[7]) In 1999, Old Navy expanded its franchise to 6 locations in Puerto Rico. In 2001, Old Navy opened 12 stores in the Greater Toronto Area in Ontario, Canada. Furthermore, in 2004, 7 stores were opened in the Quebec (including 6 in the Montreal Area). Old Navy has since opened several more stores in Ontario, and the rest of Canada.

Around 2005, Old Navy's then-president Dawn Robertson planned to give Old Navy a more "high fashion feel" to keep up with Hollister Co. and American Eagle Outfitters, whom she saw as competitors. A new logo was introduced and several stores were built or remodeled to reflect the "New Old Navy."[8] One of the newly built stores in St. Petersburg, Florida cost roughly $5 million USD to develop. These stores, from a design stand-point, were boutique in nature, featuring green building materials, rock gardens, large murals and posters, as well as many mirrored and silver accents, unlike the traditional industrial warehouse feel most locations possess. Also, advertisements began to be created in-house, though they lacked the original kitschy and humorous feel, rather having a high fashion and feminine directive.

These stores did not fare well, proving to be a very poor investment, and Robertson was asked to leave the company. During this cycle of change (during 2008) the original logo was reinstated and the company began to refocus on its fun and family oriented attitude it had originally been popular for. The time period in which the change existed is often referred to as "New Navy."

After the failed re-branding trial with Dawn Robertson, OId Navy launched a new re-branding campaign to re-design their stores to be more fun, bright, and family centered. The new store design is known as Project ONE and is rolling out across the fleet of stores. On July 12, 2011 they announced that they just opened their 300th Project ONE store as well as announcing that a third of the North American fleet has been remodeled. The new design targets Old Navy's target customer who is Jennie, Mike, and the Kids and features better lighting, more vibrant colors, layouts that make shopping easier, quick-change stations, and a better, more efficient cash wrap design. 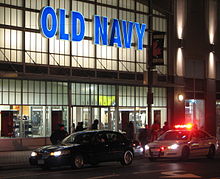 Old Navy's target market largely consists of price conscious though still fashion oriented teens to adults. The clothing is more affordable than its other Gap, Inc., counterparts. Old Navy's stores contain specialized sections for infants, boys, girls, men, and women. Most recently, Old Navy launched a re-worked line of denim for women sizes 0 to 20, men's re-worked denim and released the new line in fall 2008. In addition to clothing, Old Navy also sells a variety of accessories such as shoes, handbags, toys, hats, and sunglasses, along with a line of clothing and toys for dogs.

For many years, Old Navy has attempted to put out a product a year that focuses on attempting to catch on, some more successful than others. The products that stand out are the Tech Vest, Flip Flops, and the Performance Fleece.

Flagship stores also have "collection" business clothes for women, plus size and maternity sections. As of summer 2007 however, plus-size clothing is only available online and has been pulled from all stores. Online sales have proceeded to flourish after being offered exclusively online. Previously, Old Navy attempted to launch a bath and body line, called ONbody (Obsessively Natural),[9] but dropped the effort after only a few months.[citation needed]

Old Navy informally bills itself as an all-American brand, despite producing most of its clothes outside the United States. The chain releases a shirt every summer emblazoned with an American flag. Each year's shirt features a slightly altered flag graphic with the year listed underneath. Alternatively, they also offer shirts with the Puerto Rican flag on them. In its Canadian stores, a similar shirt with the Canadian flag is sold. Likewise they frequently release additional holiday shirts including, but not limited to: Thanksgiving, Halloween, Valentine's Day, Christmas, and for 2009, Groundhog Day.

The most notable aspect of Old Navy's television advertisements is their kitschy, satirical and tone toward a retro time period, vaguely between 1940 and 1967. In sharp contrast to the Gap's advertisements, Old Navy's feature chipper family members sporting their clothing line while engaging in wholesome family activities, such as barbecuing. A common tagline used in their campaigns is " [insert clothing article here] for the whole family!"

Old Navy is also known for its advertising campaigns featuring celebrities such as Molly Sims, Morgan Fairchild, Joan Collins, Fran Drescher, Vanessa Anne Hudgens, Kristin Chenoweth, The Village People, Rupaul, and Lil' Kim, and Lights.[citation needed] Another popular spokesperson was former Vogue editor Carrie Donovan, who often appeared in ads with company "spokesdog," Magic.[citation needed] According to Gap, Inc., Magic, an Airedale terrier mix, was rescued from the streets of San Jose.[citation needed] Magic remains an informal mascot of the company, though Donovan has since died. Many of the Old Navy television commercials featured voiceovers by Bill Wendell of the David Letterman show.[citation needed]

Old Navy started a contest in June 2006 to choose a new mascot dog to replace Magic through a nationwide search contest.[citation needed] Paco, a male from Venice Beach, California (owned by Olivia Wilde and Tao Ruspoli), was announced as the new Old Navy mascot on July 23, 2006.[10]

In 2007, Old Navy's advertising was brought back in-house, and its television campaign began to make the transition from kitsch, to a more modern sensibility, highlighting seasonal product news. With the relaunch of their denim fits in fall, the advertising took on a sexier, more female-centric tone, and began using lesser known musical artists. The sweater spot in September was credited with launching the career of Ingrid Michaelson, an unsigned artist found by Old Navy's marketing creative director, Landis Smithers, on Myspace. Landis Smithers left Old Navy in 2008 as Old Navy began to move its focus away from modern fashion and back to the brand's kitschy, fun, family-o a new episodic television campaign, leveraging long-form stories online, then sixties and thirties on air. The campaign featured the music of Lights, another unsigned artist, and provides story arcs of modern romances that span the entire season. The campaign leveraged Old Navy's new strategy of monthly "fast fashion" news, something that started with its commitment to a faster product pipeline, and a deeper focus on more modern, relevant product in stores.

A recurring song (and artist) used by Old Navy, "World Go 'Round" by Australian rock/pop/dance band Rogue Traders, has been featured in TV spots, promos, and in-store soundtracks. "World Go 'Round," "Watching You," and "Believer," all from the 2005 album Here Come the Drums, were originally used as part of the summer 2007 Summerland campaign, but they have also been included in more recent ads.