The New Orleans Hornets are a professional basketball team based in New Orleans, Louisiana. They play in the Southwest Division of the Western Conference of the National Basketball Association. The franchise began play during the 1988–89 NBA season as the Charlotte Hornets, based in Charlotte, North Carolina, where they were located for fourteen seasons. Following the 2001–02 season, the team relocated to New Orleans, becoming the New Orleans Hornets. After three seasons in New Orleans, Hurricane Katrina forced the franchise to temporarily relocate to Oklahoma City, where they spent two seasons as the New Orleans/Oklahoma City Hornets. The Hornets returned to New Orleans full-time for the 2007–08 season.

In 23 seasons of play, the Hornets have compiled an overall record of 913–941, and have qualified for the post-season twelve times. Their achievements include five playoff series victories and one division title.

With the NBA looking to expand in the late 1980s, George Shinn, an entrepreneur from Kannapolis, North Carolina, wanted to bring an NBA team to the Charlotte area. Shinn's ace in the hole was the Charlotte Coliseum, a state-of-the-art arena under construction in Charlotte that would seat almost 24,000 spectators. After years of work to land the franchise, on April 5, 1987, Shinn was awarded the new expansion team, which was later named "Hornets". The name was derived from the city's fierce resistance to British occupation during the Revolutionary War,[1] which prompted the British commander to refer to it as "a veritable nest of hornets." The team received a lot of attention when they chose teal and purple as their primary colors, setting off a fashion craze in sports in the 1990s, with many other pro and amateur clubs soon following with similar colors. The Hornets also popularized the use of pinstripes on uniforms, inspiring similar designs by various other NBA franchises.

The Hornets first began play during the 1988–89 NBA season, along with the Miami Heat. Despite struggling during their first few years (typical for most expansion clubs), the Hornets led the NBA in attendance in eight of their first ten seasons. The team qualified for their first playoff berth during the 1992–93 season; led by talented players including Larry Johnson, Muggsy Bogues, and then-rookie Alonzo Mourning, they defeated Boston in the first round, with Mourning hitting the series-winning shot in game four. In the Conference Semifinals, however, Charlotte was eliminated by New York in five games. After having mild success over the next three seasons, Glen Rice helped lead the Hornets to back-to-back Playoff appearances during the 1996–97 and 1997–98 seasons, but they were eliminated from the playoffs by New York and Chicago, respectively. Despite continued success on the court and the emergence of other stars such as Baron Davis, the Hornets attendance dropped dramatically during the later seasons in Charlotte, due mostly to personnel moves by team-owner George Shinn. Following the 2001–02 season, in which the team finished last in the league in attendance, the Hornets left Charlotte and relocated to New Orleans, Louisiana.

In their 14 years in Charlotte, the Hornets compiled a 522–546 (.489) win–loss record in the regular season and 20–28 (.417) in the playoffs. The franchise advanced to the post-season seven times, advancing to the Conference Semifinals on four occasions.

The Hornets opened their inaugural season in New Orleans on October 30, 2002, against New Orleans previous NBA franchise, the Utah Jazz. In the first regular season NBA game played in New Orleans in over 17 years,[2] the Hornets defeated the Jazz 100–75, and posthumously retired #7 of "Pistol" Pete Maravich during halftime. The Hornets finished the season with a 47–35 record, but were defeated by Philadelphia in the first round of the playoffs. Following the season, the team unexpectedly fired head coach Paul Silas and replaced him with Tim Floyd. The Hornets began the 2003–04 season strong with a 17–7 start, but sputtered at the end and finished 41–41. They met the Miami Heat in the first round of the 2004 playoffs but were eliminated. After the season, Floyd was fired and the team hired Byron Scott as their new head coach. In a season marred by injury to the team's three all-stars the team finished the year with a franchise-worst record of 18–64, resulting in the franchise's first losing season since the 1991–92 season. In the subsequent draft, the Hornets used their first round pick to select point guard Chris Paul out of Wake Forest University. 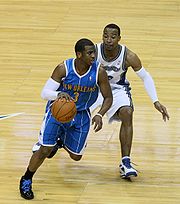 Chris Paul was selected by the Hornets with the 4th pick of the 2005 NBA Draft.

Due to the catastrophic devastation brought by Hurricane Katrina upon the communities of southeastern Louisiana, the Hornets franchise temporarily relocated their base of operations to Oklahoma City in 2005–06 and 2006–07, posting records of 38–44 and 39–44 respectively. During this time, the franchise was known as the New Orleans/Oklahoma City Hornets. In these two seasons, the vast majority of home games were played at the Ford Center in Oklahoma City, while a few remained at New Orleans Arena. The Hornets franchise returned to New Orleans full-time for the 2007–2008 season, with all 41 home games played in the New Orleans Arena. The 2008 NBA All-Star Game and its accompanying festivities were awarded to New Orleans and a serious marketing campaign was commenced in February 2007. Healthier than previous seasons, the Hornets stormed to a 29–12 record at the halfway mark, completing the regular season with a record of 56–26, making the season their most successful ever. The Hornets also won their first-ever division title, winning the Southwest Division. Having clinched the 2nd overall seed for the Western Conference in the 2008 playoffs, the Hornets beat the Dallas Mavericks in the first round but eventually lost to the defending-champion San Antonio Spurs 3 games to 4 in the conference semifinals.

In August 2008, the Hornets unveiled a modified logo and new uniforms with the colors of Creole blue, purple, and Mardi Gras gold, and after six seasons, the pinstripes were reinstated on the uniforms. The Hornets finished the 2008–09 season with a 49–33 record. Paired up with the Denver Nuggets in the first round of the 2009 NBA Playoffs, the Hornets were eliminated in 5 games. The Hornets started the 2009–10 season in a disappointing fashion, and head coach Byron Scott was fired after a 3-6 start to the season. General manager Jeff Bower took over the head coaching duties for the remainder of the season. The Hornets finished the season with a lowly 37–45 record, finishing last in the Southwest division they had won only two seasons before. Jeff Bower later resigned as head coach, and Monty Williams was brought in as new head coach. The team finished the 2010–11 season with a 46–36 record and qualified for the 2011 NBA Playoffs, where they lost to the Lakers 4-2.

In December 2010, the NBA purchased the Hornets from George Shinn and Gary Chouest for an estimated $300 million.[3]

Sixth Man of the Year

Executive of the Year