Complementary colors are pairs of colors that are of “opposite” hue in some color model. The exact hue “complementary” to a given hue depends on the model in question, and perceptually uniform, additive, and subtractive color models, for example, have differing complements for any given color. 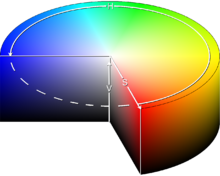 On the HSV color wheel opposite colors are complementary colors, that when mixed produce a shade of grey.

In color theory, two colors are called complementary if, when mixed in the proper proportion, they produce a neutral color (grey, white, or black).

In roughly-perceptual color models, the neutral colors (white, greys, and black) lie along a central axis. For example, in the HSV color space, complementary colors (as defined in HSV) lie opposite each other on any horizontal cross-section.

Thus, in the CIE 1931 color space a color of a particular "dominant" wavelength can be mixed with a particular amount of the "complementary" wavelength to produce a neutral color (grey or white).

In the RGB color model (and derived models such as HSV), primary colors and secondary colors are paired in this way:

When one stares at a single color (red for example) for a sustained period of time (roughly thirty seconds to a minute), then looks at a white surface, an afterimage of the complementary color (in this case green) will appear. This is one of several aftereffects studied in the psychology of visual perception which are generally ascribed to fatigue in specific parts of the visual system.[1]

In the case above the photoreceptors for red light in the retina are fatigued, lessening their ability to send the information to the brain. When white light is viewed, the red portions of light incident upon the eye are not transmitted as efficiently as the other wavelengths (or colors), and the result is the illusion of viewing the complementary color since the image is now biased by loss of the color, in this case red. As the receptors are given time to rest, the illusion vanishes. In the case of looking at white light, red light is still incident upon the eye (as well as blue and green), however since the receptors for other light colors are also being fatigued, the eye will reach an equilibrium. 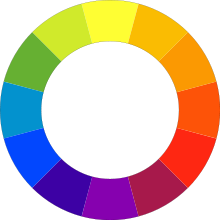 a Blue-Yellow-Red color wheel. Opposite colors are called complementary.

Because of the limitations imposed by the range of colors that were available throughout most of the history of art, many artists still use a traditional set of complementary pairs, including:

The complement of each primary color (red, blue, or yellow) is roughly the color made by mixing the other two in a subtractive system: