The Charlotte Bobcats is a professional basketball team based in Charlotte, North Carolina. They play in the Southeast Division of the Eastern Conference of the National Basketball Association. The Bobcats were established in 2004 as an expansion team, two seasons after Charlotte's previous NBA team, the Charlotte Hornets, relocated to New Orleans and became the New Orleans Hornets.[1] The Bobcats play their home games at Time Warner Cable Arena in center city Charlotte. As of the end of the 2010–11 season, the Bobcats have compiled a record of 222–352. The only time they have qualified for the postseason was in the 2009–10 season.

When the Charlotte Hornets relocated to New Orleans in 2002, the NBA promised Charlotte leaders that the city would be granted an NBA expansion team for the 2004–05 season. Several ownership groups, including one led by former Boston Celtics star Larry Bird, made bids for the team.[2] On December 18, 2002, a group led by Black Entertainment Television founder Robert L. Johnson was awarded the franchise,[3] allowing him to become the first majority African American owner in U.S. professional sports.[4] The rapper Nelly became another notable co-owner.[5]

In June 2003, the new team was named the Bobcats.[6] The bobcat, an expert at survival according to the North Carolina Wildlife Commission, is athletic, fierce and an indigenous predator to the Carolinas.[6][7] Charlotte, already being home to the Carolina Panthers of the National Football League, made the cat-related name a natural choice for the area's new basketball team. There is also speculation as to whether or not the "Bob" in Bobcats is a further reference to Robert "Bob" Johnson, the original owner of the team.

The Bobcats hired Bernie Bickerstaff as the first Head Coach and general manager in franchise history.[8] Despite failed attempts at the ballot box to fully fund a new uptown arena, city politicians decided to implement a hotel and leisure tax in Charlotte to help pay for it.[9][10] George Shinn, owner of the Hornets, also wanted the city to pay for a new arena, and subsequently left town when it failed to do so. 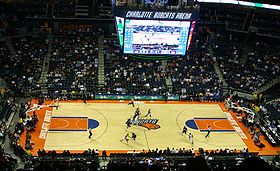 The Bobcats in a game versus the Dallas Mavericks on November 11, 2005

The Bobcats held their expansion draft on June 22, 2004, picking up such seasoned players as Predrag Drobnjak and talented youngsters such as Sacramento Kings forward Gerald Wallace.[11] They also traded with the Los Angeles Clippers to acquire the second pick in the 2004 NBA Draft, which they used to select Emeka Okafor, a center from Connecticut. The Bobcats' first game of the 2004–05 season took place on November 4th at the Charlotte Coliseum, and was a 103–96 loss to the Washington Wizards.[12] Two days later, they won their first game in franchise history over the Orlando Magic, 111–100.[13] On December 14, the Bobcats really gave their fans something to roar about, beating the New Orleans Hornets 94–93 in overtime in the team's first trip to Charlotte after their move to New Orleans.[14] However, like most expansion teams, the Bobcats mostly struggled, finishing their inaugural season with a record of 18 wins and 64 losses and never winning more than two games in a row.[15] Emeka Okafor put on a strong performance, however, and won the 2004–05 NBA Rookie of the Year Award.[16]

In the 2005 NBA Draft, the Bobcats drafted Raymond Felton and Sean May from North Carolina. With them, in addition to Okafor and Wallace, the team hoped to build a young, solid foundation for future success. In their second season, the Bobcats opened the new Charlotte Bobcats Arena with an overtime victory over the Boston Celtics. Despite struggling again for most of the year, they managed to close out the season with four straight wins to finish with a record of 26–56, an eight game improvement over their inaugural season. After the season, the Bobcats announced that NBA legend and North Carolina native Michael Jordan had bought a minority stake in the team, becoming the second-largest shareholder and head of basketball operations.[17]

The Bobcats showed some improvement during the 2006–07 season, posting a 22–33 record late in February. However, the team went cold, suffering through an eight game losing streak and dropping their record to 22–41 by early March. Following the slump, Michael Jordan announced that head coach Bernie Bickerstaff would not return to coach the following season, but would finish coaching the remainder of the current season.[8] The Bobcats sent Bickerstaff out with a bang, winning 11 of their last 19 games to finish their third season with a 33–49 record. In three seasons with the Bobcats, Bickerstaff finished with an overall head coaching record of 77–169.

Front office and coaching were key focuses for the Bobcats during the 2007 offseason. Rod Higgins was hired as general manager, [18] and Sam Vincent was hired as the second head coach in franchise history.[19] Phil Ford was added to the coaching staff over the summer,[20] and another position was filled when Buzz Peterson was hired from Coastal Carolina University to become director of player personnel.[21] In the 2007 NBA Draft, Brandan Wright was selected by the Bobcats with the eighth pick; he was subsequently traded to Golden State in a deal that included Jason Richardson being sent to Charlotte. Unfortunately, the Bobcats were unable to capitalize on offseason moves, finishing the 2007–08 season with a disappointing 32–50 record. The team, which felt confident the season would end with its first playoff berth, struggled amid rumors of players clashing with the coach.[22] Only lasting a year, in which he struggled with personnel decisions, Sam Vincent was fired on April 26, 2008.[23] 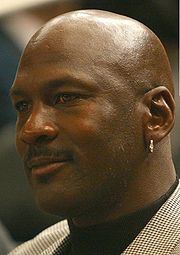 Michael Jordan acquired the Bobcats in 2010.

On April 29, 2008 the Bobcats reached an agreement to hire Basketball Hall of Famer Larry Brown as the third head coach in franchise history.[24] With the ninth selection of the 2008 NBA Draft, the Bobcats selected D. J. Augustin from Texas. The team came very close to reaching the franchise's first playoff berth during the 2008–09 season, but finished just four games out of eighth place with a team record 35 wins, 47 losses. Members of the team voiced their frustration at management for hosting the Charlotte Jumper Classic, a horse event, at the end of the season.[25] The scheduling conflict forced the Bobcats to play their final four games on the road, virtually ending any playoff hopes. Following the season, Robert Johnson announced he was putting the team up for sale.

Gerald Henderson from Duke was chosen with the 12th pick by the Bobcats in the 2009 NBA Draft. The Bobcats traded Emeka Okafor for New Orleans Hornets center Tyson Chandler, and through more trades acquired Stephen Jackson and Acie Law from the Golden State Warriors. On February 27, 2010, it was announced that Robert Johnson had decided to sell the team to Michael Jordan, allowing Jordan to become the first former NBA player to become majority owner of a franchise.[26][27] The Bobcats played their best basketball yet, finishing the 2009–10 season with an overall record of 44–38, the team's first-ever winning record and good enough for the first playoff berth in franchise history. Additionally, Gerald Wallace became the first player from the Bobcats to become an NBA All-Star. However, in the first round of the playoffs, the Bobcats were swept by the Orlando Magic, quickly ending their season.

The Bobcats began the 2010–11 season with high hopes following their success the previous season. In a victory over the Phoenix Suns, Stephen Jackson recorded the first triple-double in franchise history. However, the Bobcats struggled early during the season, and on December 22, 2010, following a dismal 9–19 start, Michael Jordan announced that Larry Brown had stepped down as the Bobcats Head Coach; that same day, veteran coach Paul Silas was hired as their new Head Coach. On February 24, 2011, the day of the NBA trade deadline, the Bobcats made some moves to clear up some cap space as they prepare for the much anticipated elite free agent class of 2012.[citation needed] The Bobcats sent former all-star forward Gerald Wallace to the Portland Trail Blazers for two first round draft picks, Joel Przybilla, Sean Marks, and Dante Cunningham. They also sent veteran center Nazr Mohammed to the Oklahoma City Thunder for DJ White and Mo Peterson. Going down the stretch, injuries killed any chances of Charlotte trying to catch the Indiana Pacers for the eighth spot in the east; the key injuries included Stephen Jackson and Tyrus Thomas. In the end, the Bobcats finished the season with a 34–48, finishing 25–29 under Paul Silas.

Until 2009, home jerseys have been white, reading "Bobcats" in orange with blue and black trimming. The primary away jersey was orange reading "Charlotte" in white with blue and black trimming.[28] In the 2006 offseason, the Bobcats announced a new alternate away jersey which debuted during the 2006–07 season. The alternate jersey is blue and read reads "Bobcats" in white with black, orange and white trimming.[29] Racing Day blue alternates are used to honor Charlotte's NASCAR fanbase.

For the 2009–10 season, the Bobcats redesigned their uniforms, which have a mixture of characteristics from the old Charlotte Hornets and the Bobcats uniforms. The home uniforms are white and features an arched "Bobcats" in blue with orange and white trim. Road uniforms are blue and features the arched "Charlotte" in white with blue and orange trim. Both designs feature silver pinstripes, similar to what the Hornets have worn for most of their existence. The NASCAR alternates were also updated to include the pinstripes.

During their first season, the Bobcats played their home games at the Charlotte Coliseum, while their new arena (the Charlotte Bobcats Arena) was being built. After its completion, the city closed the old Coliseum in the 2005 offseason and opened the new arena with a Rolling Stones concert.

For the Bobcats' first season, Johnson partnered with Time Warner to create Carolinas Sports Entertainment Television (C-SET), a regional sports network. It aired 60 Bobcats games that also aired on Comporium Cable in the South Carolina portion of the Charlotte market. However, Time Warner placed C-SET on its digital package as an incentive to try to get customers to switch to its digital service, leaving analog customers in the dark. It also refused to allow DirecTV or Dish Network to pick up the network on their local feeds. As a result, most of the western Carolinas and those without digital cable were left to rely on radio coverage.

C-SET folded on the day of the 2005 NBA Draft, and most games then moved to News 14 Carolina, a cable news channel available on Time Warner Cable's systems in Charlotte, the Triad and the Triangle. However, this left viewers in most of South Carolina (except for the South Carolina side of the Charlotte area, which saw games on Comporium) as well as eastern and western North Carolina, out in the cold. News 14 was also not available on satellite.

As part of the Time Warner Cable Arena deal, the Bobcats signed over broadcasting rights to Fox Sports South. Starting with the last five games of the 2007-08 season, about 70 games per season have been shown on Fox Sports Carolinas (Fox Sports South's new regional feed) and sister network SportSouth in North and South Carolina. The deal is believed to be the first simultaneous naming rights/broadcast rights deal in the history of North American professional sports.[31]

Select games also air on a network of over-the-air stations across North Carolina, South Carolina and Virginia, fronted by WMYT-TV in Charlotte.

The flagship station for radio coverage is WFNZ, Charlotte's all-sports radio station. Before 2009-10, games had aired on WOLS. WOLS switched its non-sports programming from Oldies to Spanish language on January 1, 2009, making Bobcats and Duke basketball the station's only non-Spanish language programming.