The colour orange occurs between red and yellow in the visible spectrum at a wavelength of about 585–620 nm, and has a hue of 30° in HSV colour space. It is numerically halfway between red and yellow in a gamma-compressed RGB colour space, the expression of which is the RGB colour wheel. The complementary colour of orange is blue. Orange pigments are largely in the ochre or cadmium families, and absorb mostly blue light.

The colour orange is named after the orange fruit, after the appearance of the ripe fruit.[3] Before this word was introduced to the English-speaking world, the colour was referred to as ġeolurēad (yellow-red).

The first recorded use of orange as a colour name in English was in 1512,[4][5] in a will now filed with the Public Records Office.

Web colour orange, defined as FFA500, is the only named colour defined in CSS that is not also defined in HTML 4.01.

The web colour called dark orange is displayed at right.

Displayed to the left is the actual colour of the outer skin of a typical orange. This colour is called orange peel. It is the same colour as the fruit for which it was named.

A discussion of the difference between the colour orange (the colour halfway between red and yellow, i.e. colour wheel orange, RGB #FF7F00, shown at the top of this article) and the colour orange peel (the actual colour of the outer skin of an orange), may be found in Maerz and Paul.[6]

The first recorded use of orange peel as a colour name in English was in 1839.[7]

Burnt orange has been in use as a colour name for this deep shade of orange since 1915.[8]

This colour is one variation that is used as a school colour of the University of Texas at Austin, Westwood High School (Austin, Texas), Clemson University, Virginia Tech, Auburn University, and Mesa Verde High School (Citrus Heights, California).

This variation of orange is one of the primary colours for the American Football team the Cleveland Browns. Burnt orange was popular in interior design during the 1970s, and is often associated with this period. Red headed peoples usually have hair that is more accurately a burnt orange colour.

Brown is actually derived from the orange part (orange + grey) of the colour spectrum. It can be described as an especially dark orange.

The first recorded use of brown as a colour name in English was in about 1000 in the Metres of Boethius.[9][10]

Orange can also be associated with colleges. Among notable colleges with orange as a colour include:

Orange is a team colour for a number of professional sports teams. 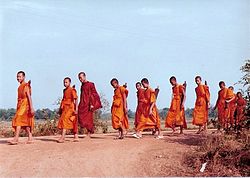