The 11 July 2006 Mumbai train bombings were a series of seven bomb blasts that took place over a period of 11 minutes on the Suburban Railway in Mumbai, the capital of Indian state of Maharashtra and the nation's financial capital. The bombs were set off in pressure cookers on trains plying the Western line of the Suburban Railway network. 209 people were killed and over 700 were injured. According to Mumbai Police, the bombings were carried out by Lashkar-e-Toiba and Students Islamic Movement of India (SIMI).[1] 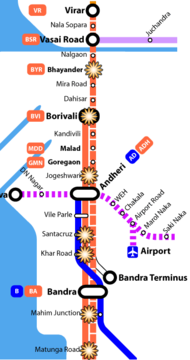 Pressure cookers with a 2.5 kg mixture of RDX and ammonium nitrate in each,[2] were placed on trains on the western line of the suburban ("local") train network, which forms the backbone of the city's transport network. Pressure cookers were used in this bombing and other recent explosions[3][4][5] to increase the afterburn in a thermobaric reaction, more powerful than conventional high explosives.[6] The first blast reportedly took place at 18:24 IST (12:54 UTC), and the explosions continued for approximately eleven minutes, until 18:35,[7] during the after-work rush hour. All the bombs had been placed in the first-class "general" compartments (some compartments are reserved for women, called "ladies" compartments) of several trains running from Churchgate, the city-centre end of the western railway line, to the western suburbs of the city. They exploded at or in the near vicinity of the suburban railway stations of Matunga Road, Mahim, Bandra, Khar Road, Jogeshwari, Bhayandar and Borivali.[8][9] Home Minister Shivraj Patil told reporters that authorities had "some" information an attack was coming, "but place and time was not known".[10]

The bomb attacks in Mumbai came hours after a series of grenade attacks in Srinagar, the largest city in the Indian state of Jammu and Kashmir. Home Secretary V K Duggal said there was no link between the Srinagar and Mumbai bomb blasts.[11]

Maharashtra Deputy Chief Minister R. R. Patil confirmed that a total of 200 people were killed and another 714 others have been injured.[12] Additionally, various news organisations have reported that at least 200 people have died and that more than 700 others have been injured.[13][14][15][16][17] A week after the blasts in Mumbai the confirmed death toll rose to 207.[18] In September 2006 it was confirmed that the death toll had risen to 209.[19]

A state of high alert was declared in India's major cities. Both the airports in Mumbai were placed on high alert. The western line of the Mumbai Suburban Railway network was at first shut down, although some trains resumed service later, and stringent security arrangements, including frisking and searching of commuters, were instituted on the other lines of the network. The city's bus service, the BEST, pressed extra buses into service to transport stranded commuters home.[20]

Resumption of services and return to normality

Western Railway services were restored on 11 July by 10.45 pm.[22] As a show of investor confidence, the Mumbai Stock Exchange rebounded, starting the day with the BSE Sensex Index up by nearly 1% in morning trade. Foreign investors also retained confidence, with the Sensex up almost 3% at 10,930.09 at the end of the day's trade. 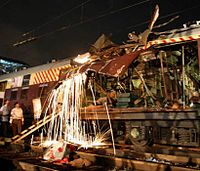 However a study commissioned by former MP Kirit Somaiya noted that that only 174 of the 1,077 victims had received compensation through the Railway Claims Tribunal. For the handicapped victims, only 15 out of 235 eligible cases had been taken care of. Regarding the Prime Minister's promise to India concerning the rehabilitation of the victims, L. K. Advani noted:

Due to the mobile phone networks being jammed, news channels such as NDTV ran tickertapes with information of injured individuals as well as SMS messages from those who wish to contact their families.[25] Reports indicated that at around 18:00 UTC on 11 July (midnight in Mumbai), the phone networks were restoring service; telephone service was completely restored during the night.

Mumbai Help, a blog run by around thirty bloggers, was a useful source of information, especially for those outside India.[citation needed]

Some 350 people were detained 36 hours after the incident in Maharashtra — police claim that these are people rounded up for investigations.[26] On 14 July, Lashkar-e-Qahhar, a terrorist organisation possibly linked to Lashkar-e-Taiba (LeT), claimed responsibility for the bombings. In an e-mail to an Indian TV channel, the outfit says it organised the bombings using 16 people who are all "safe". According to the e-mail, the main motive seems to have been a retaliation to the situation in the Gujarat and Kashmir regions, possibly referring to the alleged oppression of Muslim minorities in certain parts of the region. It also says that the blasts were part of a series of attacks aimed at other sites such as the Mumbai international airport, Gateway of India, the Taj Mahal in Agra and the Red Fort in New Delhi. The authorities are investigating this claim and are trying to track the location of the e-mail sender.[27] However, on 17 July, the forensic science laboratory Mumbai has confirmed the use of a mixture of the highly explosive RDX and Ammonium Nitrate for the bombings. The presence of these explosives in the post explosive debris was confirmed by modern techniques such as Liquid Chromatography with mass detector (LCMS), Gas Chromatography with mass detector (GCMS) and Ion Scan Chromatography. They have indicated a strong possibility of all explosives being planted at the Churchgate railway station, which was the starting point for all affected trains.[28]

Initially, religious extremists from the Lashkar-e-Toiba and the banned Students Islamic Movement of India terrorist groups, and Pakistan's intelligence agency ISI were the prime suspects.[29][30] Both Lashkar and SIMI denied responsibility for the bombings.[31][32] There was also evidence about the involvement of the international Islamic terrorist group Al-Qaeda following a phone call from a man claiming to be a spokesperson for the group on 13 July. The alleged al-Qaeda spokesman had said the blasts were a "consequence of Indian oppression and suppression of minorities, particularly Muslims."[33]

On 21 July 2006 police arrested three people suspected to be involved in the bombings.[34] Police have detained more than 300 suspects since 18 July but these are the first arrests in the case.[35] Two of the men were detained on Thursday in the northern state of Bihar and the third later in Mumbai.[36][37] All three are said to belong to the banned SIMI organisation. On the same day, Abdul Karim Tunda was arrested in Kenya on suspicions of involvement in the train bombings.[38] He is one of India's most wanted men and also a suspected organizer for the banned Islamic militant group Lashkar-e-Toiba.[39]

In late 2006, all the seven key accused in the Mumbai train blasts in July retracted their alleged confession to the police, saying they were illegally forced to sign blank papers, an Indian TV channel reported.[40]

Muslim reaction to the arrests

Following the blasts, almost immediately, police arrested hundreds of Muslims for the investigation purposes. Muslims alleged they were the victims of police witch-hunts. Although the police denied singling out any group, the critics retorted that police had been mostly raiding the Muslim dominated-pockets in India.

The imam of India’s largest mosque — the Jama Masjid in New Delhi — Syed Ahmed Bukhari said, “Of course this is a deliberate targeting of Muslims”. Another Muslim leader Anees Durrani echoed Imam Bukhari’s views. He said, “very biased against Muslims”. He further added, “You can see that very plainly by the way the investigations are proceeding. Leaders of Indian Muslims have condemned the Mumbai blasts and others before 11 July. No one knows who carried out the blasts but the needle of suspicion is always pointed towards us”.[41]

M K Narayanan, the Indian National Security Advisor, has said that India doesn't have "clinching" evidence of the involvement of ISI in the Mumbai train blasts of 11 July.

"I would hesitate to say we have clinching evidence but we have pretty good evidence," he was quoted as saying on CNN-IBN.

On 25 September 2008, Hindustan Times reported that "the Crime branch also learnt that the men [behind 2008 Delhi bombings] are those very operatives who had introduced themselves as Pakistanis to perpetrators of 11 July 2006 Mumbai train bombings .[42] Since the suspects linked with 2008 Delhi bombings are all Indian, this leaves earlier claims of ISI involvement as premature and incorrect.

On 27 February 2009, Sadiq Sheikh, an arrested leader of the Indian Mujahideen confessed to his alleged role in the bombings in a news channel broadcast .[43] He claimed to have engineered the pressure cooker bombs with his associates in a flat in central Mumbai. If verified, these allegations could invalidate the previous claims by the ATS that the ISI or the SIMI were involved. Sadiq states in his confession, ‘‘All five of us arranged local first class train passes beforehand. We also had the local train time table with us so that we could choose a train as per our convenience. We purchased bags and pressure cookers in Bombay.’’ He also claimed to have misled investigators by blaming the attacks on the Al-Qaeda. 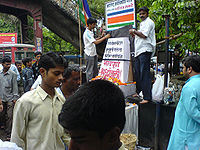 In wake of the blasts, the Indian government tightened security in railway stations. Under new restrictions passed by the Ministry of Railways, non-passengers would no longer be allowed on the railway platforms after July 2006. Other major security steps include installation of close circuit televisions inside the stations for round-the-clock vigil and installation of metal detectors.[44]

Various senior political figures from India and around the world condemned the attacks. In India, Prime Minister Dr. Manmohan Singh was quick to call for calm in Mumbai, while President Dr. A. P. J. Abdul Kalam, Railways Minister Lalu Prasad Yadav, and president of the Indian National Congress Sonia Gandhi also issued statements regarding the bombings in Mumbai. Officials from other nations offered their condolences to those affected by the bombings. Officials, from Pakistan which has long feuded with India, and the United Kingdom, which was the target of similar attacks the previous July, were among those who denounced the attacks in Mumbai as well as terrorism as a whole. Several terrorist groups, including Lashkar-e-Toiba and al-Qaeda, made comments — both in condemnation and condonation — about the attacks as well.

A memorial service was held in Mumbai on 18 July at 6:25 pm local time — exactly one week after the blasts. President Abdul Kalam, his hand raised to his forehead in salute, led the two-minute silence as people lit candles and placed wreaths at Mahim station, one of the seven places on the suburban rail network hit by bombs. Sirens sounded across Mumbai marking the memorial service. People gathered at the site of the blasts, in railway stations on the city's Western Line and millions of people stopped talking, traffic came to a halt and cinemas interrupted films as a city that never stops observed a silence for bombing victims.[citation needed]

Setback for the India-Pakistan peace process

Following the bomb attacks, Minister of State of External Affairs E. Ahamed announced on 14 July that India would suspend the talks with Pakistan until President Pervez Musharraf abides by his 2004 promise of ending all support to cross-border terrorism.[45] However, Prime Minister Manmohan Singh has conveyed India's willingness to be flexible with Pakistan following Pakistani President Pervez Musharraf's statements that ending the three-year long peace process would signal a victory for the separatist terrorists.[46]

On 16 September at the summit of the Non-Aligned Movement in Havana Cuba, Prime Minister Manmohan Singh and President Pervez Musharraf made a joint statement announcing that the two countries would resume formal peace negotiations and set up a joint agency to tackle terrorism.[47]

Hindi film Mumbai Meri Jaan (2009), which won multiple Filmfare Awards, deals with the aftermath of the Mumbai train bombings[48], while the incidents that followed the bombings, were used as details in the plot of film, A Wednesday! (2008) starring Naseeruddin Shah, which was also inspired by the train bombings.[49]