The Chhatrapati Shivaji Terminus (Marathi: छत्रपती शिवाजी टर्मिनस), (formerly Victoria Terminus) is a UNESCO World Heritage Site and historic railway station in Mumbai which serves as the headquarters of the Central Railways. Situated in the Bori Bunder area of Mumbai, it was built as a new railway station on the location of the Bori Bunder Station[1] in 1887 to commemorate the Golden Jubilee of Queen Victoria. In 1996 its name was changed to the present name in honour of the Maratha warrior Shivaji. Its abbreviations CST or VT are popularly used by locals to refer to the station and it is also known by its abbreviation CSTM or Bombay VT. It is the busiest railway station in India,[2] and serves both as a terminal for long distance trains terminating in Mumbai as well as the Mumbai Suburban Railway.

The site on which this station is situated, Bori Bunder, is of great historical importance and is associated with the origins of Mumbai as a city. The city derives its name from the goddess Mumba Devi, and the earliest temple dedicated to her is believed to have stood at the site of the Victoria Terminus. The original shrine was demolished in 1317 by Mubarak Shah and reconstructed. This was demolished by the Portuguese in 1760.

The station was designed by the consulting British architect Frederick William Stevens(1848-1900). Work began in 1878. He received

1,614,000 (US$32,731.92) as payment for his services.[3] Stevens earned the commission to construct the station after a masterpiece watercolour sketch by draughtsman Axel Haig.[3] The final design bears some resemblance to the St Pancras railway station in London.[3][4] GG Scott's plans for Berlin's parliament building had been published four years before, and also has marked similarities to the station's design.[5]

It took ten years to complete[4] and was named "Victoria Terminus" in honour of the Queen and Empress Victoria; it was opened on the date of her Golden Jubilee in 1887.[4][6] It cost £260,000 when it was finished in 1888, the highest for any building of that era in Bombay.[7] This famous architectural landmark in Gothic style was built as the headquarters of the Great Indian Peninsular Railway. Since then, the station came to be known as Bombay VT.

Originally intended only to house the main station and the administrative offices of the Great Indian Peninsula Railway, a number of ancillary buildings have been added subsequently, all designed so as to harmonise with the main structure. A new station to handle main line traffic was erected in 1929. The original building is still in use to handle suburban traffic and is used by over three million commuters daily. It is also the administrative headquarters of the Central Railway.

On 26 November 2008, two terrorists entered the passenger hall of the CST, opened fire and threw grenades at people. The terrorists were armed with AK-47 rifles.

Kasab in the Chhatrapati Shivaji Terminus during the 2008 Mumbai attacks.

One of the terrorists, Ajmal Kasab, was later caught alive by the police and identified by eyewitnesses. The attacks began around 21:30 when the two men entered the passenger hall and opened fire,[10][11] The attackers killed 58 people and injured 104 others,[11], including a police officer, Tukaram Omble; their assault ending at about 22:45.[10]. The CCTV captured the attack, and the evidence was used to identify and indict Kasab. 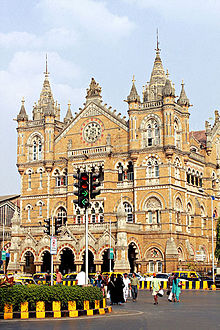 The station building was designed in the High Victorian Gothic style of architecture. The building exhibits a fusion of influences from Victorian Italianate Gothic Revival architecture and traditional Indian architecture. The skyline, turrets, pointed arches, and eccentric ground plan are close to traditional Indian palace architecture. Externally, the wood carving, tiles, ornamental iron and brass railings, grills for the ticket offices, the balustrades for the grand staircases and other ornaments were the work of students at the Sir Jamsetjee Jeejebhoy School of Art. The station stands as an example of 19th century railway architectural marvels for its advanced structural and technical solutions.

The VT was constructed using high level of engineering both in terms of railway engineering and civil engineering. It is one of the first and is considered as one of the finest products of the use of industrial revolution technology merged with revival of the Gothic Revival style In India . The centrally domed office structure has a 330 feet long platform connected to a 1,200 feet long train shed, and its outline provides the skeleton plan for building. VT's dome of dovetailed ribs, built without centering, was considered as a novel achievement of the era. The interior of the building was conceived as a series of large rooms with high ceilings. It is a utilitarian building and has had various changes required by the users, not always sympathetic. It has a C-shaped plan which is symmetrical on an east-west axis. All the sides of the building are given equal value in the design. It is crowned by a high central dome, which acts as the focal point. The dome is an octagonal ribbed structure with a colossal female figure symbolizing Progress, holding a torch pointing upwards in her right hand and a spoked wheel in her left hand. The side wings enclose the courtyard, which opens on to the street. The wings are anchored by monumental turrets at each of their four corners, which balance and frame the central dome. The façades present the appearance of well proportioned rows of windows and arches. The ornamentation in the form of statuary, bas-reliefs, and friezes is exuberant yet well controlled. The columns of the entrance gates are crowned by figures of a lion (representing Great Britain) and a tiger (representing India). The main structure is built from a blend of India sandstone and limestone, while high-quality Italian marble was used for the key decorative elements. The main interiors are also decorated: the ground floor of the North Wing, known as the Star Chamber, which is still used as the booking office, is embellished with Italian marble and polished Indian blue stone. The stone arches are covered with carved foliage and grotesques.[12]

Internally, the ceiling of the booking hall was originally painted blue, gold and strong red on a ground of rich blue with gold stars. Its walls were lined with glazed tiles made by Maw & Co of Britain.[13] Outside, there are statues representing Commerce, Agriculture, Engineering and Science, with a statue representing Progress on the central dome of the station.[13] A statue of Queen Victoria beneath the central dome has been removed.[13]

Rumours persist that the design for Chhatrapati Shivaji Terminus in Mumbai, India was originally designated for Flinders Street Station. However, no convincing evidence, other than architectural similarities to other buildings in their respective cities, has been produced to support the rumour.

Plans are underway to upgrade Mumbai CST (along with Pune Jn. and Nagpur Jn.) by means of a public-private partnership.

The network of suburban trains (locally known as locals, short for local trains) radiating out from this station is instrumental in keeping Mumbai running. The station serves long-distance trains as well as two of the suburban lines-the Central Line and the Harbour line. It is the westernmost terminus of Central Railway. On the Central Line the trains terminate at Kurla, Ghatkopar, Thane, Dombivli, Kalyan, Ambarnath, Badlapur, Karjat, Khopoli, Asangaon, Titwala, and Kasara. While on the Harbour Line, the trains terminate at Bandra, Andheri, Mankhurd, Vashi, Belapur and Panvel.

The station has been the location of filming the Jai Ho song in Slumdog Millionaire[14]; a future James Bond film [15]; Ra.One[16] etc.