The Red Fort (Hindi: लाल क़िला, Urdu: لال قلعہ, usually transcribed into English as Lal Qil'ah or Lal Qila) is a 17th century fort complex constructed by the Mughal emperor Shah Jahan in the walled city of Old Delhi (in present day Delhi, India) that served as the residence of the Mughal Emperors. It also served as the capital of the Mughals until 1857, when Mughal emperor Bahadur Shah Zafar was exiled by the British Indian government. It was designated a UNESCO World Heritage Site in 2007.[1]

Mughal Emperor Shah Jahan, started construction of the massive fort in 1638 and work was completed in 1648 (10 years).[2] The Red Fort was originally referred to as "Qila-i-Mubarak" (the blessed fort), because it was the residence of the royal family. The layout of the Red Fort was organised to retain and integrate this site with the Salimgarh Fort. The fortress palace was an important focal point of the medieval city of Shahjahanabad. The planning and aesthetics of the Red Fort represent the zenith of Mughal creativity which prevailed during the reign of Emperor Shah Jahan. This Fort has had many developments added on after its construction by Emperor Shahjahan. The significant phases of development were under Aurangzeb and later Mughal rulers. Important physical changes were carried out in the overall settings of the site after the Indian Mutiny in 1857. After Independence, the site experienced a few changes in terms of addition/alteration to the structures. During the British period the Fort was mainly used as a cantonment and even after Independence, a significant part of the Fort remained under the control of the Indian Army until the year 2003. The Red Fort is an attraction for tourists from around the world.

The Red Fort was the palace for Mughal Emperor Shah Jahan's new capital, Shahjahanabad (present day Old Delhi), the seventh city in the Delhi site. He moved his capital here from Agra in a move designed to bring prestige to his reign, and to provide ample opportunity to apply his ambitious building schemes and interests.

The fort lies along the Yamuna River, which fed the moats that surround most of the wall. The wall at its north-eastern corner is adjacent to an older fort, the Salimgarh Fort, a defence built by Islam Shah Suri in 1546.The construction of the Red Fort began in 1638 and was completed by 1648. 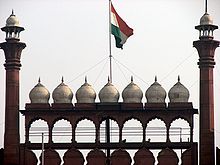 A treaty signed in 1752 made Marathas the protector of the Mughal throne at Delhi.[3] In 1761, after the Marathas lost the third battle of Panipat, Delhi was raided by Ahmed Shah Abdali. In 1803, the forces of British East India Company overran the Maratha forces near Delhi and ended the Mughal rule over the city.[4]

The last Mughal emperor to occupy the fort was Bahadur Shah II "Zafar". Despite being the seat of Mughal power and its defensive capabilities, the Red Fort was not defended during the 1857 uprising against the British. After the failure of the 1857 rebellion, Zafar left the fort on 17 September. He returned to Red Fort as a prisoner of the British. Zafar was tried on in a trial starting on 27 January 1858, and was exiled on 7 October.

View of the pavilions in the courtyard

Red Fort showcases the very high level of art form and ornamental work. The art work in the Fort is a synthesis of Persian, European and Indian art which resulted in the development of unique Shahjahani style which is very rich in form, expression and colour. Red Fort, Delhi is one of the important building complexes of India which encapsulates a long period of Indian history and its arts. Its significance has transcended time and space. It is relevant as a symbol of architectural brilliance and power. Even before its notification as a monument of national importance in the year 1913, efforts were made to preserve and conserve the Red Fort, for posterity.

The walls of the fort are smoothly dressed, articulated by heavy string-courses along the upper section. They open at two major gates, the Delhi and the Lahore gates. The Lahore Gate is the main entrance; it leads to a long covered bazaar street, the Chandni Chowk, whose walls are lined with stalls for shops. The Chandni Chowk leads to a large open space where it crosses the large north-south street that was originally the division between the fort's military functions, to its west, and the palaces, to its east. The southern end of this street is the Delhi Gate.

Important buildings and other structures inside the fort of red fort

Some of the most important sections of red fort are:-

Beyond this gate is another, larger open space, which originally served as the courtyard of the Diwan-i-Aam, the large pavilion for public imperial audiences with an ornate throne-balcony (jharokha) for the emperor. The columns were painted in gold and there was a gold and silver railing separating the throne from the public. 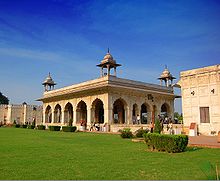 The Diwan-i-Khas is a pavilion clad completely in marble, the pillars are decorated with floral carvings and inlay work with many semi-precious stones. It was made only for public meetings. To read about,they may convey an idea of atrocious bad taste; but I can only say that when you have overcome the first repellent feeling which ensues when you realize that the buildings are not all real, you are constrained to admit that imitations are amazingly clever. And after the aesthetic sense has been lulled, you pass with small reluctance to a state of approval,for you recognize that not one stone of the original structures has been injured,and that when the Durbar is a thing of the past, they will rapidly regain their original form. Perhaps it is not necessary to indicate in detail the changes that have been made. Hot-water pipes and the electric light,however agreeable and illuminating, are best forgotten Shahjahan's abode of bliss

The imperial private apartments lie behind the throne. The apartments consist of a row of pavilions that sits on a raised platform along the eastern edge of the fort, looking out onto the river Yamuna. The pavilions are connected by a continuous water channel, known as the Nahr-i-Behisht, or the "Stream of Paradise", that runs through the centre of each pavilion. The water is drawn from the river Yamuna, from a tower, the Shah Burj, at the north-eastern corner of the fort. The palace is designed as an imitation of paradise as it is described in the Koran; a couplet repeatedly inscribed in the palace reads, "If there be a paradise on earth, it is here, it is here". The planning of the palace is based on Islamic prototypes, but each pavilion reveals in its architectural elements the Hindu influences typical of Mughal building. The palace complex of the Red Fort is counted among the best examples of the Mughal style.

The two southernmost pavilions of the palace are zenanas, or women's quarters: the Mumtaz Mahal (now a museum), and the larger, lavish Rang Mahal, which has been famous for its gilded, decorated ceiling and marble pool, fed by the Nahr-i-Behisht.

To the west of the hammam is the Moti Masjid, the Pearl Mosque. This was a later addition, built in 1659 as a private mosque for Aurangzeb, Shah Jahan's successor. It is a small, three-domed mosque carved in white marble, with a three-arched screen which steps down to the courtyard.

To its north lies a large formal garden, the Hayat Bakhsh Bagh, or "Life-Bestowing Garden", which is cut through by two bisecting channels of water. A pavilion stands at either end of the north-south channel, and a third, built in 1842 by the last emperor, Bahadur Shah Zafar, stands at the centre of the pool where the two channels meet. 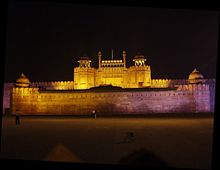 The Red Fort by night.

The Red Fort is one of the most popular tourist destinations in Old Delhi, attracting thousands of visitors every year. The fort is also the site from which the Prime Minister of India addresses the nation on 15 August, the day India achieved independence from the British. It also happens to be the largest monument in Old Delhi.

At one point in time, more than 3,000 people lived within the premises of the Delhi Fort complex. But after the Sepoy Mutiny of 1857, the fort was captured by Britain and the residential palaces destroyed. It was made the headquarters of the British Indian Army. Immediately after the mutiny, Bahadur Shah Zafar was tried at the Red Fort. It was also here in November 1945, that the most famous courts-martial of three officers of the Indian National Army were held. Even after India gained independence in 1947, the Indian Army continued its control over the fort. In December 2003, the Indian Army handed the fort over to the Indian tourist authorities.

Today, a sound and light show describing Mughal history is a tourist attraction in the evenings. The general condition of the major architectural features is mixed. None of the water features, which are extensive, contain water. Some of the buildings are in fairly good condition and have their decorative elements undisturbed. In others, the marble inlay flowers have been removed by looters and vandals. The tea house, though not in its historical state, is a functioning restaurant. The mosque and hamam are closed to the public, though one can catch peeks through the glass windows or marble lattice work. Walkways are left mostly in a crumbling state. Public toilets are available at the entrance and inside the park, but some are quite unsanitary.

The entrance through the Lahore Gate leads to a retail mall with jewellery and crafts stores. There is a museum of "blood paintings" depicting young Indian martyrs of the 20th century along with the story of their martyrdom. There is also an archaeological museum and an Indian war memorial museum.

The fort was the site of a December 2000 attack by terrorist group Lashkar-e-Toiba which killed two soldiers and one civilian in what was described in the media as an attempt to derail the India-Pakistan peace process in Kashmir.