The Climate of Mumbai is a tropical wet and dry climate. Mumbai's climate can be best described as moderate temperatures with high level of humidity. Its coastal nature and tropical location ensures moderate temperatures throughout the year, average of 27.2 °C and average precipitation of 242.2 cm (95.35 inches).[1] The temperatures in average about 30 °C in summer and 18 °C in winter. Mumbai's experiences 4 distinct seasons Winter: (December–Feb); Summer: (March–May); Monsoon (June–Sep) and Post Monsoon (Oct–Dec).

Monthly break up of climate

The following is the monthly breakup of the weather in Mumbai city.

January is the coolest month of the year for Mumbai with mean daily minimum being 16.4 °C and mean daily maximum being 30.6 °C.[2][3] The weather is generally mild and pleasant with daytime highs of around 27 °C and night-time lows of around 17 °C. The nightly lows may vary between 10 °C and 20 °C. Chilly northern winds during the day make the city seem cooler than it really is. Generally clear skies, with some smog – especially in the early morning – are the norm. The days are dry, the nights relatively humid. January is also associated with the deciduous trees in the city shedding their leaves. 26–27 January 2008 recorded a minimum temperature of 10.2 °C, which is the lowest recorded in 45 years.

The fine January weather continues for the first fortnight of February. The mean daily minimum stays at 17.3 °C and mean daily maximum being 31.3 °C.[2] The day highs average 29 to 30 °C. The nights hover around 17 °C. By the second fortnight the humidity starts to increase and the day temperature might rise up to 32 °C. Smog increases. 6 February 2008 recorded a minimum temperature of 9.4 °C. Just two days later, on 8 February, the minimum temperature recorded was 7.8 °C, which was the lowest temperature Mumbai has seen since 1962.[4] This was the coldest day in February ever.

The month of March sees a mean minimum temp of 20.6 °C and mean maximum temp of 32.7 °C.[2] The beginning of March sees night temperatures reach 15 °C. The days reach 30 to 33 °C. During the transition from the dry to humid weather in mid March, the temperature might hit 38 to 40 °C. This high however, is due to hot dry winds from Gujarat. By mid March the temperatures hit 37 °C, with the lows at 18 °C. Humidity is unbearable, and smog affects the city. New leaves sprout from deciduous trees.

The temperatures and humidity are still high. However, the cooling effect of the sea breezes makes its presence felt. The cool winds compensate for the heat. Which means the days highest temperature stays around 33.1 °C and means daily lows are around 23.7 °C.[2] Plants are in full bloom in April.

May is the hottest month of the year for Mumbai with the cool sea breezes providing some relief. This means daily maximum hovers around 33.3 °C and also means that the daily low is 26.1 °C.[2]

June marks the beginning of the monsoon period in Mumbai. The beginning of the month is characterized by a continuation of the summer with increased humidity. The official date for the monsoon to hit the city is 10 June. This period is marked by thunderstorms and often windy conditions as the monsoon establishes itself over the city. Rainfall activity intensifies as the month goes on, leading into wettest month, July. The max and min mean daily temperatures are measured at 31.9 °C/25.8 °C.[2] 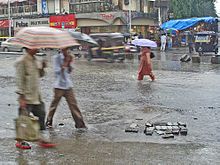 Waterlogging due to showers

In this month the city receives the maximum amount of rain. July and August are characterised by almost non stop rain and weeks of no sunshine. A continuous monsoon current covers the entire western coast of India during this period. Rainfall activity is less stormy and more constant with a relatively constant breeze from the West or South West. It is not uncommon for parts of the city to be waterlogged during periods of persistent heavy rain. This affects the city's public transport system often leading to long delays. During periods of severe precipitation, the city's commuter rail system is often suspended because of water logging and poor visibility.

The average maximum temperature for the month is around 29.8 °C with the average minimum at 24.8 °C.[2] The highest rainfall in the history of Mumbai was recorded on 26 July 2005. On this day, a record 944 mm rainfall fell over the city, causing large scale flooding, claiming several lives and causing large scale property damage.[5]

The weather in August is almost identical July. Towards the latter half of the month, rainfall activity tends to lessen. The coolest days of the monsoon season are often in August. The max temperature might drop to 29.3 °C and the night at 24.5 °C.[2]

In September the intensity of rainfall decreases. The monsoons officially end in the 3rd week of September. September has unsettled weather. The rainfall is short and light and is not continuous. The end of the monsoon, much like the beginning can feature heavy thunderstorms associated with the withdrawal of the monsoon current from the city and surrounding areas. The mean maximum daily temperatures reach 30.1 °C while daily mean minimum daily temperature stays at 24.0 °C.[2]

Mumbai has two weather monitoring stations, one at Santacruz Airport and the other at Navy Nagar near Colaba towards the southern tip of Mumbai.