Established in 1958, it is the second-oldest campus of the Indian Institutes of Technology system. IIT Bombay was ranked by QS World University Rankings[1] [2] as the 187th best university in the world in 2010, coming 47th in Engineering & IT.

IIT Bombay was the second IIT to be established in 1958 with assistance from UNESCO and with funds contributed by the Soviet Union. UNESCO agreed to provide equipment and technical experts mainly from the Soviet Union, while the Government of India accepted the responsibility for all other expenses including the cost of the building project and recurring expenses.[3] 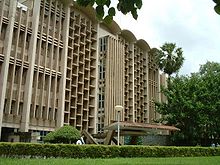 The site chosen for the institute was Powai, eighteen miles (29 km) from the city of Mumbai (then Bombay), with an area of 550 acres (2.2 km2) which was given by the then Bombay State Government. While construction was being completed, the first academic session of the Institute opened on July 25, 1958, in its temporary home at the Synthetic and Art Silk Mills Research Association (SASMIRA) building in Worli, Mumbai with 100 students. These students were selected from over 3,400 applicants for admission to the first year undergraduate programmes in Chemical, Civil, Electrical, Mechanical and Metallurgical Engineering. One of the main objectives of establishing the Institute was to develop facilities for studies in a variety of specialised engineering and technological sciences. The need for establishing adequate facilities for postgraduate studies and research was kept uppermost in mind in the founding years.

While the Institute was functioning provisionally at Worli, an effort was made to expedite the progress of the building project at its permanent location and Jawaharlal Nehru laid the foundation stone of the Institute at Powai on March 10, 1959. 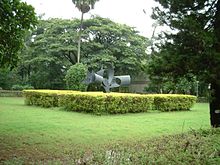 The IIT Bombay campus is located at Powai, a suburb in north eastern Mumbai, between the Vihar and Powai lakes. The campus is divided into clusters of buildings. The academic area chiefly comprises the main building,the various departmental annexes and auditoria. All department annexes are connected by a corridor named Infinite Corridor. Beyond the Convocation Hall lie most of the hostels. There are total 14 hostels, H-15 and H-16 in construction phase; out of these H-10 and H-11 are particularly for female students. 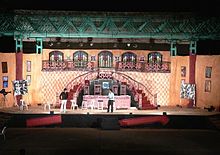 Due to its proximity to the Sanjay Gandhi National Park, the campus is extremely clean, green and mostly untouched by the pollution of the rest of the city. The proximity of the campus to the national park has also led to occasional sightings of panthers and Gharial (Gavialis gangeticus) crocodilians along the banks of Lake Powai. A popular weekly newspaper Planet Powai reports events and happenings of this campus regularly.

The institute has two swimming pools; football, hockey and cricket grounds; and tennis, basketball, squash and volleyball courts. It also has a Students' Activity Center (SAC) for various cultural and other extracurricular activities. In addition to these facilities the campus also houses two high schools, one of which is a Kendriya Vidyalaya and the other is called IIT Campus School.

Cultural activities like dramatics, Speaking, Literary Arts, Music and Fine Arts also mark an important feature in the life of a student of IIT Bombay. Speaking and Literary Arts have always been very popular in the student community with students actively participating in quizzing, writing and debating activities.

The annual cultural festival Mood Indigo is held in the month of December and is supposedly the largest of its kind in Asia.The most attractive feature of this 4-day event are the competitions, exhibitions, games and musical concerts.

The annual Science & Technology festival of IIT Bombay, Techfest is held in the month of January every year and is the largest of its kind in Asia. It comprises various events like competitions, exhibits and talks from guest speakers from around the world. Techfest 2009 was also the first event of its kind in India to conduct its events in other countries.

Apart from cultural and technological activities, the campus is also involved in business activities with bodies like The Entrepreneurship Cell, which support the growth of start ups across the globe.

These college festivals are organised , financially managed and conducted entirely by the students of this Institute. All these festivals and organizations are sponsored by private enterprise[citation needed]}.

The institute also boasts of its an LGBT alliance club called "Saathi"; the first of its kind in India.

At the institutional level, IIT Bombay is governed by a Board of Governors with a Chairman nominated by the Visitor, the Director as a member and the Registrar as secretary. Besides this, there are four persons having specialised knowledge or practical experience in respect of education, engineering or science nominated by the Council. Two professors are nominated by the Senate. Additionally, one technologist or industrialist of repute is nominated by the Government of each of the States of Maharashtra, Madhya Pradesh and Gujarat.

For all academic matters, the Senate is the authority having control and responsibility for the maintenance of standards of instruction, education and examinations and all other allied academic matters. The Senate is mainly constituted of all the professors of the Institute and the Director is the Chairman.

The key people in the execution of the Institute's activities are the Director and Deputy Director who are assisted by Dean (Research and Development), Dean (Planning), Dean (Students Affairs), Dean (Academic Programmes) and Dean (Resources Development), and the Heads of the Departments, Centres and Schools. The Administration is managed by the Registrar, with senior administrative officers being assigned for specific areas such as Estate Management, Materials Management, Personnel Management, Finance and Accounts, and Academic Affairs.

The Academic Office of the institute exists to facilitate, initiate and co-ordinate the academic work of the Institute, particularly the teaching and assessment of students. It acts as the repository of grades and academic records of all students, both past and present. It provides administrative support to the Senate, which is the highest academic body of the Institute

The Head of the Academic Office is the Dean of Academic Programmes, who is a senior professor of the Institute. The Dean is helped by a permanent administrative set up headed by a Deputy Registrar (Academic). Academic Office closely interacts with the Dean of Student Affairs (DOSA), who looks after all non-academic problems of students. The DOSA, as the ex-officio President of the Student Gymkhana, coordinates various co-curricular activities of the students .

IIT Bombay Heritage Fund (IITBHF) and IIT Bombay Alumni Association (IITBAA) are the two official organizations for alumni of IIT Bombay. The alumni website was amongst the earliest alumni websites for an Indian university. The IITBHF is a public charitable organization under US Internal Revenue Code Section 501(c)(3), whose mission is to fund and promote education and research among students, faculty and alumni of the Indian Institute of Technology, Bombay. The IIT Bombay Alumni Association (IITBAA), registered under Section 25 of the Companies Act, 1956, works for strengthening the connections between alumni, enhance ties to their alma mater, and provide services to alumni.

As the official alumni association, IITBAA plays a key role in building the alumni network and supporting the local Chapters which are all over the world, from Bangalore to Boston to the Bay Area. IITBAA staff work with IITBHF volunteers in maintaining the alumni website and the Alumni Directory which allows 30,000-plus IIT Bombay alumni to stay in touch with each other and with their alma mater.

As the Alumni Fund of IIT Bombay, IITBHF has raised over $20 Million for IIT Bombay over the past decade[citation needed], and helped fund major infrastructure projects and new schools on campus including the Kanwal Rekhi School of Information Technology (KReSIT), Shailesh J. Mehta School of Management (SJSOM) and key projects such as the renovation of the hostels (dormitories) on campus.

The GO-IITB (Giving Opportunities for IIT Bombay) initiative was launched in 2010 when the Class of 2010 pledged to give back at least 1% of their annual income to their alma mater under the Give One to IITB program. IITBHF conducts its Annual Fundraising Campaign under the GO-IITB banner, encouraging alumni across the globe to give back to IITB by check, credit card, securities donations or pledges.

To build better student alumni relations, a voluntary student organisation named Student Alumni Relations Cell (abbreviated as SARC) had been formed in 2007. SARC conducts events like Phonathon and LSSD to keep in touch with the alumni and those like Placement Information Programme, Lecture Series and Alumni Student Mentorship Programme to increase the interaction between the current students of IIT Bombay and the alumni.

IIT Bombay has 14 departments, 10 multi-disciplinary centres, and 3 schools of excellence. The academic departments in IIT Bombay include the following:

The following multi-disciplinary centres are located in IIT Bombay:

The three schools of excellence in IIT Bombay are:

IIT Bombay offers a wide variety of courses of study in engineering, pure sciences, design, management and humanities with a primary focus on engineering. The university is a member of "Links to Asia by Organizing Traineeship and Student Exchange" (LAOTSE), an international network of leading universities in Europe and Asia exchanging students and senior scholars.

Every year, IIT Bombay awards degrees, B.Tech, M.Tech, Dual Degree (B.Tech and M.Tech), M.Mgmt, MSc and Ph.D to more than 1,000 students. The undergraduate students at IIT Bombay are selected through the Joint Entrance Examination of the IITs. At a given time, the campus is home to more than 6,000 people: students, professors, and non academic staff.

Faculty members from IIT Bombay undertake industry sponsored research and consultancy projects that are made available through the institute. These are funded by various national agencies like the Department of Science and Technology, Department of Electronics, Department of Space, Aeronautical Development Agency, Department of Atomic Energy, and Oil and Natural Gas Commission (ONGC). Many are also working on projects of national importance. A few projects are also being funded by international agencies. Typically in one year, there are about 400 on-going sponsored projects. The sponsored research has ushered in intense research activity leading to the formation of active research groups and has helped in the creation of modern research facilities in key areas.[6]

Consultancy has been a major avenue of interaction between faculty and industry. Consultancy work provides an opportunity to tackle live industrial problems and enhance professional expertise. There are collaborative and consultancy projects with many industries, some abroad. About 700 to 800 projects are executed every year[citation needed].

The office of the Dean (R&D) provides the necessary liaison with industry and sponsoring agencies. The office helps industry to identify faculty expertise and institutional facilities, and assists faculty in identifying industry problems.[7] 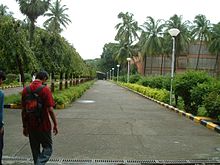 There are also a number of central facilities such as the Central Library, Central Workshop, and Printing Press. Many new research facilities have been acquired or developed in the last few years. One of the most important of them is the Computer Centre which started functioning in 1986 with facilities which have been continuously updated. The Computer Aided Design Centre with its own mini computers and work stations, supplemented by additional computing facilities, caters to CAD activity in Chemical Engineering and Metallurgical Engineering. Research groups like VLSI Design, CAD/CAM also have computing facilities which are accessible to other departments for development activities. Recently, work on developing medical implants has been initiated. The OrthoCAD Network Research Cell was established in 2007 to jump-start indigenous research and development activities in orthopaedic reconstruction systems. Important experimental facilities set up by various departments include laboratories for robotics, biotechnology, microelectronics, microprocessor applications, telematics, remote sensing, low temperature physics and aerodynamics.