The Indian Institute Of Technology, Delhi (Hindi: भारतीय प्रौद्योगिकी संस्थान दिल्ली ) (located at Hauz Khas) (formerly College of Engineering and Technology Delhi), commonly known as IIT Delhi or IITD, is a college of engineering in Delhi, India. It forms a part of the league along with other IITs in India: the Indian Institute of Technology, Bombay, Guwahati, Kanpur, Kharagpur, Madras, Roorkee, Bhubaneswar, Gandhinagar, Hyderabad, Indore, Jodhpur, Mandi, Patna and Ropar.

The concept of the IITs was first introduced in a report in the year 1945 by Sh. N.M.Sircar, then member of Education on Vicerory’s Executive Council. Following his recommendations, the first Indian Institute of Technology was established in the year 1950 in Kharagpur. In his report, Shri Sircar had suggested that such Institutes should also be started in different parts of the country. The Government having accepted these recommendations of the Sircar Committee decided to establish more Institutes of Technology with the assistance of friendly countries who were prepared to help. The first offer of help came from USSR who agreed to collaborate in the establishment of an Institute through UNESCO at Bombay. This was followed by the Institutes of Technology at Madras, Kanpur and Delhi with collaborations with West Germany, USA and UK respectively. Indian Institute of Technology, Guwahati was established in 1995 and the University of Roorkee was converted into an IIT in 2001.

The Government of India negotiated with the British Government for collaboration in setting up an Institute of Technology at Delhi. The British Government agreed in principle to such a collaboration, but were inclined initially to start in a modest way. It was therefore agreed that a College of Engineering & Technology should be established at Delhi with their assistance. A trust called the Delhi Engineering College Trust was established with the help of the UK Government and the Federation of British Industries in London. Later H.R.H. Prince Philips, Duke of Edinburgh, during his visit to India, laid the foundation stone of the College at Hauz Khas on January 28,1959.

The College of Engineering & Technology was registered as a Society on 14th June 1960 under the Societies Registration Act No. XXI of 1860 (Registration No.S1663 of 1960-61). The first admissions were made in 1961. The students were asked to report at the College on 16th August 1961 and the College was formally inaugurated on 17th of August 1961 by Prof. Humayun Kabir, Minister of Scientific Research & Cultural Affairs. The College was affiliated to the University of Delhi.

The College of Engineering & Technology established in 1961 was declared an Institution of National Importance under the “Institute of Technology (Amendment) Act 1963” and was renamed “Indian Institute of Technology Delhi”. It was then accorded the status of a University with powers to decide its own academic policy, to conduct its own examinations, and to award its own degrees.

According to Section 4 of the Act, each of the Institutes shall be a body corporate having perpetual succession and a common seal and shall, by its name, sue and be sued. The body corporate constituting each of the Institutes, shall consist of a Chairman, a Director and other members of the Board for the time being of the Institute. IIT Delhi is an autonomous statutory organisation functioning in terms of the Institutes of Technology Act, 1961 amended vide the Institutes of Technology (Amendment) Act, 1963 and the Statutes framed thereunder. Responsibility for the general superintendence, direction and control of the affairs of the Institute is vested in the Board of Governors. The Board of Governors functions through its Standing Committees - Finance Committee, Building & Works Committee and such other adhoc committees which are constituted by it from time to time to consider specific issues. The control and general regulation for the maintenance of standards of instruction, education and examination in the Institute vests in the Senate. The Senate is responsible for formulation of the academic policies and to design curricula, the courses of studies and the system of examination. The Senate functions through its Standing Boards/Committees and Sub-committees that may be constituted by it to look into the specific matters arising from time to time.

IIT Delhi is located in Hauz Khas, South Delhi. The campus of 320 acres (130 ha)[1] is surrounded by the beautiful Hauz Khas area and monuments such as the Qutub Minar and Lotus Temple. The campus is also close to other educational institutions such as the Jawaharlal Nehru University, All India Institute of Medical Sciences and Indian Statistical Institute.

The inside of the campus resembles a city, with gardens, lawns, residential complexes and wide roads. The campus has its own water supply and backup electricity supply along with shopping complexes to cater to the daily needs of residents. 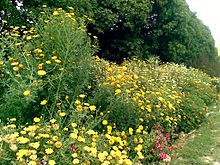 A garden in IIT Delhi

The IIT-D campus is divided into four zones:

The student residential zone is divided into two main sectors—one for men's hostels and another for women's hostels.

There are 13 hostels (eleven for boys and two for girls). There are also apartments for married students. All the hostels are named after mountain ranges in India - Karakoram, Aravali, Himadri, Jwalamukhi, Kailash, Kumaon, Nilgiri, Satpura, Girnar, Shivalik, Udaigiri, Vindhyachal and Zanskar, out of which Himadri and Kailash are for girls. The residential apartments are named after ancient Indian universities - Taxila and Nalanda. Girnar House has the largest number of residents in 2011 with more than 700 students[citation needed]. Each Hostel has its distinct culture of sports and cultural activities. Hostels compete in inter hostel events to bring home various trophies which include RCA and GC, which are the highest awards for cultural and sports accomplishments over a year by a particular hostel. RCA was claimed by Jwalamukhi in year 2010 and Kumaon in 2011. Academic year ends with an annual function of hostels known as 'House day' in which the passing out batch and the freshers give various cultural performances and awards are distributed for outstanding contribution to various hostel activities. 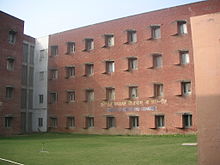 The Student Activity Center or SAC is a part of the Student Recreation Zone in IIT Delhi. The SAC is for the extracurricular activities of the students. The SAC consists of a gymnasium, swimming pool, pool and billiards rooms, three squash courts, two table tennis rooms, a badminton court, a music room, a fine arts room, a robotics room and a committee room which is used to organize quizzing and debating events. The SAC also has an Open Air Theater where concerts are hosted. Students can use the radio broadcasting facility in the SAC although its use has declined over the years.

IIT Delhi has 13 departments, 11 multi-disciplinary centers, and two schools of excellence. Together they offer around 700 courses every semester.[2]

The academic departments in IIT Delhi include the following: 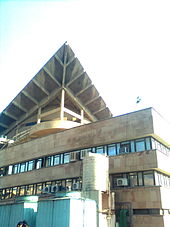 An inter-disciplinary center differs from a department in the fact that it deals with an overlap of two or more disciplines of engineering or science. Similar to the departments the centers also offer programs though they offer these courses only at the post-graduation level. The following multi-disciplinary centers are located in IIT Delhi:

A school of excellence is an externally funded (either from an alumnus or an organization) school functioning as a part of the institute. There are three such schools in IIT Delhi which are:

In 2010 the institute, for its excellence in co-operation projects with the corporate world in India, was chosen to be a part of the BBNM Group. Today, they are represented among the BBNM Member schools.[3]

The Association for Computing Machinery is an educational and scientific society which works with the motto of "Advancing Computing as a Science and Profession". The IIT Delhi Student Chapter[8] of the ACM was established in 2002 to address the needs of the IIT Delhi computing community. The IIT Delhi Chapter won the ACM Student Chapter Excellence Award[9] for its Outstanding Activities during 2009-10.

Five Point Someone, a novel by Chetan Bhagat, is based on the protagonist's experiences in IIT Delhi.