The City of Maribyrnong is a Local Government Area located within the metropolitan area of Melbourne, Victoria, Australia. It comprises the inner western suburbs between 5 and 10 kilometres from the Melbourne city centre. It was formed in 1994 from the merger of the City of Footscray and part of the City of Sunshine. 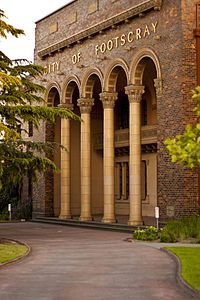 City of Footscray building, located corner of Napier and Hyde Street in Footscray 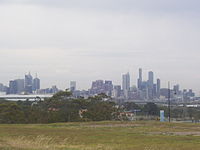 The City of Maribyrnong is a place of diversity, opportunities and challenges. The level and type of development occurring over the past ten years, and likely to continue for the next ten to twenty years, is unique to inner Melbourne. Many of the City’s former industrial sites have been replaced by residential developments and for the first time in ten years we have witnessed population increases. This trend will continue and in the next twenty years we are expected to welcome an additional 16,000 residents.

The social character of the community is also changing. New residents are generally more educated and classified as higher income earners. The City also continues to attract new cultural groups. People are attracted by the close proximity to Melbourne CBD, period homes, public transport hubs, cultural diversity, and the natural environment of the Maribyrnong River.

Figures below are drawn from 2006 Census unless otherwise stated. For detailed demographics visit the City of Maribyrnong Community Profile.

The City of Maribyrnong is a dynamic economic entity. There are approximately 5,392 businesses employing in excess of 35,000 people, yet the resident workforce is only around 28,246. Manufacturing was the largest employer of Maribyrnong residents with 3,451 employees, followed by retail with 2,668, health care 2,576; scientific and technical services 2,185 and education with 2,145. Maribyrnong’s key employers include Victoria University, Western Health, Lonely Planet, Highpoint Shopping Centre, Western Bulldogs Football Club, Mobil Australia and Sugar Australia (CSR).

On average, 34% of the labour force has university qualifications, in some parts of the municipality the proportion is as high as 53%. The highest concentration of university qualified residents is in the Footscray, Seddon, Yarraville corridor.

Victoria University has two principal campuses located in Footscray with a student population of around 15,000 and staff of almost 1,200. This represents the largest concentration of tertiary activity in Melbourne’s West. Victoria University is also Maribyrnong City Council’s largest employer, second only to Western Health.