The Shire of Moorabool is a Local Government Area in Victoria, Australia. It is located in the southwestern part of the state. It has an area of 2,110 square kilometres. In 2006 it had a population of 25,474.

The administrative centre is at Ballan, while the largest urban centre is Bacchus Marsh. Other small population areas in the east are Balliang, Mount Wallace and Myrniong, in the centre Blackwood, Greendale, Gordon, Koorweinguboora and Mount Egerton and to the west Bungaree, Elaine and Wallace.

The shire was formed in 1994 by the amalgamation of the Shire of Bacchus Marsh, Shire of Ballan and parts of Shire of Bungaree and the City of Werribee. 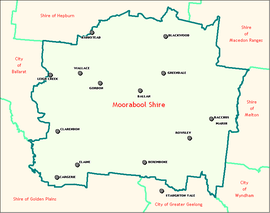