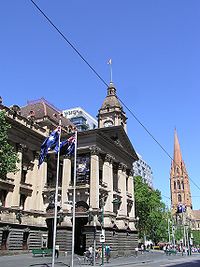 The City of Melbourne is a Local Government Area in Victoria, Australia, located in the central city area of Melbourne. The city has an area of 36 square kilometres and has an estimated population of 93,105 people. The city's motto is "Vires acquirit eundo" which means "She gathers strength as she goes."

Melbourne was founded in 1835, during the reign of King William IV, with the arrival of the schooner Enterprize near the present site of the Queen's Wharf, as a barely legal, speculative settlement that broke away from New South Wales. Unlike other Australian capital cities, Melbourne did not originate under official auspices, instead forming through the foresight of settlers from Tasmania.

The town of Melbourne was raised to the status of a city by Letters Patent of Queen Victoria dated 25 June 1847, five years after its incorporation as a town. The Letters Patent also constituted the Anglican Diocese of Melbourne and declared Melbourne a cathedral city. A motion was tabled at a meeting of the Town Council to alter the style and title of Melbourne from a town to a city, a draft Bill was approved and transmitted to the Government for introduction to the Legislature. On 3 August 1849, Act 13 Victoria No. 14 was finally assented to as "An Act to effect a change in the Style and Title of the Corporation of Melbourne rendered necessary by the erection of the Town of Melbourne to a City".[3]

The city's initial boundaries, as set down in Act 8 Victoria No. 12 (19 December 1844) extended from Point Ormond in Elwood up Barkly Street and Punt Road to the Yarra River, along the river to Merri Creek at Abbotsford, then west along Brunswick Road to Moonee Ponds Creek, then south past Flemington Bridge to Princes Pier in Port Melbourne.[2] The Act imposed on the Mayor a duty to set up “permanent and conspicuous boundary marks of iron, wood, stone or other durable material” along or near the line of the Town’s boundaries—this was undertaken by Mayor James Frederick Palmer and Town Clerk John Charles King on 4 February 1846.[4]

During the 1850s, Collingwood, Fitzroy and Richmond seceded from Melbourne (all are, since 1994, part of the City of Yarra), as did South Melbourne, whilst other parts became parts of the neighbouring districts of St Kilda and Port Melbourne, and the border between Brunswick and Melbourne moved south one block to Park Street.[2]

The Melbourne City coat of arms

On 18 December 1902, King Edward VII conferred the title "Lord Mayor" on the mayor of the City of Melbourne.

On 30 October 1905, Melbourne absorbed two neighbouring council areas. Now included in the City was the Borough of Flemington and Kensington which had been formed in 1882 when it broke away from the City of Essendon. The second, the Town of North Melbourne, formerly known as Hotham, had been established on 30 September 1859 and been granted town status on 18 December 1874. Both town halls are still in use today as public buildings—the former in Kensington near the present-day Newmarket railway station; the latter in Errol Street, North Melbourne.

The Melbourne and Geelong Corporations Act 1938 allowed for three councillors for each of the eleven wards, with a general election held on 24 August 1939. Following a recommendation by the Local Government Advisory Board in 1978, an Order in Council (27 February 1979, effective from 19 May 1979) reduced this to eight wards. In December 1980, the Hamer Government dismissed the council, and appointed three Commissioners to determine how the boundaries could best be altered to produce more effective local government, with special regard to Melbourne's central business district and its importance to the state, as well as to advise changes needed to the constitution, structure, functions and administration. However, in 1982, with the election of a new Labor government under John Cain, the Act establishing the commission was repealed, and the Melbourne Corporation (Election of Council) Act 1982 established six wards, for which an election was held on 4 December 1982. Three years later, an additional ward was added.[2]

In 1993, the City of Melbourne Act specified changes to the boundaries which saw Melbourne gain Southbank and the Victorian Arts Centre on 18 November 1993, and the city was resubdivided into four wards - Flagstaff, University, Hoddle and Domain. The wards were abolished in 2001, with the council currently having an elected Lord Mayor with a Deputy Lord Mayor and seven other councillors.[4]

In 2005, the council announced the construction of a new 6 star environmental office building Council House 2 in Little Collins Street.

On 2 July 2007, the City of Melbourne almost doubled in size when the suburb of Docklands was added to its jurisdiction, having been transferred from the administration of the State Government.

The City of Melbourne has six sister cities.[7] They are:

Some other local councils in the Melbourne metropolitan area have sister city relationships; see Local Government Areas of Victoria.