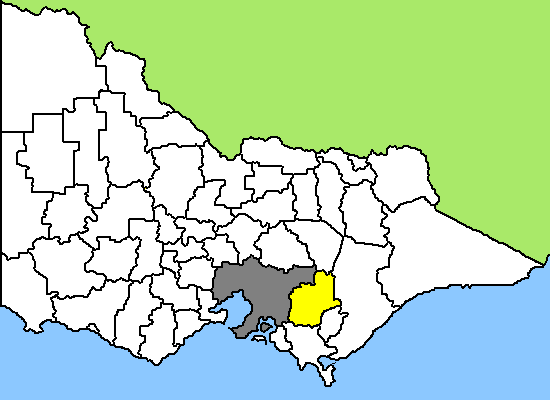 Baw Baw was formed in from the amalgamation of the former Buln Buln and Narracan shires, the (previously the Shire of Warragul), and some parts of the . It was named for in the shire's northeast, its highest peak and the site of a small ski resort.

The more densely populated southern half of the Shire consists of low rolling hills given over primarily to dairy farming and other agriculture. The northern half lies in the and its foothills, where forestry remains an important industry. Tourism is also important in the region, aided by its proximity to and easy access from Melbourne. The shire is noted for its rural scenery and natural beauty, as well as gourmet foods and wines. The historic gold-mining town of Walhalla is located in the northeast of the shire. The major electricity-producing region of the lies immediately to the shire's east.

Many of the Shire's larger towns are located along the and main line, which cross the southern part of the shire. From west to east these include: Longwarry, Drouin, Warragul (the largest town and administrative centre), Darnum, Yarragon, and Trafalgar. North of Warragul are Fumina South, Neerim South and Noojee (from which runs the main road to Mount Baw Baw), while south of Trafalgar in the lies the town of Thorpdale. The towns of Rawson, Erica and Parkers Corner are located near Walhalla amongst the foothills of Mount Baw Baw.