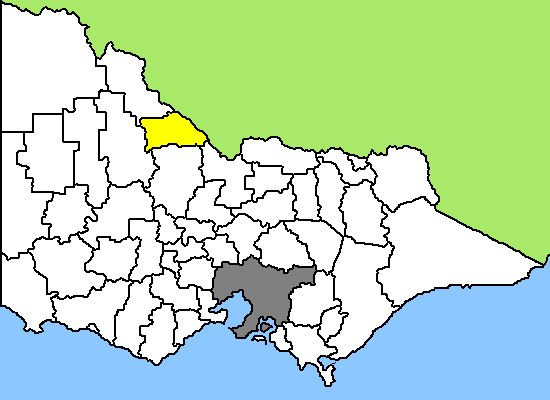 url = http://www.gannawarra.vic.gov.au/
stategov = Rodney, Swan Hill
fedgov = Murray, Mallee
near-nw = Swan Hill
near-n = "Wakool (NSW)"
near-ne = "Wakool (NSW)"
near-w = Buloke
near-e = "Murray (NSW)"
near-sw = Buloke
near-s = Loddon
near-se = CampaspeThe Shire of Gannawarra is a Local Government Area in . It is located in the north-western part of the state. The main towns are Cohuna, Kerang and Quambatook. It has an area of 3,728 square kilometres. In it had a population of 11,296. The Shire was formed in from the merger of the and most parts of the and .

The northeastern border of the shire is the . The flows through the shire, feeding into the Murray. The is a significant source of timber, supplying a historic sawmill in Koondrook. is the largest inland island in the world. [cite web |url=http://www.gannawarra.vic.gov.au/Page/page.asp?Page_Id=176&h=0 |publisher=Gannawarra Shire Council |title=Gannawarra Shire Council - Murray River Region |accessdate=2007-06-10 |date=13 March 2003] It is between the Murray River and the Gunbower Creek, an of the Murray.

The western part of the shire is predominantly used for cereal grain production. The north and east have significant dairying and milk processing.

Tourists are attracted to the rivers (for fishing) and also the lakes (for bird watching and water sports).