The Books of Chronicles (Hebrew Dibh're Hayyamim, דברי הימים, Greek Paralipomenon, Παραλειπομένων) are part of the Hebrew Bible. In the Masoretic Text, it appears as the first or last book of the Ketuvim (the latter arrangement also making it the final book of the Jewish bible). Chronicles largely parallels the Davidic narratives in the Books of Samuel and the Books of Kings.[1] In the Christian ordering, it is divided into two parts, 1 & 2 Chronicles, immediately following 1 & 2 Samuel and 1 & 2 Kings as a summary of them with minor details sometimes added. The division of Chronicles and its place in the Christian canon of the Old Testament are based upon the Septuagint. 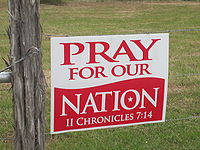 In Hebrew the book is called Divrei Hayyamim (i.e. "the matters [of] the days"), based on the phrases sefer divrei ha-yamim le-malkhei Yehudah and "sefer divrei ha-yamim le-malkhei Israel" ("book of the days of the kings of Judah" and "book of the days of the kings of Israel"), both of which appear repeatedly in the Books of Kings. Chronicles was formerly presumed to represent the source-material whence Samuel and Kings were composed; that is, the kings' official Day-Books, much like the U.S. Congressional Record of modern times.

In the Greek Septuagint (LXX), Chronicles bears the title Paralipomenon (Παραλειπομένων), i.e., "that which has been left out or left to one side".[2] According to the Chronicles-Ezra-Nehemiah theory, it contains material set aside from the rest of the book of Ezra, which was canonized first.[3] In other words, scholars have theorized that these books were originally composed as one book by a single author, but later were split apart. Although now debated, this theory has been the scholarly consensus for many centuries.[3]

Chronicles summarizes and reviews the deuteronomic history of the foregoing books, adding only minor details here and there, and therefore does not "supplement" the history to any noteworthy degree.

Jerome, in the introduction to his Latin translation of the books of Samuel and Kings (part of the Vulgate), referred to the book as a chronikon ("Chronicles" in English). The book itself is titled Paralipomenon in the Vulgate.[4][5]

In the masoretic text, Chronicles is part of the third part of the Tanakh, namely the Ketuvim ("Writings"). In most printed versions it is the last book in Ketuvim (following Ezra-Nehemiah). This order is based on medieval Ashkenazic manuscripts. The order of the books of Ketuvim given in the Talmud (Bava Batra 14b-15a), though it differs from the Ashkenazic order, also places Chronicles at the end of Ketuvim. In these traditions, Chronicles becomes the final book of the Bible. However, in early Tiberian manuscripts such as the Aleppo codex and the Leningrad codex, Chronicles is placed as the first book in Ketuvim, preceding Psalms.

The Jewish ordering of the canon suggests that Chronicles is a summary of the entire span of history to the time it was written. Such broad scope of the book may be the reason the Chronicler commences his genealogy with Adam. Steven Tuell argues that having Chronicles as the last book in the canon is appropriate since it "attempts to distill and summarize the entire history of God's dealings with God's people." [6]

In Christian Bibles, Chronicles 1 and 2 are part of the Old Testament, following Kings and before Ezra. This order is based upon that found in the Septuagint and followed by the Vulgate, since the material is historical and the narrative flows seamlessly into the book of Ezra.

Based on its contents, the book may be divided into four parts:

However, it is also possible to divide the book into three parts rather than four by combining the sections treating David and Solomon, since they both ruled over a combined Judah and Israel, unlike the last section that contains the chronicle of the Davidic kings who ruled the Kingdom of Judah alone.

For over a century biblical scholars believed that Chronicles and the narrative portions of Ezra-Nehemiah came from the same author, but many scholars now believe this to be improbable.[7]

The last events in Chronicles take place in the reign of Cyrus the Great, the Persian king who conquered Babylon in 539 BCE; this sets an earliest possible date for the book. Martin Noth was of the opinion that it dated from the 3rd century BCE, and Gary Knoppers, while acknowledging that Chronicles theoretically could be written anywhere between 500 and 250 BCE, tends to see it as probably dating between 325 and 275 BCE.

In its general scope and design, Chronicles is not so much historical as didactic.[8][9][10] The principal aim of the writer appears to be to present moral and religious truth. He does not give prominence to political occurrences, as is done in the books of Samuel and Kings, but to religious institutions, such as the details of the temple service. The genealogies were an important part of the public records of the Hebrew state. They were the basis on which the land was distributed and held, and by which the public services of the temple were arranged and conducted. The Chronicles are an epitome of the sacred history from the days of Adam down to the return from Babylonian exile, a period of about 3,500 years. The writer gathers up the threads of the old national life broken by the captivity.

Additionally, though the Chronicler's principal source is the Deuteronomistic History, coming primarily, as stated above, from the books of 2 Samuel and 1–2 Kings[11] and other public records and sources (see above), the Chronicler also uses other biblical sources, particularly from the Pentateuch, as redacted and put together by P (the Priestly Source).[12] One example is the Chronicler's use of genealogies in 1 Chronicles 1-9, which seem to come directly from the Pentateuch and possibly, as well, from Joshua and other books.[12] There are in the Chronicles also many quotations from the Book of Psalms and occasional references from the books of Isaiah, Jeremiah and Ezekiel.[12] The Chronicler appears to use other works that we no longer possess from the Deuteronomistic historians.[12] A typical example can be found in 2 Chronicles 9:29 and references the work Acts of Solomon and, additionally, several unknown prophets, such as Ahijah the Shilonite and the seer Ido.[12] And there are several non-biblical historically and archaeologically attested details that can only be found in Chronicles, including the account of the Egyptian Shistak's campaign in the late 10th century BCE (2 Chronicles 12:2–4), and Hezekiah's preparing and safeguarding Jerusalem's water supply prior to the Assyrian attack in the late 8th century BCE (2 Chronicles 32:2-4).[13]

As compared with Samuel and Kings, the Book of Chronicles omits many particulars there recorded and includes many things not found in the other two documents. Often the Chronicles paint a somewhat more positive picture of the same events. This corresponds to their time of composition: Samuel and Kings were probably completed during the exile, at a time when the history of the newly wiped out Hebrew kingdoms was still fresh in the minds of the writers. The Chronicles, on the other hand, were written much later, after the restoration of the Jewish community in Palestine, at a time when the kingdoms were beginning to be regarded as the nostalgic past, something to be at least partially imitated, not something to be avoided. Scholars continue to debate over which history is more reliable: Chronicles or Samuel-Kings.

It has also been observed that another peculiarity of the book is that it substitutes more modern and more common expressions for those that had then become unusual or obsolete. This is seen particularly in the substitution of modern names of places, such as were in use in the writer's day, for the old names; thus Gezer (1 Chr. 20:4) is used instead of Gob (2 Sam. 21:18), etc.[14]