Epistle to the Colossians

Epistle to the Colossians

The Epistle of Paul to the Colossians, usually referred to simply as Colossians, is the 12th book of the New Testament. It was written, according to the text, by Paul the Apostle to the Church in Colossae, a small Phrygian city near Laodicea and approximately 100 miles from Ephesus in Asia Minor.[1]

Scholars have increasingly questioned Paul's authorship and attributed the letter to an early follower instead.[1] The authenticity of the letter, however, has been defended with equal strength.[1]

During the first generation after Jesus, Paul's epistles to various churches helped establish early Christian theology. Written in the 50s while Paul was in prison, Colossians is similar to Ephesians, also written at this time.[2] Increasingly, critical scholars ascribe the epistle to an early follower writing as Paul. The epistle's description of Christ as pre-eminent over creation marks it, for some scholars, as representing an advanced christology not present during Paul's lifetime.[3] Defenders of Pauline authorship cite the work's similarities to Philemon, which is broadly accepted as authentic.[1]

The letter is supposed (or intended) to be written by Paul at Rome during his first imprisonment. (Acts 28:16, 28:30) If the letter is not considered to be an authentic part of the Pauline corpus it might be dated during the late 1st century, possibly as late as the 80s.[4]

Like some of his other epistles (e.g., those to Corinth: 1 Corinthians, 2 Corinthians), this seems to have been written in consequence of information which had been conveyed to Paul of the internal state of the church there by Epaphras[1:4-8]. Epaphras was a faithful minister to the Colossians who was visiting Paul when the epistle was written[1:7][4:12].

Published in 1563, comments in Polish Calvinist translation in the Brest Bible point Tychicus and Onesimus to be authors of the epistle.

The letter's author claims to be Paul, but authorship began to be authoritatively questioned during the 19th century.[5] Pauline authorship was held to by many of the early church's prominent theologians, such as Irenaeus, Clement of Alexandria, Tertullian, Origen of Alexandria and Eusebius.[6] 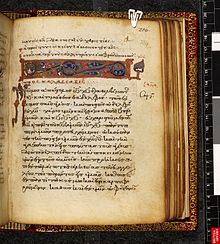 The first page of Colossians in Minuscule 321 gives its title as προς κολοσσαεις, "to the Colossians".

Those who are advocates of Pauline authorship defend the differences that there are between elements in this letter and those commonly considered the genuine work of Paul (e.g. 1 Thessalonians). It is argued that these differences can come by human variability, such as by growth in theological knowledge over time, different occasion for writing, as well as use of a different secretaries (or amanuensis) in composition.[11] As it is usually pointed out by the same authors who note the differences in language and style, the number of words foreign to the New Testament and Paul is no greater in Colossians than in the undisputed Pauline letters (Galatians, of similar length, has 35 hapax legomena). In regards to the style, as Norman Perrin, who argues for pseudonymity, notes, 'The letter does employ a great deal of traditional material and it can be argued that this accounts for the non-Pauline language and style. If this is the case, the non-Pauline language and style are not indications of pseudonymity.'[12] Not only that, but it has been universally noted that Colossians has indisputably Pauline stylistic characteristics, found nowhere else in the New Testament.[12][13] Advocates of Pauline authorship also point out that the differences between Colossians and the rest of the New Testament is not as great as it is purported to be.[14] 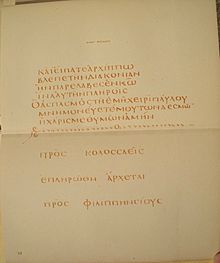 The last page of Colossians in Codex Claromontanus

Colossae is in the region of the seven churches of Revelation 1-3. In Colossians 4:13 there is mention of local brethren in Colosse, Laodicea, and Hierapolis. Colosse was approximately 12 miles from Laodicea and 14 miles from Hierapolis. Members of the congregation at Colosse had incorporated pagan elements into their practice, including worship of elemental spirits. The Epistle to the Colossians declares Christ's supremacy over the entire created universe and exhorts Christians to lead godly lives. The letter consists of two parts: first a doctrinal section, then a second regarding conduct. In both sections, false teachers who have been spreading error in the congregation are opposed.[3]

In its doctrinal sections, Colossians explains that there can be no need to worship anyone or anything but Christ because Christ is supreme over all creation. All things were created through him and for him, and the universe is sustained by him. God had chosen for his complete being to dwell in Christ. The "cosmic powers" revered by the false teachers had been "discarded" and "led captive" at Christ's death. Christ is the master of all angelic forces and the head of the church. Christ is the only mediator between God and humanity, the unique agent of cosmic reconciliation.

The doctrinal part comprises the first two chapters. Its main theme is developed in chapter 2, with a warning against being drawn away from Him in whom dwelt all the fullness of the deity[2:9], and who was the head of all spiritual powers. Christ was the head of the body of which they were members; and if they were truly united to him, what more did they need?

Colossians praises the spiritual growth of the recipients because of their love for all the set-apart ones in Christ[1:4][1:8]. It calls them to grow in wisdom and knowledge that their love might be principled love and not sentimentality[1:9-11]. "Christ in you is your hope of glory!"[1:27].[3]

Colossians denounces ascetic practices or avoiding certain foods because Christ's death put an end to such distinctions. Believers are one in Christ, not divided between circumcised and uncircumcised, slave and free, and so on. He then calls on his audience to fulfill all domestic and social obligations.

The practical part of the Epistle, 3-4, enforces various duties naturally flowing from the doctrines expounded. They are exhorted to mind things that are above [3:1-4], to mortify every evil principle of their nature, and to put on the new man [3:5-14]. Many special duties of the Christian life are also insisted upon as the fitting evidence of the Christian character. The letter ends with customary prayer, instruction, and greetings.[3]

Colossians is often categorized as one of the so-called "prison epistles" that include Ephesians, Colossians, Philippians, and Philemon. Colossians has some close parallels with the letter to Philemon—names of some of the same people (e.g., Timothy, Aristarchus, Archippus, Mark, Epaphras, Luke, Onesimus, and Demas) appear in both epistles.

Tychicus is named as the bearer of the letter, just as he is in Ephesians and Philemon, and he is to tell the recipients of the state of the apostle[4:7-9]. After friendly greetings[4:10-14], he bids them exchange this letter with the one he had sent to the neighbouring Laodicean Church. (The apocryphal Epistle to the Laodiceans was almost certainly forged based on this instruction.) He then closes the letter with the usual salutation.

Colossians calls, in several places, for faithfulness to be recognized:

Online translations of the Epistle to the Colossians: