First Epistle to the Corinthians

First Epistle to the Corinthians
This article is about the book in the New Testament of the Bible. For the Brazilian football (soccer) team, see Sport Club Corinthians Paulista. For other uses, see Corinthian.

The first epistle of Paul the apostle to the Corinthians, often referred to as First Corinthians (and written as 1 Corinthians), is the seventh book of the New Testament of the Bible. Paul and "Sosthenes our brother" wrote this epistle to "the church of God which is at Corinth", in Greece.[1Cor.1:1-2]

There is near consensus among historians and Christian theologians that Paul is the author of the First Epistle to the Corinthians, typically classifying its authorship as "undisputed" (see Authorship of the Pauline Epistles). The letter is quoted or mentioned by the earliest of sources, and is included in every ancient canon, including that of Marcion. However, two passages may have been inserted at a later stage. The first passage is 1 Cor 11:2-16 dealing with praying and prophesying with headcovering.[1] The second passage is 1 Cor 14:34-35 which has been hotly debated. Part of the reason for doubt is that in some manuscripts, the verses come at the end of the chapter instead of at its present location. Furthermore, Paul is here appealing to the law which is uncharacteristic of him. Lastly, the verses come into conflict with 11:2-16 where women are allowed to preach. [2]

The traditional subscription to the epistle, translated in the King James Bible, states that this epistle was written at Philippi, perhaps arising from a misinterpretation of 16:5, "For I do pass through Macedonia," as meaning, "I am passing through Macedonia." In 16:8 Paul declares his intention of staying in Ephesus until Pentecost. This statement, in turn, is clearly reminiscent of Paul's Second Missionary Journey, when Paul travelled from Corinth to Ephesus, before going to Jerusalem for Pentecost (cf. Acts 18:22). Thus, it is possible that I Corinthians was written during Paul's first (brief) stay in Ephesus, at the end of his Second Journey, usually dated to early 54 AD. However, it is more likely that it was written during his extended stay in Ephesus, where he refers to sending Timothy to them (Acts 19:22, I Cor. 4:17). Also, his references to Apollos (1:12, 3:4, etc.) show that Apollos was known to Paul and the church at the time of writing, which would preclude the first recorded visit to Ephesus (See Acts 18:24-28). 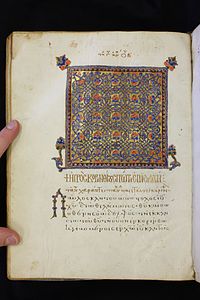 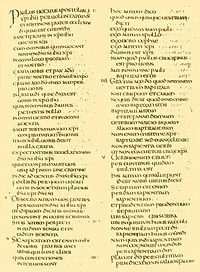 The epistle may be divided into seven parts:[5]

The foundation of Christ 1 Corinthians 3:11; posted at the Menno-Hof Amish & Mennonite Museum in Shipshewana, Indiana

Paul wrote this letter to correct what he saw as erroneous views in the Corinthian church. Several sources informed Paul of conflicts within the church at Corinth: Apollos (Acts 19:1), a letter from the Corinthians, the "household of Chloe," and finally Stephanas and his two friends who had visited Paul (1:11; 16:17). Paul then wrote this letter to the Corinthians, urging uniformity of belief ("that ye all speak the same thing and that there be no divisions among you," 1:10) and expounding Christian doctrine. Titus and a brother whose name is not given were probably the bearers of the letter to the church at Corinth (2 Corinthians 2:13; 8:6, 16–18).

In general, divisions within the church at Corinth seem to be a problem, and Paul makes it a point to mention these conflicts in the beginning. Specifically, pagan roots still hold sway within their community. Paul wants to bring them back to what he sees as correct doctrine, stating that God has given him the opportunity to be a “skilled master builder” to lay the foundation and let others build upon it (1 Cor 3:10).

Later, Paul wrote about immorality in Corinth by discussing an immoral brother, how to resolve personal disputes, and sexual purity. Regarding marriage, Paul states that it is better for Christians to remain unmarried, but that it is better to marry than "burn" (πυροῦσθαι) which Christians have traditionally thought meant to burn with sinful desires. The Epistle may include marriage as an apostolic practice in 1 Corinthians 9:5, "Do we not have the right to be accompanied by a believing wife, as do the other apostles and the brothers of the Lord and Cephas (Peter)?" However, the Greek word for 'wife' is the same word for 'woman.' The Early Church Fathers including Tertullian, Jerome, and Augustine state the Greek word is ambiguous and the women in 1 Corinthians 9:5 were women ministering to the Apostles as women ministered to Christ (cf Matthew 27:55, Luke 8:1-3), and were not wives,[6] and assert they left their 'offices of marriage' to follow Christ and to preach.[7]

Paul also argues unmarried people must please God, just like married people must please their spouses. The letter is also notable for mentioning the role of women in churches, that for instance they must remain silent (1 Cor. 11:2-16, 14:34-35), and the role of prophecy and speaking tongues in churches. After discussing his views on worshipping idols, Paul finally ends with his views on resurrection. He states that Christ died for our sins, and was buried, and rose on the third day according to the scriptures (1 Cor. 15:3). Paul then asks: “Now if Christ is preached as raised from the dead, how can some of you say that there is no resurrection of the dead?” (1 Cor. 15:12) and addresses the question of resurrection.

Throughout the letter, Paul presents issues that are troubling the community in Corinth and offers ways to fix them. Paul states that this letter is not meant to make them feel ashamed but to “admonish” them as beloved children. They are expected to become imitators of Jesus and follow the ways in Christ as he, Paul, teaches in all his churches (1 Cor. 4:14-16).

According to a writer cited by the author of the Easton's Bible Dictionary, this epistle

"shows the powerful self-control of the apostle in spite of his physical weakness, his distressed circumstances, his incessant troubles, and his emotional nature. It was written, he tells us, in bitter anguish, 'out of much affliction and pressure of heart . . . and with streaming eyes' (2 Cor 2:4); yet he restrained the expression of his feelings, and wrote with a dignity and holy calm which he thought most calculated to win back his erring children. It gives a vivid picture of the early church... It entirely dissipates the dream that the apostolic church was in an exceptional condition of holiness of life or purity of doctrine."

The author of the Easton's article concludes, "Many Christians today still find this letter to speak to modern-day problems within church communities."

Online translations of First Epistle to the Corinthians: