The Epistle to the Hebrews is one of the books in the New Testament. Its author is not known.

The primary purpose of the Letter to the Hebrews is to exhort Christians to persevere in the face of persecution. The central thought of the entire Epistle is the doctrine of the Person of Christ and his role as mediator between God and humanity.

No author is internally named. Since the earliest days of the Church, the authorship has been debated. In the 4th century, Jerome and Augustine of Hippo supported Paul's authorship: the Church largely agreed to include Hebrews as the fourteenth letter of Paul, and affirmed this authorship until the Reformation. However, many scholars now believe that the author was one of Paul's pupils or associates, citing stylistic differences between Hebrews and the other Pauline epistles.[1] A fuller discussion is in the article Authorship of the Epistle to the Hebrews, and this summary is not elaborated below.

The epistle opens with an exaltation of Jesus as "the radiance of God's glory, the express image of his being, and upholding all things by his powerful word."[1:3] The epistle presents Jesus with the titles "pioneer" or "forerunner," "Son" and "Son of God," "priest" and "high priest."[2] It has been described as an "intricate" New Testament book.[3]

The epistle casts Jesus as both exalted Son and high priest, a unique dual Christology.[4] Scholars argue over where Hebrews fits in the 1st century world. Despite numerous publications on this epistle, scholarly discussion has failed to yield a definitive consensus on most issues. One author says conclusions on most questions, including the one concerning authorship, should be avoided.[5]

The text is internally anonymous. New Testament and Second Temple Judaism scholar Eric Mason argues that the conceptual background of the priestly Christology of the Epistle to the Hebrews closely parallels presentations of the messianic priest and Melchizedek in the Qumran.[2] While not enough is known about Hebrews or its background, its dependence on any early Jewish tradition cannot be proved. In both Hebrews and Qumran a priestly figure is discussed in the context of a Davidic figure; in both cases a divine decree appoints the priests to their eschatological duty; both priestly figures offer an eschatological sacrifice of atonement. Although the author of Hebrews was not directly influenced by Qumran's "Messiah of Aaron,"[6] these and other conceptions did provide "a precedent... to conceive Jesus similarly as a priest making atonement and eternal intercession in the heavenly sanctuary."[2]:p.199

Hebrews was written to a specific audience facing very specific circumstances. We can discern various facts about the recipients of Hebrews through a careful mirror reading of the letter:

Traditional scholars have argued the letter's audience was Jewish Christians, as early as the end of the 2nd century (hence its title, "The Epistle to the Hebrews"). Other scholars have suggested that Hebrews is part of an internal New Testament debate between the extreme Judaizers (who argued that non-Jews must convert to Judaism before they can receive the Holy Spirit of Jesus' Jewish covenant) versus the extreme Antinomians (who argued that Jews must reject God's commandments and that Jewish law was no longer in effect). James and Paul represent the moderates of each faction, respectively, and Peter served as moderator.[8] The Epistle emphasizes that non-Jewish followers of Jesus do not need to convert to Judaism to share in all of God's promises to Jews. Liberal American theologian Edgar Goodspeed notes, "But the writer's Judaism is not actual and objective, but literary and academic, manifestly gained from the reading of the Septuagint Greek version of the Jewish scriptures, and his polished Greek style would be a strange vehicle for a message to Aramaic-speaking Jews or Christians of Jewish blood." The debate continues to the present day.

Hebrews is often erroneously named as one of the general (or catholic) epistles. But since it was written to a specific group of Jewish-Christians, it is not technically a general epistle.

The use of tabernacle terminology in Hebrews has been used to date the epistle before the destruction of the temple, the idea being that knowing about the destruction of both Jerusalem and the temple would have influenced the development of his overall argument to include such evidence. Therefore, the most probable date for its composition is the second half of the year 63 or the beginning of 64, according to the Catholic Encyclopedia.[1] Another argument in favor of an early dating is that the author seems unfamiliar with the Eucharist ritual (had the author been familiar, it would have served as a great example).[9]

Most scholars today believe the document was written to prevent apostasy.[10] Some have interpreted apostasy to mean a number of different things, such as a group of Christians in one sect leaving for another more conservative sect, one of which the author disapproves. Some have seen apostasy as a move from the Christian assembly to pagan ritual. In light of a possibly Jewish-Christian audience, the apostasy in this sense may be in regard to Jewish-Christians leaving the Christian assembly to return to the synagogue. The epistle dissuades non-Jewish Christians from feeling a need to convert to Judaism. The author writes, "Let us hold fast to our confession."[4:14]

The book could be argued to affirm special creation. It affirms that God by His Son, Jesus Christ, made the worlds. "God...hath in these last days spoken unto us by his Son...by whom also he made the worlds."[1:1-2] The epistle also states that the worlds themselves do not provide the evidence of how God formed them. "Through faith we understand that the worlds were framed by the Word of God, so that things which are seen were not made of things which do appear."[11:3] 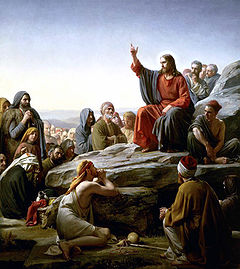 Christians believe that Jesus is the mediator of the New Covenant.[8:6] His famous sermon from a hill representing Mount Zion is considered by many Christian scholars to be the antitype[11] of the proclamation of the Old Covenant by Moses from Mount Sinai.

...the Epistle opens with the solemn announcement of the superiority of the New Testament Revelation by the Son over Old Testament Revelation by the prophets.[Heb. 1:1-4] It then proves and explains from the Scriptures the superiority of this New Covenant over the Old by the comparison of the Son with the angels as mediators of the Old Covenant,[1:5-2:18] with Moses and Joshua as the founders of the Old Covenant,[3:1-4:16] and finally, by opposing the high-priesthood of Christ after the order of Melchisedech to the Levitical priesthood after the order of Aaron.[5:1-10:18][1]

Hebrews is a very consciously "literary" document. The purity of its Greek was noted by Clement of Alexandria, according to Eusebius (Historia Eccl., VI, xiv), and Origen of Alexandria asserted that every competent judge must recognize a great difference between this epistle and those of Paul (Eusebius, VI, xxv).

Hebrews does not fit the form of a traditional Hellenistic epistle, lacking a proper prescript. Modern scholars generally believe this book was originally a sermon or homily, although possibly modified after it was delivered to include the travel plans, greetings and closing.[13:20-25] [13]

Hebrews contains many references to the Old Testament—specifically to its Septuagint text.

From The Interpreters Bible 1955

“We may sum up our author’s Christology negatively by saying that he has nothing to do with the older Hebrew messianic hopes of a coming Son of David, who would be a divinely empowered human leader to bring in the kingdom of God on earth; and that while he still employs the figure of a militant, apocalyptic king ... who will come again..., this is not of the essence of his thought about Christ.

“Positively, our author presents Christ as divine in nature, and solves any possible objection to a divine being who participates in human experience, especially in the experience of death, by the priestly analogy. He seems quite unconscious of the logical difficulties of his position proceeding from the assumption that Christ is both divine and human, at least human in experience although hardly in nature.” TIB XI p. 588[14]

Online translations of the Epistle to the Hebrews: