The Clausius theorem (1855) states that in a cyclic process 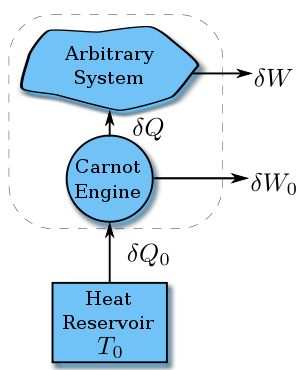 Suppose a system absorbs heat δQ at temperature T. Since the value of

does not depend on the details of how the heat is transferred, we can assume it is from a Carnot engine, which in turn absorbs heat δQ0 from a heat reservoir with constant temperature T0.

According to the nature of Carnot cycle,

Therefore in one cycle, the total heat absorbed from the reservoir is

Since after a cycle, the system and the Carnot engine as a whole return to its initial status, the difference of the internal energy is zero. Thus according to First Law of Thermodynamics,

According to the Kelvin statement of Second Law of thermodynamics, we cannot drain heat from one reservoir and convert them entirely into work without making any other changes, so

Combine all the above and we get Clausius inequality

If the system is reversible, then reverse its path and do the experiment again we can get