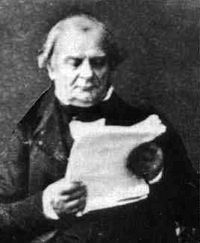 Benoît Paul Émile Clapeyron (26 February 1799 – 28 January 1864) was a French engineer and physicist, one of the founders of thermodynamics.

Born in Paris, Clapeyron studied at the École polytechnique and the École des Mines, before leaving for Saint Petersburg in 1820 to teach at the École des Travaux Publics. He returned to Paris only after the Revolution of July 1830, supervising the construction of the first railway line connecting Paris to Versailles and Saint-Germain. He married Mélanie Bazaine, daughter of Pierre-Dominique Bazaine (mathematician and bridge and canal engineer), and older sister of Pierre-Dominique (Adolphe) Bazaine (railway engineer) and Francois Achille Bazaine (Marshal of France).

In 1834, he made his first contribution to the creation of modern thermodynamics by publishing a report entitled the Driving force of the heat (Puissance motrice de la chaleur), in which it developed the work of the physicist Nicolas Léonard Sadi Carnot, deceased two years before. Though Carnot had developed a compelling analysis of a generalised heat engine, he had employed the clumsy and already unfashionable caloric theory.

Clapeyron, in his memoire, presented Carnot's work in a more accessible and analytic graphical form, showing the Carnot cycle as a closed curve on an indicator diagram, a chart of pressure against volume (named in his honor Clapeyron's graph).

In 1843, Clapeyron further developed the idea of a reversible process, already suggested by Carnot and made a definitive statement of Carnot's principle, what is now known as the second law of thermodynamics.

These foundations enabled him to make substantive extensions of Clausius' work, including the formula, now known as the Clausius–Clapeyron relation, which characterises the phase transition between two phases of matter. He further considered questions of phase transitions in what later became known as Stefan problems.

Clapeyron also worked on the characterisation of perfect gases, the equilibrium of homogeneous solids, and calculations of the statics of continuous beams, notably the theorem of three moments[1] (Clapeyron's theorem).