In general an engine converts energy to mechanical work. Heat engines distinguish themselves from other types of engines by the fact that their efficiency is fundamentally limited by Carnot's theorem.[3] Although this efficiency limitation can be a drawback, an advantage of heat engines is that most forms of energy can be easily converted to heat by processes like exothermic reactions (such as combustion), absorption of light or energetic particles, friction, dissipation and resistance. Since the heat source that supplies thermal energy to the engine can thus be powered by virtually any kind of energy, heat engines are very versatile and have a wide range of applicability. 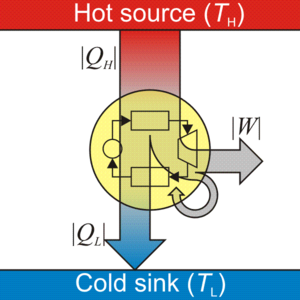 In thermodynamics, heat engines are often modeled using a standard engineering model such as the Otto cycle. The theoretical model can be refined and augmented with actual data from an operating engine, using tools such as an indicator diagram. Since very few actual implementations of heat engines exactly match their underlying thermodynamic cycles, one could say that a thermodynamic cycle is an ideal case of a mechanical engine. In any case, fully understanding an engine and its efficiency requires gaining a good understanding of the (possibly simplified or idealized) theoretical model, the practical nuances of an actual mechanical engine, and the discrepancies between the two.

All of these processes gain their efficiency (or lack thereof) due to the temperature drop across them.

Heat engines can be characterized by their specific power, which is typically given in kilowatts per litre of engine displacement (in the U.S. also horsepower per cubic inch). The result offers an approximation of the peak-power output of an engine. This is not to be confused with fuel efficiency, since high-efficiency often requires a lean fuel-air ratio, and thus lower power density. A modern high-performance car engine makes in excess of 75 kW/L (1.65 hp/in³).

Examples of everyday heat engines include the steam engine, the diesel engine, and the gasoline (petrol) engine in an automobile. A common toy that is also a heat engine is a drinking bird. Also the stirling engine is a heat engine. All of these familiar heat engines are powered by the expansion of heated gases. The general surroundings are the heat sink, providing relatively cool gases which, when heated, expand rapidly to drive the mechanical motion of the engine.

It is important to note that although some cycles have a typical combustion location (internal or external), they often can be implemented with the other. For example, John Ericsson developed an external heated engine running on a cycle very much like the earlier Diesel cycle. In addition, the externally heated engines can often be implemented in open or closed cycles.

What this boils down to is that there are thermodynamic cycles and a large number of ways to implement them.

In these cycles and engines, the working fluids are gases and liquids. The engine converts the working fluid from a gas to a liquid, from liquid to gas, or both, generating work from the fluid expansion or compression.

In these cycles and engines the working fluid is always a gas (i.e., there is no phase change):

In these cycles and engines the working fluid are always like liquid:

A domestic refrigerator is an example of a heat pump: a heat engine in reverse. Work is used to create a heat differential. Many cycles can run in reverse to move heat from the cold side to the hot side, making the cold side cooler and the hot side hotter. Internal combustion engine versions of these cycles are, by their nature, not reversible.

The Barton evaporation engine is a heat engine based on a cycle producing power and cooled moist air from the evaporation of water into hot dry air.

Mesoscopic heat engines are nanoscale devices that may serve the goal of processing heat fluxes and perform useful work at small scales. Potential applications include e.g. electric cooling devices. In such mesoscopic heat engines, work per cycle of operation fluctuates due to thermal noise. There is exact equality that relates average of exponents of work performed by any heat engine and the heat transfer from the hotter heat bath [6] . This relation transforms the Carnot's inequality into exact equality.

The efficiency of a heat engine relates how much useful work is output for a given amount of heat energy input.

From the laws of thermodynamics:

dW = − PdV is the work extracted from the engine. (It is negative since work is done by the engine.)
dQh = ThdSh is the heat energy taken from the high temperature system. (It is negative since heat is extracted from the source, hence ( − dQh) is positive.)
dQc = TcdSc is the heat energy delivered to the cold temperature system. (It is positive since heat is added to the sink.)

In general, the efficiency of a given heat transfer process (whether it be a refrigerator, a heat pump or an engine) is defined informally by the ratio of "what you get out" to "what you put in."

In the case of an engine, one desires to extract work and puts in a heat transfer.

The theoretical maximum efficiency of any heat engine depends only on the temperatures it operates between. This efficiency is usually derived using an ideal imaginary heat engine such as the Carnot heat engine, although other engines using different cycles can also attain maximum efficiency. Mathematically, this is because in reversible processes, the change in entropy of the cold reservoir is the negative of that of the hot reservoir (i.e., dSc = − dSh), keeping the overall change of entropy zero. Thus:

where Th is the absolute temperature of the hot source and Tc that of the cold sink, usually measured in kelvin. Note that dSc is positive while dSh is negative; in any reversible work-extracting process, entropy is overall not increased, but rather is moved from a hot (high-entropy) system to a cold (low-entropy one), decreasing the entropy of the heat source and increasing that of the heat sink.

The reasoning behind this being the maximal efficiency goes as follows. It is first assumed that if a more efficient heat engine than a Carnot engine is possible, then it could be driven in reverse as a heat pump. Mathematical analysis can be used to show that this assumed combination would result in a net decrease in entropy. Since, by the second law of thermodynamics, this is statistically improbable to the point of exclusion, the Carnot efficiency is a theoretical upper bound on the reliable efficiency of any process.

Empirically, no engine has ever been shown to run at a greater efficiency than a Carnot cycle heat engine.

The most Carnot efficiency as a criterion of heat engine performance is the fact that by its nature, any maximally efficient Carnot cycle must operate at an infinitesimal temperature gradient. This is because any transfer of heat between two bodies at differing temperatures is irreversible, and therefore the Carnot efficiency expression only applies in the infinitesimal limit. The major problem with that is that the object of most heat engines is to output some sort of power, and infinitesimal power is usually not what is being sought.

A different measure of ideal heat engine efficiency is given by considerations of endoreversible thermodynamics, where the cycle is identical to the Carnot cycle except in that the two processes of heat transfer are not reversible (Callen 1985):

This model does a better job of predicting how well real-world heat engines can do (Callen 1985, see also endoreversible thermodynamics):

As shown, the endoreversible efficiency much more closely models the observed data.

Heat engines have been known since antiquity but were only made into useful devices at the time of the industrial revolution in the eighteenth century. They continue to be developed today.

Engineers have studied the various heat engine cycles extensively in an effort to improve the amount of usable work they could extract from a given power source. The Carnot Cycle limit cannot be reached with any gas-based cycle, but engineers have worked out at least two ways to possibly go around that limit, and one way to get better efficiency without bending any rules.

Each process is one of the following: