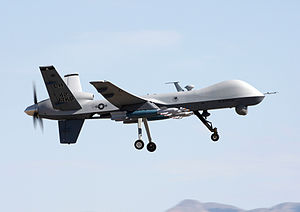 A MQ-9 Reaper during a training mission

An unmanned combat air vehicle (UCAV) or combat drone is an unmanned aerial vehicle (UAV) that is designed to deliver weapons (attack targets) without an onboard pilot. Currently operational UCAVs are under real-time human control, but future version may enable autonomous operation, for example with pre-programmed route and target details. Cruise missiles are usually considered weapons rather than armed aircraft, as they are destroyed on impact.

The elimination of the need for an onboard human crew in a combat aircraft that may be shot down over enemy territory has obvious advantages for personnel safety. In addition, much equipment necessary for a human pilot (such as the cockpit, flight controls, oxygen and ejection seat) can be omitted from an unmanned vehicle, resulting in a decrease in weight possibly allowing greater payloads, range and maneuverability.

One of the earliest exploration of the concept of UCAV was by Dr. Lee De Forest an early inventor of radio devices and who had a PH.D in radio technology and U.A. Sanabria an TV engineer. They presented their idea in an article in a 1940 publication.[1] In the 1980s, Iran used a simple UAV capable of holding six RPG-7 rounds in combat in the Iran-Iraq War. This was the world's first combat application of an UCAV.[2]

For countries with armed drones under development, see the list in the section "Concepts" below.

Most countries are bound to international laws of war (such as the Geneva Conventions). These laws govern the conduct of participants in war (and also defines combatants). These laws place a burden upon participants to limit collateral damage through proper identification of targets and distinction between combatants and non-combatants. The use of completely autonomous weapon systems is problematic, however, because of the difficulty in assigning accountability to a person. Therefore, current designs still incorporate an element of human control (a "man in the loop") – meaning that a ground controller must authorize weapons release.

Concerns also include the human controller's role, because if he is a civilian and not a member of the military (which is quite possible with developmental and highly sophisticated weapons systems) he would be considered a combatant under international law which carries a distinct set of responsibilities and consequences. It is for this reason that the "man in the loop" should ideally be a member of the military that understands and accepts his role as combatant.[4]

On 28 October 2009, United Nations Special Rapporteur on extrajudicial, summary or arbitrary executions, Philip Alston, presented a report to the Third Committee (social, humanitarian and cultural) of the General Assembly arguing that the use of unmanned combat air vehicles for targeted killings should be regarded as a breach of international law unless the United States can demonstrate appropriate precautions and accountability mechanisms are in place.[5] 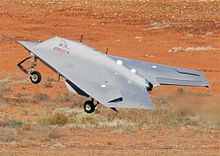 A BAE Raven during flight testing 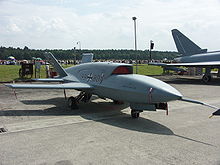 The EADS Barracuda on the Manching Air Base in Germany

Note: Some of these are not aircraft prototypes but technology demonstrators (TD) that are not expected to enter service. 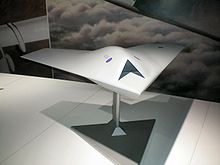 BAE Taranis model one of the most advanced designs of all of the concepts
Main article: BAE Taranis

Taranis is a British demonstrator programme for unmanned combat air vehicle (UCAV) technology. It is part of the UK's Strategic Unmanned Air Vehicle (Experimental) programme (SUAV[E]). BAE describes Taranis's role in this context as following: "This £124m four year programme is part of the UK Government’s Strategic Unmanned Air Vehicle Experiment (SUAVE) and will result in a UCAV demonstrator with fully integrated autonomous systems and low observable features." The Taranis demonstrator will have an MTOW of about 8000 kilograms and be of a similar size to the BAE Hawk- making it one of the world's largest UAVs – that will be stealthy, fast and be able to deploy a range of munitions over a number of targets and be able to defend itself against manned and other unmanned enemy aircraft. The first steel was cut in September 2007 and ground testing started in early 2009. The first flight of the Taranis is planned for the first quarter of 2012. The demonstrator will have two internal weapons bays. With the inclusion of "full autonomy" the intention is thus for this platform to be able to "think for itself" for a large part of the mission,Taranis will be one of the most advanced UCAV'S available.

Joint Unmanned Combat Air Systems, or J-UCAS, was the name for the joint U.S. Navy/U.S. Air Force unmanned combat air vehicle procurement project. J-UCAS was managed by the Defense Advanced Research Projects Agency. In the 2006 Quadrennial Defense Review, the J-UCAS program was terminated.[7] The program was revitalized into UCAS-D.[8] It would have used stealth technologies and carry precision-guided weapons such as the Joint Direct Attack Munition (JDAM) or precision miniature munitions, such as the Small-Diameter Bomb to suppress enemy air defenses.

Controllers could have used real-time data sources, including satellites, to plan for and respond to changes on and around the battlefield.

UCAS-D and Northrop Grumman X-47B are the U.S. Navy-only successors to the J-UCAS, which was cancelled in 2006. Boeing is also working on the X-45N in this sector.

In a New Year 2011 editorial titled "China's Naval Ambitions," The New York Times said "[t]he Pentagon must accelerate efforts to make American naval forces in Asia less vulnerable to Chinese missile threats by giving them the means to project their deterrent power from further offshore. Cutting back purchases of the Navy’s DDG-1000 destroyer (with its deficient missile defense system) was a first step. A bigger one would be to reduce the Navy’s reliance on short-range manned strike aircraft like the F-18 and the F-35, in favor of the carrier-launched N-UCAS ...."[9]

On 6 January 2011, the DOD announced that this would be one area of additional investment in the 2012 budget request.[10]

The United States Air Force has shifted its UCAV program from medium-range tactical strike aircraft to long-range strategic bombers.[7] The technology of the Long Range Strike program is based on the Lockheed Martin Polecat demonstrator. 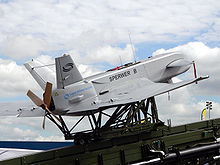 Sagem Sperwer B (not weaponized on this photo)
Main article: SAGEM Sperwer

The Sagem Sperwer B is a long endurance tactical UAV. The Sperwer can carry two Rafael-made Spike LR missiles for 12 hours (can be extended to 20) with a range of 200 km.[citation needed] All ground facilities of the Sperwer SDT (used by France, Netherlands, Sweden, Greece, Canada and Denmark) are compatible with the Sperwer B.

The Israeli Air Force, which operates a squadron of Hermes 450s out of Palmachim Airbase south of Tel Aviv, has adapted the Hermes 450 for use as an assault UAV, reportedly equipping it with two Hellfire missiles or, according to various sources, two Rafael-made missiles. According to Israeli, Palestinian, Lebanese and independent reports, the Israeli assault UAV has seen extensive service in the Gaza Strip and was used intensively in the Second Lebanon War. Israel has not denied this capability, but to date, its policy has been not to officially confirm it either.

The LMAMS is a man carried missile with many UAV characteristics such as loitering time and a hand-held ground station.[11][12]