Cockpit
This article is about the flight deck of an aircraft. For other uses, see Cockpit (disambiguation).

A cockpit or flight deck is the area, usually near the front of an aircraft, from which a pilot controls the aircraft. Most modern cockpits are enclosed, except on some small aircraft, and cockpits on large airliners are also physically separated from the cabin. From the cockpit an aircraft is controlled on the ground and in the air.

Cockpit as a term for the pilot's compartment in an aircraft first appeared in 1914. From about 1935 cockpit also came to be used informally to refer to the driver's seat of a car, especially a high performance one, and this is official terminology in Formula One. The term is most likely related to the sailing term for the coxswain's station in a Royal Navy ship, and later the location of the ship's rudder controls.[citation needed]

Cockpit of the Antonov An-124 of Polet Airlines.

Airbus A380 cockpit. Most Airbus cockpits are computerised glass cockpits featuring fly-by-wire technology. The control column has been replaced with an electronic sidestick. 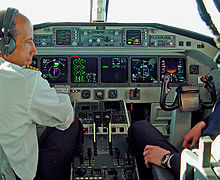 The cockpit of an aircraft contains flight instruments on an instrument panel, and the controls which enable the pilot to fly the aircraft. In most airliners, a door separates the cockpit from the passenger compartment. After the September 11, 2001 terrorist attacks, all major airlines fortified the cockpit against access by hijackers.

On an airliner, the cockpit is usually referred to as the flight deck. This term derives from its use by the RAF for the separate, upper platform where the pilot and co-pilot sat in large flying boats.

The first airplane with an enclosed cabin appeared in 1912 on the Avro Type F however during the early 1920s there were many passenger aircraft in which the crew remained open to the air while the passengers sat in a cabin. Military biplanes and the first single-engined fighters and attack aircraft also had open cockpits, some as late as the Second World War when enclosed cockpits became the norm.

The largest impediment to having closed cabins was the material the windows were to be made of. Prior to Perspex becoming available in 1933, windows were either safety glass, which was heavy, or cellulose nitrate (ie: guncotton) which yellowed quickly and was extremely flamable. In the mid 1920s many aircraft manufactuers began using enclosed cockpits for the first time. Early airplanes with closed cockpits include the 1924 Fokker tri-motor, the 1926 German Junkers W.34 transport, the 1926 Ford Tri-Motor, the 1927 Lockheed Vega, the Spirit of St. Louis and the passenger aircraft manufactured by the Douglas and Boeing companies during the mid-1930s. Open-cockpit airplanes were almost extinct by the mid-1950s, with the exception of training planes and crop-dusters. A pilot can be seen on the flight deck of this Continental Airlines Boeing 777-200 as it taxis to the take off point at London Heathrow Airport, England.

In most cockpits the pilot's control column or joystick is located centrally (centre stick), although in some military fast jets and in some commercial airliners the pilot uses a side-stick (usually located on the outboard side and/or at the left).

The layout of the cockpit, especially in the military fast jet, has undergone standardisation, both within and between aircraft different manufacturers and even different nations. One of the most important developments was the “Basic Six” pattern, later the “Basic T”, developed from 1937 onwards by the Royal Air Force, designed to optimise pilot instrument scanning.

Ergonomics and human factors concerns are important in the design of modern cockpits. The layout and function of cockpit displays controls are designed to increase pilot situation awareness without causing information overload. In the past, many cockpits, especially in fighter aircraft, limited the size of the pilots that could fit into them. Now, cockpits are being designed to accommodate from the 1st percentile female physical size and the 99th percentile male size.

In the design of the cockpit in a military fast jet, the traditional “knobs and dials“ associated with the cockpit are mainly absent. Instrument panels are now almost wholly replaced by electronic displays which are themselves often re-configurable to save space. While some hard-wired dedicated switches must still be used for reasons of integrity and safety, many traditional controls are replaced by multi-function re-configurable controls or so-called “soft keys”. Controls are incorporated onto the stick and throttle to enable the pilot to maintain a head-up and eyes-out position – the so-called Hands On Throttle And Stick or HOTAS concept,. These controls may be then further augmented by new control media such as head pointing with a Helmet Mounted Sighting System or Direct Voice Input (DVI). New advances in auditory displays even allow for Direct Voice Output of aircraft status information and for the spatial localisation of warning sounds for improved monitoring of aircraft systems.

The layout of control panels in modern airliners has become largely unified across the industry. The majority of the systems-related controls (such as electrical, fuel, hydraulics and pressurization) for example, are usually located in the ceiling on an overhead panel. Radios are generally placed on a panel between the pilot's seats known as the pedestal. Automatic flight controls such as the autopilot are usually placed just below the windscreen and above the main instrument panel on the glareshield. A central concept in the design of the cockpit is the Design Eye Position or "DEP", from which point all displays should be visible.

Most modern cockpit will also include some kind of integrated warning system.

USAF and IAF airmen work inside the cockpit of an IAF Ilyushin Il-76.

A Mode Control Panel, usually a long narrow panel located centrally in front of the pilot, may be used to control Heading(HDG), Speed(SPD), Altitude(ALT), Vertical Speed(V/S), Vertical Navigation(VNAV) and Lateral Navigation(LNAV). It may also be used to engage or disengage both the autopilot and the autothrottle. The panel as an area is usually referred to as the "glareshield panel". MCP is a Boeing designation (that has been informally adopted as a generic name for the unit/panel) for a unit that allows for the selection and parameter setting of the different Autoflight functions, the same unit on an Airbus aircraft is referred to as the FCU (Flight Control unit).

The Primary Flight Display will usually be located in a prominent position, either centrally or on on either side of the cockpit. It will in most cases include a digitized presentation of the attitude indicator, air speed and altitude indicators (usually as a tape display) and the vertical speed indicator. It will in many cases include some form of heading indicator and ILS/VOR deviation indicators. In many cases an indicator of the engaged and armed autofight system modes will be present along with some form of indication of the selected values for altitude, speed, vertical speed and heading. It may be pilot selectable to swap with the ND.

A Navigation Display, which may be adjacent to the PFD, shows the current route and information on the next waypoint, current wind speed and wind direction. It may be pilot selectable to swap with the PFD. The Engine Indication and Crew Alerting System (used for Boeing) or Electronic Centralized Aircraft Monitor (for Airbus) will allow the pilot to monitor the following information: values for N1, N2 and N3, fuel temperature, fuel flow, the electrical system, cockpit or cabin temperature and pressure, control surfaces and so on. The pilot may select display of information by means of button press.

The Flight Management System/Control Unit may be used by the pilot to enter and check for the following information: Flight Plan, Speed Control, Navigation Control, and so on.

In a less prominent part of the cockpit, in case of failure of the other instruments, there will be a set of back-up instruments, showing basic flight information such as Speed, Attitude, Heading, and aircraft attitude.

Aircraft designs have adopted the fully digital “glass cockpit.” In such designs, instruments and gauges, including navigational map displays, use a user interface markup language known as ARINC 661. This standard defines the interface between an independent cockpit display system, generally produced by a single manufacturer, and the avionics equipment and user applications which it is required to support, by means of displays and controls, often made by different manufacturers. The separation between the overall display system, and the applications driving it, allows for considerable specialization and independence.