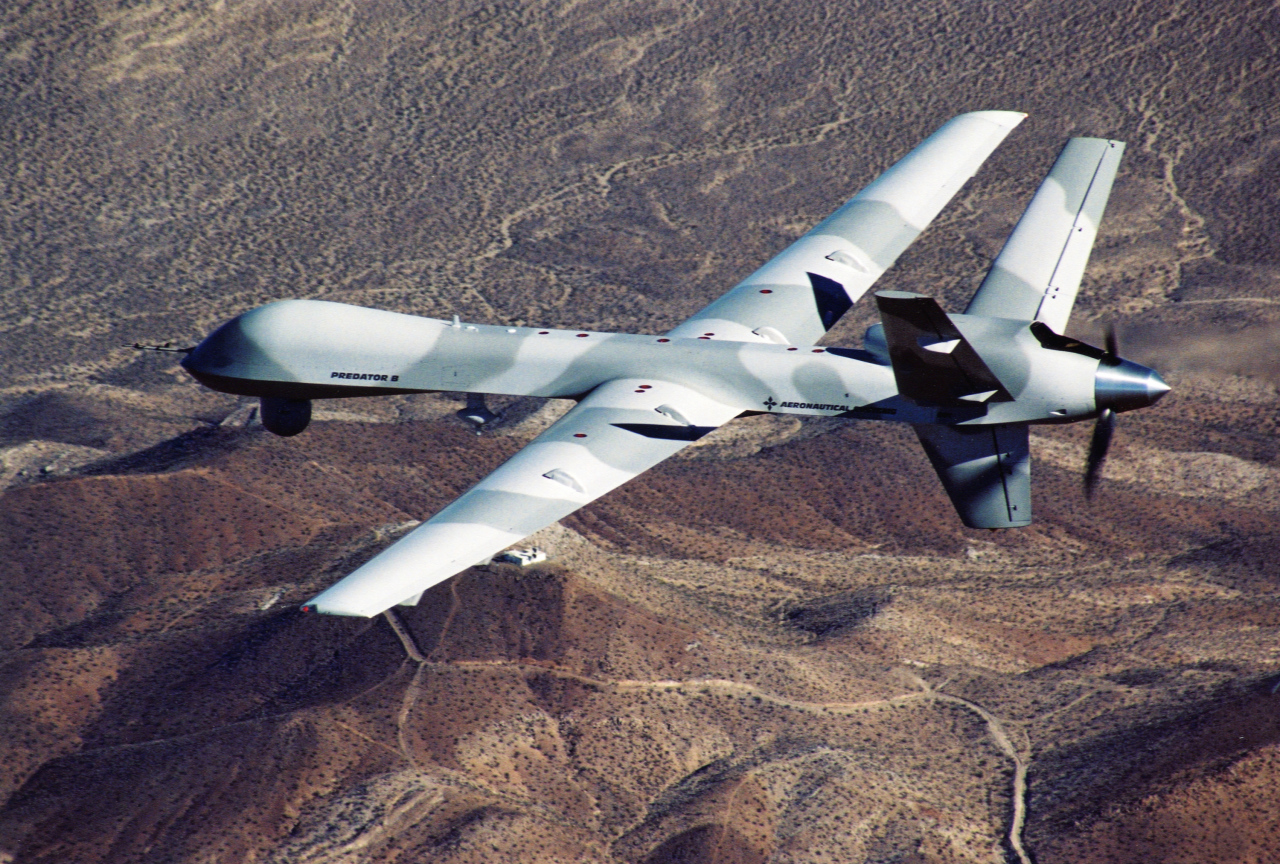 The MQ-9 Reaper (originally the RQ-9 Predator B) is an (UAV) developed by for use by the , the , and the British . The MQ-9 is the first hunter-killer UAV designed for long-endurance, high-altitude surveillance.

The MQ-9 is a larger and more capable aircraft than the earlier . It can use MQ-1's ground systems. The MQ-9 has a 950-shaft-horsepower engine, far more powerful than the Predator's convert|119|hp|abbr=on piston engine. The increase in power allows the Reaper to carry 15 times more ordnance and cruise at three times the speed of the MQ-1.

With the success of the MQ-1 in combat, General Atomics anticipated the Air Force's desire for an upgraded aircraft, and using its own funds, set about redesigning Predator.

GA refined the design, taking it in two separate directions. The first was with a jet-powered version. The "Predator B-002" was fitted with a -2A engine with 10.2 kN (2,300 lbf, 1,040 kgf) thrust. It had payload capacity of 475 pounds (215 kilograms), a ceiling of 60,000 feet (18.3 kilometers) and endurance of 12 hours. The U.S. Air Force has reportedly ordered two airframes for evaluation (delivery scheduled for 2007), and in at least one source this version is referred to as the RQ-1 Predator C. [ [http://www.airforce-technology.com/projects/predator/ Air Force Technology.com article "Predator RQ-1 / MQ-1 / MQ-9 Reaper - Unmanned Aerial Vehicle (UAV), USA"] ]

In October 2001, the US Air Force signed a contract with GA to purchase an initial pair of Predator B-003s for evaluation, with follow-up orders for production machines. The first test MQ-9s were delivered to the Air Force in 2002. The name "Altair" did not follow the aircraft into testing, with the Air Force continuing to refer to the system as "Predator B" until it was renamed Reaper ("Altair" instead became the designation for the unarmed NASA version); this is confusing, however, as the manufacturer uses the term to refer to the smaller B-001 prototype.

The Air Force believes that the Predator B will give the service an improved "deadly persistence" capability, with the UAV flying over a combat area night and day waiting for a target to present itself. In this role an armed UAV neatly complements piloted strike aircraft. A piloted strike aircraft can be used to drop larger quantities of ordnance on a target while a cheaper UAV can be kept in operation almost continuously, with ground controllers working in shifts, carrying a lighter ordnance load to destroy targets.

On , the (FAA) issued a certificate of authorization that allows the MQ-1 and MQ-9 aircraft to fly in U.S. civilian airspace to search for survivors of disasters. Requests had been made in 2005 for the aircraft to be used in search and rescue operations following , but because there was no FAA authorization in place at the time, the assets were not used. [SSgt Amy Robinson, [http://www.af.mil/news/story.asp?storyID=123024467 "FAA Authorizes Predators to seek survivors"] , Air Combat Command Public Affairs, , .]

On , the Associated Press reported that the MQ-9 would deploy into Iraq somewhere between the fall of that year or the spring of the next. Also mentioned was the building of a convert|400000|sqft|m2|sing=on expansion of the concrete ramp area used for Predator drones at Balad, the biggest U.S. air base in Iraq, presumably for the staging of Reapers. [ [http://www.foxnews.com/story/0,2933,289380,00.html FOXNews.com - Pilotless Robot Bomber Squadron Heads for Afghanistan, Iraq - Science News | Science & Technology | Technology News ] ]

On the "" reported an MQ-9 had achieved its first "kill", firing a Hellfire missile against "Afghanistan insurgents in the Deh Rawood region of the mountainous Oruzgan province. The strike was 'successful'," the said. [ [http://www.airforcetimes.com/news/2007/10/airforce_mq9_reaper_071029w/ "Reaper scores insurgent kill in Afghanistan"] , "", . Accessed .]

Critics have stated that the USAF's insistence on qualified pilots flying UAVs is a bottleneck to expanding their deployment. Air Force Major General stated on , , "For the way we fly them right now"—fully integrated into air operations and often flying missions alongside manned aircraft—"we want pilots to fly them." [Waterman, Shaun, " [http://www.washingtontimes.com/news/2008/aug/05/bigger-deadlier-reaper-drone-deployed-in-iraq/ Bigger, Deadlier Reaper Drone Deployed In Iraq] ", "", , , Pg. 17.]

General Atomics designed a naval version of the Reaper, named the "Mariner", for the U.S. Navy's (BAMS) program requirements. The design would have an increased fuel capacity in order to have an endurance of up to 49 hours.

NASA had initially expressed some interest in a production version of the B-002 turbofan-powered variant, but instead has leased an unarmed version of the Reaper, which carries the GA-ASI company name "Altair". Altair is one of the first 3 "Predator-B" airframes. The other 2 airframes, known as "Predator-B 001" and "Predator-B 002", had a maximum gross weight of 7,500 pounds. Altair differs from these models in that it has an convert|86|ft|m|sing=on long wingspan (20 feet greater than early and current MQ-9's). The Altair has enhanced avionics systems to better enable it to to fly in FAA-controlled civil airspace and demonstrate "over-the-horizon" command and control capability from a ground station. These aircraft are used by NASA's Earth Science Enterprise as part of the to perform on-location science missions. [ [http://www.nasa.gov/centers/dryden/news/FactSheets/FS-020-DFRC.html NASA ERAST Fact Sheet] ]

In November 2006, NASA's obtained an MQ-9 from Inc.. The aircraft has been named "Ikhana" and its main goal is the Suborbital Science Program within the Science Mission Directorate. NASA also acquired a ground control station in a mobile trailer. [ [http://www.nasa.gov/centers/dryden/news/FactSheets/FS-097-DFRC.html NASA - Ikhana Unmanned Science and Research Aircraft System ] ] This aircraft was used extensively to survey the Southern California wildfires in 2007. The data was used to deploy firefighters to areas of the highest need.

The initially ordered one Predator B for border patrol duty, referred to as MQ-9 CBP-101. It began operations , , but on , , this aircraft crashed in the desert. The determined (Record Identification: CHI06MA121

The CBP-101 was equipped with the Lynx SAR, AX-15 payload, ARC-210 radios, and other sensors and communications equipment; CBP-104 was enhanced with Ku band satellite command and control link and MTS-A EO/IR sensors.

In September 2006, the General Atomics Mariner demonstrator aircraft was operated by the Australian (DSTO) in an exercise designed to evaluate the aircraft's ability to aid in efforts to stem illegal fishing, drug running and illegal immigration. The Mariner operated from bases Edinburgh, South Australia and Learmonth, Western Australia in conjunction with a , the Joint Offshore Protection Command and the . [ [http://www.defense-update.com/news/ausi-uav-906.htm Defense Update article "Australia Tests Maritime Surveillance UAV"] ]

On , the U.S. Congress was notified by the that the United Kingdom was seeking to purchase a pair of MQ-9 Reapers. They will be operated by .

On , the Ministry of Defence announced that it was forced to destroy one of the Reapers operating in Afghanistan to prevent sensitive material falling into the hands of the after it crash landed. [cite web | title = RAF destroys £10m spy plane | url=http://www.telegraph.co.uk/news/main.jhtml?xml=/news/2008/04/22/nafghan222.xml | accessdate = 2008-04-22]

Germany has made a request to purchase five Reapers and four ground control stations, plus related support material and training. The request, being made through the process, was presented to Congress through the Defense Security Cooperation Agency on , and is valued at US$205 million.

On August 1, 2008, Italy submitted a FMS request through the for four aircraft, four ground stations and five years of maintenance support, all valued at US$330 million.

* The California Office of Emergency Services requested NASA support for the , and in under 24 hours the General Atomics Altair (NASA variant of the Predator B) was launched on a 16 hour mission to map the perimeter of the fire. The Altair had just returned from a test mission a day before the started. The fire mapping research is a joint project with NASA and the US Forest Service. [http://ic.arc.nasa.gov/story.php?id=388&sec=] [ [http://www.nasa.gov/centers/dryden/news/NewsReleases/2006/06-45.html NASA - NASA Supports UAS Fire Mapping Efforts on California Fire ] ]
* On , an MQ-9 operated by crashed near . The pilot, remotely operating the vehicle from Sierra Vista Municipal Airport, reported a momentary lockup of the displays on the primary control console. The pilot switched control to a secondary console, and in doing so inadvertently shut down the vehicle's engine, causing it to descend out of reach of communications and ultimately crash. [http://www.ntsb.gov/ntsb/GenPDF.asp?id=CHI06MA121&rpt=fa]
* On , the of the was activated to operate MQ-9 Reaper as well as MQ-1 Predator UAVs at , . The pilots are expected to fly combat mission in Iraq and Afghanistan in the summer of 2007. [cite news| title = Air Force stands up first unmanned aircraft systems wing | url =http://www.af.mil/news/story.asp?id=123051728 | author = Ryan Whitney | publisher = 99th Air Base Wing Public Affairs |date=2007-05-03]

* As of October 2007 the USAF is flying Operational missions in Afghanistan. As of , , according to USAF Lieutenant General Gary North, the Reaper has attacked 16 targets in Afghanistan using 500-lb bombs and Hellfire missiles. On the Reaper dropped a bomb on a truck carrying an insurgent mortar and team near . [Brook, Tom Vanden, "Air Force Requests More Fighter Drones", "", , p. 6.]

"Several minor variations of the RQ-9/MQ-9 exist; these values are indicative."

* Up to 14x air to ground missiles can be carried or four Hellfire missiles and two convert|500|lb|kg|abbr=on laser-guided bombs. The ability to carry the in the future is also possible, as well as the AIM 9X, Air to Air missile.

*"This article contains material that originally came from the web article [http://www.vectorsite.net/twuav.html "Unmanned Aerial Vehicles"] by Greg Goebel, which exists in the Public Domain."