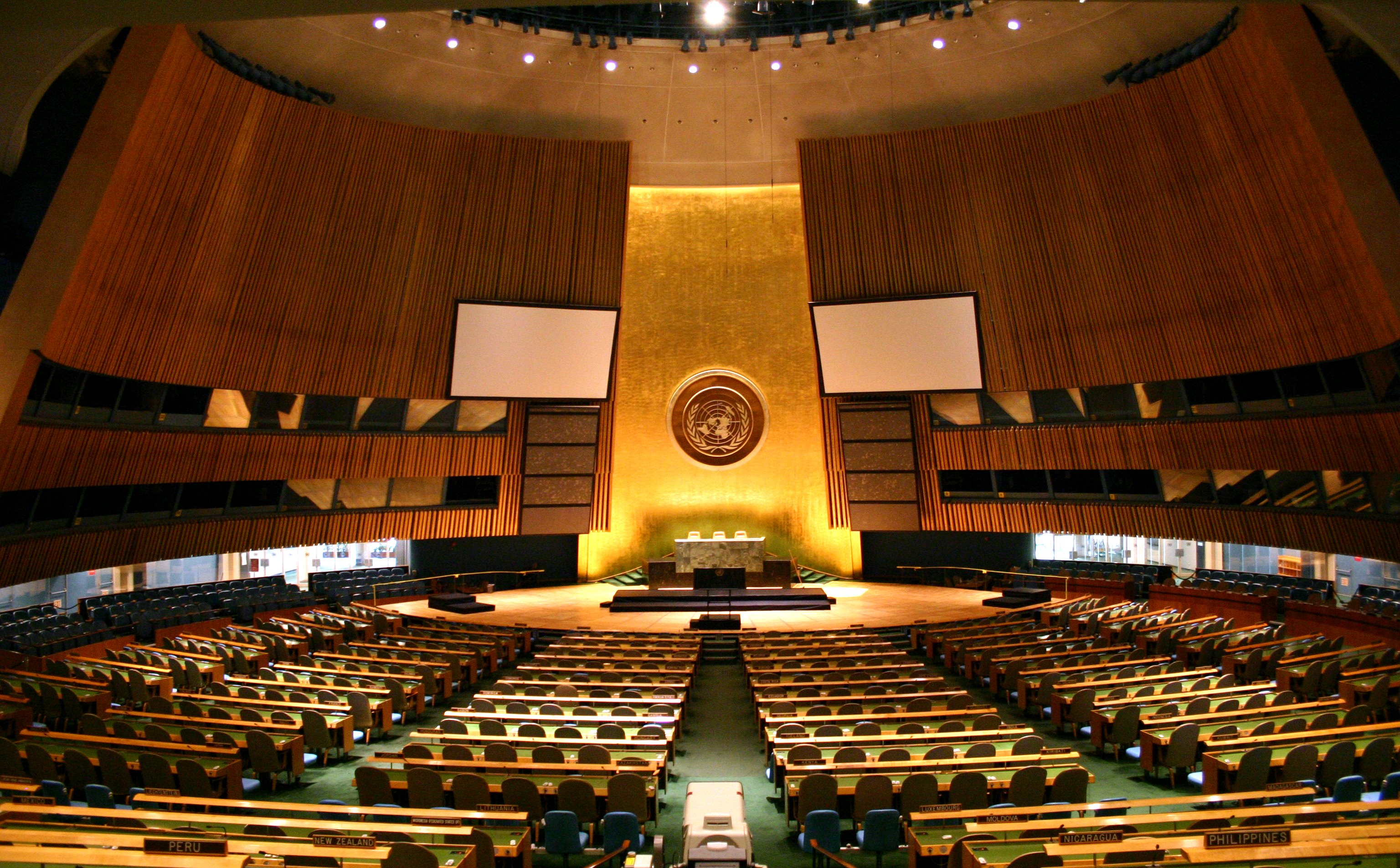 The United Nations General Assembly (UNGA / GA) is one of the five principal organs of the United Nations and the only one in which all member nations have equal representation. Its powers are to oversee the budget of the , appoint the non-permanent members to the , receive reports from other parts of the and make recommendations in the form of . [ [http://www.un.org/aboutun/charter/chapter4.htm CHARTER OF THE UNITED NATIONS: Chapter IV] . UN.org.] It has also established a wide number of . [ [http://www.un.org/ga/subsidiary/ General Assembly: Subsidiary organs] . UN.org.]

The General Assembly meets under its president or secretary general in regular yearly sessions which last from September to December, although it can reconvene for special and emergency special sessions. Its composition, functions, powers, voting, and procedures are set out in .

The first session was convened on 10 January 1946 in the in and included representatives of 51 nations.

Voting in the General Assembly on important questions – recommendations on peace and security; election of members to organs; admission, suspension, and expulsion of members; budgetary matters – is by a two-thirds majority of those present and voting. Other questions are decided by majority vote. Each member country has one vote. Apart from approval of budgetary matters, including adoption of a scale of assessment, Assembly resolutions are not binding on the members. The Assembly may make recommendations on any matters within the scope of the UN, except matters of peace and security under Security Council consideration. The power structure theoretically allows states comprising just eight percent of the world population to pass a resolution by a two-thirds vote.

The agenda for each session is planned up to seven months in advance and begins with the release of a preliminary list of items to be included in the provisional agenda. [cite web|url=http://www.un.org/Depts/dhl/resguide/gasess.htm#gaagen|title=Research Guide: General Assembly|publisher=caitlinUnited Nations] This is refined into a provisional agenda sixty days before the opening of the session. After the session begins the final agenda is adopted in a plenary meeting which allocates the work to the various Main Committees who later submit reports back to the Assembly for adoption by consensus or by vote.Items on the agenda are numbered. Several items may be discussed in a single plenary session. Also, discussions on a topic of the agenda can continue across separate meetings months apart.

From the First to the Thirtieth General Assembly sessions, all General Assembly resolutions were numbered consecutively, with the resolution number followed by the session number in Roman numbers (for example, Resolution 1514 (XV), which was the 1514th numbered resolution adopted by the Assembly, and was adopted at the Fifteenth Regular Session (1960)). Beginning with the Thirty-First Session, resolutions are numbered by individual session (for example Resolution 41/10 represents the 10th resolution adopted at the Forty-First Session).

At the first Special Session of the UN General Assembly held in 1947, , then president of the Special Session, began a tradition that has remained until today whereby the first speaker at this major international forum is always a Brazilian. [cite web|url=http://www.mre.gov.br/index.php?option=com_content&task=view&id=1714&Itemid=1259|title=Historical Personalities and Diplomats: Oswaldo Aranha|publisher=Brazilian Ministry of External Relations]

The "" resolution, adopted 3 November 1950, empowered the Assembly to convene in emergency special session in order to recommend collective measuresndash including the use of armed forcendash in the event of a breach of the peace or act of aggression. As with all Assembly resolutions, two-thirds of UN Members 'present and voting' must approve any such recommendation before it can be formally adopted by the Assembly. Emergency special sessions have been convened under this procedure on ten occasions. The two most recent, in 1982 and 1997 through 2003 respectively, have both been convened in response to actions by the State of Israel. The ninth considered the situation in the occupied Arab territories following Israel's unilateral extension of its laws, jurisdiction, and administration to the Golan Heights. The tenth was triggered by the Israeli occupation of , and dealt with the issue of Palestine.

The main committees are ordinally numbered, 1-6:

The roles of many of the main committees have changed over time. Until the late 1970s, the First Committee was the Political and Security Committee (POLISEC) and there was also a sufficient number of additional "Political" matters that an additional, unnumbered main committee, called the Special Political Committee, also sat. The Fourth Committee formerly handled Trusteeship and Decolonization matters. With the decreasing number of such matters to be addressed as the attained independence and the movement progressed, the functions of the Special Political Committee were merged into the Fourth Committee during the 1990s.

Each main committee consists of all the members of the General Assembly. Each elects a chairman, three vice chairmen, and a rapporteur at the outset of each regular General Assembly session.

These are not numbered. According to the [http://www.un.org/ga/61/background/committees.shtml General Assembly website] , the most important are:
*Credentials Committeendash This committee is charged with ensuring that the diplomatic credentials of all UN representatives are in order. The Credentials Committee consists of nine Member States elected early in each regular General Assembly session.
*General Committeendash This is supervisory committee entrusted with ensuring that the whole meeting of the Assembly goes smoothly. The General Committee consists of the president and vice presidents of the current General Assembly session and the chairman of each of the six Main Committees.

Other committees of the General Assembly are enumerated in [http://www.un.org/ga/committees.shtml this list] .

There are seven commissions:

Despite its name, the former (UNCHR) was actually a subsidiary body of ECOSOC.

There are [http://www.un.org/ga/subsidary.shtml six boards] .

Councils and panelsThe most important (as well as the newest) council is the , which replaced the aforementioned UNCHR in March 2006.

There are a total of [http://www.un.org/ga/councils.shtml four councils and one panel] .

Working Groups and other

There is a [http://www.un.org/ga/other.shtml varied group of working groups and other subsidiary bodies] .

On 21 March 2005, Secretary-General presented a report, "In Larger Freedom", that criticized the General Assembly for focusing so much on consensus that it was passing watered-down resolutions reflecting "the lowest common denominator of widely different opinions". He also criticized the Assembly for trying to address too broad an agenda, instead of focusing on "the major substantive issues of the day, such as international migration and the long-debated comprehensive convention on ". Annan recommended streamlining the General Assembly's agenda, committee structure, and procedures; strengthening the role and authority of its president; enhancing the role of ; and establishing a mechanism to review the decisions of its committees, in order to minimize s and of the . Annan reminded UN members of their responsibility to implement reforms, if they expect to realize improvements in UN effectiveness. [cite web|url=http://www.un.org/largerfreedom/chap5.htm|title=In Larger Freedom, Chapter 5|publisher=United Nations]

A United Nations Parliamentary Assembly, or United Nations People's Assembly (UNPA), is a proposed addition to the United Nations System that eventually could allow for direct election of UN parliament members by citizens all over the world.