The Dong-Feng 21 (DF-21; NATO reporting name CSS-5 - Dong-Feng (simplified Chinese: 东风; traditional Chinese: 東風; pinyin: Dōngfēng; literally "East Wind")) is a two-stage, solid-propellant, single-warhead medium-range ballistic missile (MRBM) developed by China Changfeng Mechanics and Electronics Technology Academy. Development started in the late 1960s and was completed around 1985-86, but it was not deployed until 1991. It was developed from the submarine-launched JL-1 missile, and is China's first solid-fuel land-based missile. The U.S. Department of Defense estimates that China has 60-80 missiles and 60 launchers.[7]

Originally developed as a strategic weapon, the DF-21's later variants were designed for both nuclear and conventional missions. As well as a nuclear warhead of around 300kt, it is thought that high explosive, submunition and chemical warheads are available. The latest DF-21D was said to be the world's first anti-ship ballistic missile (ASBM). The DF-21 has also been developed into a space-capable anti-satellite/anti-missile weapon carrier.

The DF-21A was operational by 1996 and has improved accuracy with an estimated circular error probable (CEP) of 100~300m, with both GPS and a radar-based terminal guidance system in a redesigned nose. It is thought to have a lower yield, around 90kt, but longer range (up to 2700 km).[8]

Revealed in 2006, DF-21C is believed to be a mod of DF-21. Its actual designation is unknown; it may be a version of the DF-25 missile. Its maximum range is believed to be about 1,700 kilometres (1,100 mi). The accuracy of DF-21C is comparable to a cruise missile. The new GPS-based guidance system has reduced the missile’s CEP to 30~40m, enabling it for precision-strike missions.[8] 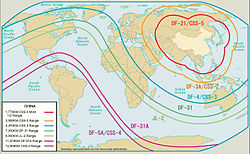 The US Department of Defense has stated that China has developed and reached initial operating capability [10] of a conventionally-armed[11] high hypersonic[1] land-based anti-ship ballistic missile (ASBM) based on the DF-21. This would be the world's first ASBM and the world's first weapons system capable of targeting a moving aircraft carrier strike group from long-range, land-based mobile launchers.[12][13] [14] These would combine maneuverable reentry vehicles (MaRVs) with some kind of terminal guidance system. Such a missile may have been tested in 2005-6, and the launch of the Jianbing-5/YaoGan-1 and Jianbing-6/YaoGan-2 satellites would give the Chinese targeting information from SAR (Synthetic Aperture Radar) and visual imaging respectively. The upgrades would greatly enhance China's ability to conduct sea-denial operations to prevent US carriers from intervening in the Taiwan Strait.[15] A professor at the U.S. Naval War College says that carrier-killing missiles underscore that the U.S. can no longer assume naval supremacy as it has since the end of World War II.[16]

China has recently launched a series of satellites to support its ASBM efforts:[citation needed]

DF-21D on the highway

It is rumored that there are other versions of KT under development, but these claims have yet to be verified.