Lower Sorbian (Dolnoserbski) is a Slavic minority language spoken in eastern Germany in the historical province of Lower Lusatia, today part of Brandenburg. It is one of the two literary Sorbian languages, the other being Upper Sorbian.

Lower Sorbian is spoken in and around the city of Cottbus in Brandenburg. Signs in this region are usually bilingual, and Cottbus has a Gymnasium where the language of instruction is Lower Sorbian. 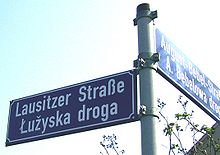 The phonology of Lower Sorbian has been greatly influenced by contact with German, especially in Cottbus and larger towns. For example, German-influenced pronunciation tends to have a voiced uvular fricative [ʁ] instead of the alveolar trill [r], and a "clear" [l] that is not especially palatalized instead of [lʲ]. In villages and rural areas German influence is less marked, and the pronunciation is more "typically Slavic".

The consonant phonemes of Lower Sorbian are as follows:

Lower Sorbian has both final devoicing and regressive voicing assimilation:

The postalveolar fricative /ʃ/ is assimilated to [ɕ] before /t͡ɕ/:

The vowel phonemes are as follows:

Stress in Lower Sorbian normally falls on the first syllable of the word:

In loanwords, stress may fall on any of the last three syllables: