New Jersey Institute of Technology (NJIT) is a public research university[3] in Newark, New Jersey. It is often also referred to as Newark College of Engineering (which was the official name of the university between 1919–1975).

NJIT is New Jersey's science and technology university. The school opened as the Newark Technical School in 1881 with 88 students. As of 2010, there are 8,840 students of which more than 1,450 live in one of the school's four dormitories. It is now home to the Newark College of Engineering, College of Architecture and Design, School of Management, Albert Dorman Honors College, College of Science and Liberal Arts, and College of Computing Sciences. The recently resigned president, Robert A. Altenkirch, was inaugurated on May 2, 2003. He succeeded Saul K. Fenster, who was named the university’s sixth president in 1978. On September 28, 2011, NJIT Trustees named Joel Bloom interim president.

The school offers the only NAAB-accredited bachelor's degree in architecture in New Jersey.

It also offers combined programs in medicine with the University of Medicine and Dentistry of New Jersey and St. George's University in Grenada.

The university is known foremost for its research capabilities ranging from the fields of stem cell research to nanotechnology to solar physics and polymer science. The school also specializes in the research of smart gun technology, and has trademarked the term Virtual Classroom and was the first to obtain then retain Yahoo!'s "Most Wired University" award.

NJIT is a participating Internet2 member and held its first Internet2 Day in 2005.

NJIT is a member of the Association of Public and Land-Grant Universities (see APLU members) which is the oldest higher education association in America.

The New Jersey Institute of Technology that we know today has a rich history with its beginnings developing from the industrial age. Like many of the port cities around the world, the Newark, New Jersey, of the late 19th century was a thriving industrial center. Its factories churned out thread, metals, paints and leather goods. In Newark, Thomas Edison set the stage at his Ward Street factory for his later astounding achievements, and Edison rival Edward Weston established the first factory in the United States for commercial production of dynamo electric machines.

At the height of this age of innovation, in 1881, an act of the New Jersey State Legislature essentially drew up a contest to determine which municipality would become home to the state's urgently needed technical school. The challenge was straightforward: the state would stake "at least $3,000 and not more than $5,000" and the municipality that matched the state's investment would earn the right to establish the new school.

The Newark Board of Trade, working jointly with the Newark City Council, launched a feverish campaign to win the new school. Dozens of the city's industrialists, along with other private citizens, eager for a work force resource in their home town, threw their support behind the fund-raiser. By 1884, the collaboration of the public and private sectors produced success. Newark Technical School was ready to open its doors.

The first 88 students, mostly evening students, attended classes in a rented building at 21 West Park Street. Soon the facility became inadequate to house an expanding student body. To meet the needs of the growing school, a second fund-raiser—the institution's first capital campaign—was launched to support the construction of a dedicated building for Newark Technical School. In 1886, under the leadership of the school's dynamic first director, Dr. Charles A. Colton, the cornerstone was laid at the intersection of High Street and Summit Place for the three-story building later to be named Weston Hall, in honor of the institution's early benefactor. A laboratory building, later to be called Colton Hall, was added to the campus in 1911.

Dr. Allan R. Cullimore led the institution from 1920 to 1949, transforming Newark Technical School into Newark College of Engineering. Campbell Hall was erected in 1925, but due to the Depression and World War II, only the former Newark Orphan Asylum, now Eberhardt Hall , was purchased and renovated by the college in the succeeding decades.

As of 1946, about 75% of the freshman class had served in the armed forces. Cullimore Hall was built in 1958 and two years later the old Weston Hall was razed and replaced with the current seven- story structure. Doctoral level programs were introduced and six years later, in 1966, an 18-acre (7.3 ha), four building expansion was completed.

In 1975, with the addition of the New Jersey School of Architecture, the institution had evolved into a technological university, emphasizing a broad range of graduate and undergraduate degrees and dedication to significant research and public service. While Newark College of Engineering remains, a new university name—New Jersey Institute of Technology—was chosen to represent the institution's expanded mission. 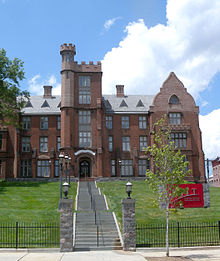 The establishment of a residential campus and the opening of NJIT's first dormitory (Redwood Hall) in 1979 began a period of steady growth that continues today under the 2005 Landscape Master Plan. Two new schools were established at the university during the 1980s, the College of Science and Liberal Arts in 1982 and the School of Industrial Management in 1988. The Albert Dorman Honors College was established in 1994, and the newest school, the College of Computing Sciences, was created in 2001. As of 2008 there are 4 residence halls on campus: Redwood Hall, Cypress Hall, Oak Hall, and Laurel Hall.

In 2003, the launch of the new Campus Center on the site of the former Hazell Hall centralized campus social events. Construction of a new Atrium, Bookstore, Information Desk, Dining Hall, computer lab, and new student organization offices continued into 2004. In 2005, a row of automobile chop shops adjacent to campus were demolished. In 2006, construction of a new off-campus residence hall by American Campus Communities commenced in the chop shops' prior location. The new hall which opened in 2007 is dubbed the University Centre.

Also in 2005, Eberhardt Hall was fully renovated and re-inaugurated as the Alumni Center and the symbolic front door to the university. Its restored tower was the logo of the former Newark College of Engineering and was designed by Kevin Boyajian and Scott Nelson. A rebranding campaign with the current slogan, "NJIT - New Jersey's Science and Technology University - The Edge in Knowledge", was launched to emphasize NJIT’s unique position as New Jersey's preeminent science-and-technology-focused research university.

In June 2010, NJIT officially completed its purchase of the old Central High School building[6] which sits in between NJIT and Rutgers-Newark campus. With the completion of the purchase, Summit Street (from Warren Street to New Street) would be totally converted into a pedestrian walkway from a public street. The existing old 'Central High School' building is earmarked to be extensively renovated, preserved and used as classrooms as per the Campus Master Plan[7] which includes tearing down of Kupfrian Hall to create more greenery.

The minimum SAT score (math + verbal only) for enrolling freshmen to the Accelerated BS/MD program (combined with University of Medicine and Dentistry of New Jersey) is 1400. [6]

Schools and Colleges within NJIT

Albert Dorman Honors College, NJIT’s Honors Institution was formed with an intention to help high achieving students perform to their full potential. Students in the Honors College have a chance to study and interact with other high achieving students as well as distinguished faculty members.[8] Honors college students are not only backed by academic performance, but also by athletics or co-curricular participation.[9] To join the Honors College, one must fulfill several minimum requirements starting with filling out the Honors application form available online at [13][10] The Honors essay is the most important part of the application, where there is a chance to explain things that your statistical records cannot manifest.[11] 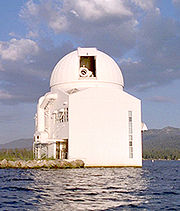 The university is known foremost for its research capabilities in many fields, especially nanotechnology, solar physics, polymer science, and the development of a smart gun technology [citation required]. The university research centers include the National Center for Transportation and Industrial Productivity and SmartCampus. The university hosts the Metro New York FIRST Robotics office. The university also hosts the Center for Solar-Terrestrial Research which owns and operates the Big Bear Solar Observatory, the world's largest solar observatory, located in Big Bear Lake, California, and operates the Owens Valley Solar Array, near Bishop, California.

In the past, NJIT was home to the Computerized Conferencing and Communications Center,(CCCC), a premier research center for furthering the state of the art in Computer-mediated communication. The systems that resulted from this research are the Electronic Information Exchange System (EIES), as well as the continuations: The Electronic Information Exchange System 2 (EIES2), and the Tailorable Electronic Information Exchange System (TEIES). One of the foremost developments of EIES was that of the Virtual Classroom (TM), a term coined by Dr. Starr Roxanne Hiltz. This was the first e-learning platform in the world, and was unique in that it evolved onto an existing communications system, rather than having a system created specifically for it. Their missions completed, the CCCC and EIES were terminated in the mid-90s.

The university currently operates a Class-10 cleanroom and a Class-1000 cleanroom on campus for academic and research purposes [12] including counter-bioterrorism research.[13]

The university also maintains an advanced 67-node supercomputer cluster in its Mathematics Department for research purposes. 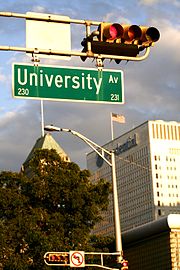 NJIT is located in the vibrant University Heights section of Newark. 'A campus gateway redevelopment plan' is expected to bring about a great transformation to the adjacent neighborhood in the next few years.

NJIT's sports teams are called the NJIT Highlanders. The school colors are red and white, with navy. NJIT's athletic teams compete in the NCAA Division I (full membership officially 1 September 2009[14]). The men's soccer team participates in the Atlantic Soccer Conference, the men's volleyball team plays in the Eastern Intercollegiate Volleyball Association (EIVA) conference while the rest of the teams are part of the all-sports Great West Conference. The club-level ice hockey team plays in the Great Northeast Collegiate Hockey Conference.

The sports available at NJIT are: