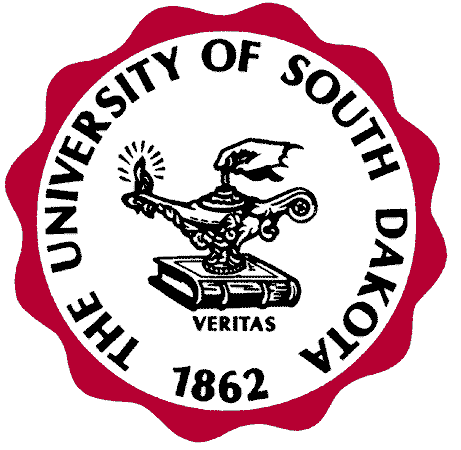 | motto = "Veritas"
established = 1862
type = Public
president=
city = Vermillion
state = SD
country = USA
undergrad = 9,243
postgrad = 2,339
staff= 400+
endowment = $134,291,804 [ [http://www.usd.edu/foundation/endowments/valueofendowments.cfm] , "USD Value of Endowment".]
campus = convert|216|acre|km2
free_label = Mascot
free = Coyotes
colors = █ and █
website= [http://www.usd.edu/ The University of South Dakota] The University of South Dakota, the state’s oldest university, was founded in 1862 and classes began in 1882. Located in , USD is home to South Dakota's only medical school and law school. USD is governed by the , and its current president is Jim Abbott. The university has been accredited by the North Central Association of College and Schools since 1913.

*The acronym "USD" is one of the most widely used titles of the school. (The also employs this acronym.)
*USD is often referred to as "the U" by students and locals alike.

The University of South Dakota was founded in 1862 by the Dakota Territorial Legislature. It is the state's oldest university. It is one of six universities governed by the South Dakota Board of Regents. USD has been accredited by the Higher Learning Commission of the North Central Association of Colleges and Schools since 1913 and is an active member of the Land Grant Colleges. The school houses the state's only law and medical schools and the lone College of Fine Arts.

USD is also home to the state's oldest, largest, and nationally prominent political science department. Within the program is the Farber Fund, named for storied university professor Dr. , which provides subsidy to political science and criminal justice majors to attend conferences, participate in study tours, complete internships, and study abroad.

The Sanford School of Medicine, a community-based program, emphasizes family medicine and primary care with the support and participation by practicing physicians and community hospitals throughout the state. Community hospitals and clinics provide teaching sites and the practicing physicians are teachers. The Lee Medical Sciences building houses the basic science education.

In 2007 FM was renamed as U. Radio, following the University of South Dakota's U. theme. The central on-campus headquarters for KAOR Radio is the Al Neuharth Media Center while the transmitter lies atop Slagle Hall on USD's campus.

"" has served as the campus newspaper since 1887. It is published every Wednesday morning during the school year. Managed entirely by students, "The Volante" prides itself as being editorially independent.

The paper has won numerous awards including a number of Best of Show and Pacemakers. In October 2006 it was awarded its 6th Pacemaker Award, sometimes referred to as the Pulitzer Prize of College Journalism, by the Associated Collegiate Press.

The paper includes news, sports, opinion and verve (arts and entertainment) sections. The paper also has a frequently updated website, which includes campus news, staff blogs and podcasts. "The Volante" generally maintains a staff of 50 students.

The school's mascot is the , and the school colors are vermillion red and white. USD competes at the NCAA level, and is a member of the for all sports. A majority of the sporting events at the University are held at the . The school's homecoming, typically held in early October, is known as Dakota Days.

The Coyotes had long shared a spirited intrastate rivalry with the , until 2004 when SDSU made the transition to Division I athletics. There has been widespread anticipation among fans of both schools of a potential revival of the rivalry now that the Coyote athletics have joined the D-1 ranks. While both schools indicated a desire to resume the rivalry, it may not be feasible until their respective athletic programs have finalized a partnership with a conference. On August 2, 2007, the school announced that it would be joining the along with North Dakota for the GWC's inaugural all-sports season in 2008. [http://deseretnews.com/article/1,5143,700241969,00.html New Great West Conference]

The University of South Dakota is based on a convert|216|acre|km2|sing=on campus situated along the bluffs near the Missouri River in the southeast corner of the state. The most prominent academic facility on campus, while simultaneously serving as one the school's symbols, is Old Main. Old Main was built in 1883, burned down in 1889, and ultimately restored in 1997. Along with several classrooms, it houses the Student Action Office, Honors Program, and Center for Academic Engagement. Farber Hall, a 190 seat theatre utilized mainly for speaking engagements, is also located within Old Main.

One of the newest additions to the campus is the Al Neuharth Media Center, named for the founder of "USA Today". Dedicated in September 2003, the Neuharth Center houses all of the news and media organizations on campus, including the ’s South Dakota operations, , the U’s Department of Contemporary Media and Journalism, the national headquarters of the Native American Journalists Association, campus newspaper "The Volante", campus radio station KAOR, and television station KYOT. Formerly the athletic armory, the building was converted into a media center through donations made by Al Neuharth, a 1950 USD graduate.

The serves not only as the home venue for the school's football, basketball, volleyball, and track and field teams, but also a recreational center for the student body. It is South Dakota's only domed football stadium, hosting the state's high school football championships in November. Currently, USD is in the process of constructing a new student union and business school.

* , prominent rhetorical theorist
*, U.S. Representative from Texas
*, longtime News anchorman and retired NBC Nightly News anchor
*, linebacker for
*, former director of the
*, retired Air Force colonel, ex-POW, and most highly decorated military officer since Douglas MacArthur.
*, , Governor of , , commissioner of the , and President of the
*, former governor and Representative of
*Tim Johnson, U.S. senator from
*, inventor of the and winner of 1939 , the chemical element 103 is named for him, participated in the
*, father of nuclear medicine and brother of Ernest O. Lawrence.
*, American pole vaulter for and Olympian
*, humanitarian and founder of the
*, former kicker
*, founder of "" and the , former CEO of .
*Pat O'Brien, television presenter
*, linebacker for
*, U.S. senator from
*, teacher and theorist