Although the league is officially affiliated to the United States Adult Soccer Association (USASA), and qualifies for the U.S. Open Cup through USASA channels, the league is generally considered to be at the fourth tier of competition in the United States soccer pyramid, behind Major League Soccer (MLS), the North American Soccer League (NASL) and the United Soccer Leagues Professional Division (USL Pro), and roughly equal with the USL Premier Development League.

The league's motto is "A National League With A Regional Focus". Some of the clubs are former United Soccer Leagues (USL) clubs.

The league expanded into the Midwest in 2005 with the addition of several new teams and a new conference, and changed its name to National Premier Soccer League to reflect its new national footprint; a team from the expansion conference - Detroit Arsenal - won the league in its first year after its eastward expansion. The NPSL expanded further in 2007 with the addition of a new Northeast Conference and five new teams from the eastern United States. The first team from the East to win the national NPSL title was the Pennsylvania Stoners in 2008. The league has since continued to expand, adding more teams throughout the entirety of the country.

Since its inception the league has managed to place at least one team actively playing under its banner into U.S. Open Cup competition. Though the showing of the NPSL in US Open Cup play was typically only one or two teams in its first six years, the 2009 and 2010 cups have seen four and three , respectively, NPSL teams in each tournament. The recent success of the NPSL in USASA qualifying has encouraged a movement by which the league could have automatic berths in the final tournament.[1] The furthest a team from the NPSL has reached in the US Open Cup during the professional era (1997 and onward after the entry of MLS teams) has been the third round. However, the Brooklyn Italians have won the US Open Cup outright before the existence of either MLS or the NPSL.

The Official Ball of the NPSL is Molten. The NPSL currently uses the FX-1000A FIFA Approved ball provided by Molten. They are in the second year of the sponsorship. 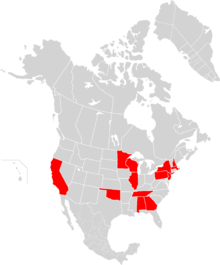 USA States with NPSL teams are highlighted in red.

*Note: FC Tulsa is not competing in league play in 2011, only the US Open Cup