The Lamar Hunt U.S. Open Cup is a knockout tournament in American soccer. The tournament is the oldest ongoing American soccer competition and is presently open to all United States Soccer Federation affiliated teams, from amateur adult club teams to the professional clubs of Major League Soccer.

The Open Cup was first held in 1913–14, when it was called the National Challenge Cup.

The defending Open Cup champions are Seattle Sounders FC, who beat the Chicago Fire 2-0 in the 2011 final. It was the Sounders' third Open Cup title, as well as their third consecutive title won. The last time a club won three consecutive Open Cups was the Greek American AA who won the 1967, 1968, and 1969 editions of the tournament. 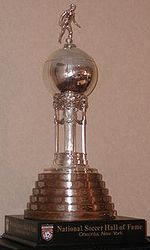 The competition dates back to 1914, when it was known as the National Challenge Cup. In 1999, U.S. Soccer honored one of American soccer's most important patrons, Lamar Hunt, by changing the official title of the tournament to the Lamar Hunt U.S. Open Cup. The winners of the tournament were awarded the Dewar Cup, donated by Sir Thomas Dewar for the promotion of soccer in America in 1912, until it was retired due to poor condition in 1979. It was brought back into use by the United States Adult Soccer Association in 1997, but is now back on permanent display at the National Soccer Hall of Fame in Oneonta, New York, and the recent winners of the tournament have been awarded a new, different trophy. Despite this, the name of each winning club is still added to the base of the original Dewar Cup. 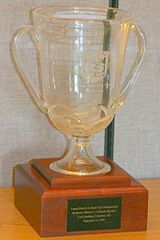 Trophy awarded to the Rochester Rhinos in 1999

The National Challenge Cup was the first truly national cup competition in the United States, as previous cups had been effectively relegated to regional status by the difficulties in coordination and travel caused by the size of the United States in the early 1900s. While U.S. Soccer had initially administered the competition, at some point they handed over management to the USASA. In 1995, U.S. Soccer resumed its administration of the competition.[1]

Maccabi Los Angeles of California and Bethlehem Steel of Pennsylvania have both won the cup a record five times, while Greek American AA of New York and Seattle Sounders FC are tied for the record for most consecutive cup victories at three. Most of these records are likely to fall over time, now that Major League Soccer offers a fully professional league, and its teams typically dominate the competition. The old NASL did not participate in the Open Cup.

Since MLS' debut in 1996, MLS clubs have won the cup in all but one of those years. The Rochester Rhinos of the 2nd division A-League were surprise winners in 1999, defeating four MLS clubs, including the Colorado Rapids 2-0 in the championship match. The first professional team to win in the modern era were the Richmond Kickers of the USISL (the predecessor to the A-League, USL First Division, and USL Pro) in 1995, one year before the start of MLS. D.C. United were the first MLS team to win in 1996.

Currently, eight teams from each level of the American Soccer Pyramid take part in the competition proper, with each league narrowing its delegation separately in the spring before the competition officially begins in the summer. In some cases, additional teams play in qualifying rounds to gain entry. One example is found with MLS clubs, as only the top six from the previous regular season get an automatic bid, while the bottom U.S.-based MLS teams face each other to qualify for the remaining two MLS slots.

Since 2008, the champion of the U.S. Open Cup has earned the right to play the CONCACAF Champions League.[2] The first team to represent the U.S. as Open Cup champion was 2007's winner, the New England Revolution.