The Jersey Express is a team in the Northeast Division of the Blue Conference (Eastern Conference) of the American Basketball Association based in East Orange, New Jersey. The team was formed in 2005 as the Newark Express. Marsha Blount (President) and Jacqueline Halyard (General Manager) are co-owners of the team. The team previously played at the gym at Essex County College in Newark, New Jersey and at Drew University. They are now playing their home games at the East Orange Campus High School gymnasium, marking the team's return to the Newark area.

The Express ended the regular season on March 5, 2006, after losing an away game to the Buffalo Rapids. Their record for the regular season was 14-16 and they finished third in the Roger Brown Division behind the Harlem Strong Dogs and the Strong Island Sound. They had a bye week for the first round of the playoffs. They played on March 17, 2006, in Atlanta against their second round opponent, the Atlanta Vision.

The Express started the season with star players Aswan Morris, Rasheed Sparks, Jamie Sowers and Derek Washington and Marcus Toney-El from the Jersey SkyCats. The Head Coach of the team in their first season was Darryl Dawkins. The assistant coach was Rick Nash. BOMBO Sports & Entertainment, LLC, the company who produced Still We Believe: The Boston Red Sox Movie and other films agreed to produce a film about the Newark Express and their African American female owners.[1] The Newark Express were first professional basketball team in the city of Newark, the city that was the birthplace of Shaquille O'Neal. Former Newark Mayor, Sharpe James, and the city council gave money to the team and became an official sponsor during their inaugural season. Sharpe James also showed up at some of the team's home games. 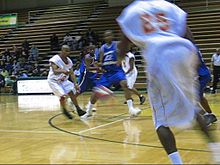 The Newark Express had a small number (100-250 fans on average) at their games, but there was more loyalty and noise among the fans toward the end of the season. Despite having a number of star players including Rob Thompson, Rasheed Sparks and Aswan Morris, no player from the Express made it to the ABA All Star game at the BankAtlantic Center in February. The team had mentioned the possibility of moving to a larger arena in the future. Although the Prudential Center was completed in 2007, the low attendance prevented the team from using the arena. Players during the season were: Rasheed Sparks, Shaheen Holloway, Marcus Tony-El, Aswan Morris, Dezmond Morgan, Rob Thompson, Amin Wright, Ike Williams, Derek Washington, Mufeed Thomas, Marcos Sanchez, Robert Cheeks, Jamie Sowers, Travis Snell, Khayri Battle, Andrew Feeley, Jimmy Luu, Dwayne Howell, Nick Valdez, Tim Gittens, Desmond Morgen and Reginald Tyler.

The Newark Express season ended with a loss against the top ranked Rochester Razorsharks 126-98 on March 19, 2006 in the second round of the playoffs. The Razorsharks went on to beat the Atlanta Vision, the San Jose Skyrockets and the SoCal Legends to win the 2005-2006 ABA Championship.

The Express hired Ron Moore, a Brooklyn native and former New York Knick to serve as head coach beginning in November 2006. Moore was named an All City player (NYC) in high school, All American in college and played for the Knicks, the Detroit Pistons and Phoenix Suns in his NBA career. Moore's coaching history began at Hunter College as an assistant coach and his first stint at head coach was from 1997-1999 with Concordia College[disambiguation needed

]. Moore also coached for the Long Island Surf and Westchester Kings (defunct teams of the USBL, Five Towns College and York College before coming to the Express.

At the end of November 2006, Ron Moore resigned from the Express and was replaced by co-owner Marsha Blount, who will serve as interim head coach.[2]

In August, the former Harlem Strong Dog, Obadiah Toppin, who was a 2005 All-Star, came to an open tryout for the Express. Sekani Francis, Jonathan Oliver, Brandon Weldon and Terrance Watkins are four players who the team said they expected to see a lot from at training camp. Another group of four players: Christopher Jean, Justin Carter, Telron Spell and Keimon Thompson were invited back for another workout.

Newark lost their home-opener against the Maryland Nighthawks by a score of 118-113 on Saturday, November 4, 2006. The Express bounced back at a home game on November 8 against the expansion team, the Richmond Ballerz, winning 103-94. The game went into double overtime, the second of which in the ABA means the score is reset and the first team to ten wins. Newark aggressively and quickly outscored Richmond in the second overtime by 11-2. At the end of regulation Newark was down by three with seven seconds left, but point guard Tayquan Goode shot a buzzer-beating three point shot to get the team in the first overtime period. This first period by ABA rules lasts three minutes and after that time the score was tied 92-92. Newark lost their third game of the season in Brooklyn to the expansion franchise, the Brooklyn Wonders. The game was played on November 11 and was close throughout the game, but Newark dropped to their second loss on the season by a score of 93-94. Newark lost their next seven games on the season falling to a record of 1-9. They beat the Montreal Matrix on December 22 in Montreal, but lost their next six games, four of which were on the road. Despite a 2-16 record at the end of January, eleven of Newark's losses were by less than ten points including four games lost by one point.[3]

The team announced they have changed their name to the Jersey Express and have relocated to Madison in Morris County.[4] They will now be playing at the Baldwin Gymnasium at Drew University.[5]