Superoxide dismutase
For other senses of the term SOD/Sod, see Sod (disambiguation).

Superoxide dismutases (SOD, EC 1.15.1.1) are a class of enzymes that catalyze the dismutation of superoxide into oxygen and hydrogen peroxide. As such, they are an important antioxidant defense in nearly all cells exposed to oxygen. One of the exceedingly rare exceptions is Lactobacillus plantarum and related lactobacilli, which use a different mechanism.

The SOD-catalysed dismutation of superoxide may be written with the following half-reactions :

In this reaction the oxidation state of the metal cation oscillates between n and n+1.

Discovered by Irwin Fridovich and Joe McCord, SOD enzymes were previously thought to be several metalloproteins with unknown function (for example, CuZnSOD was known as erythrocuprein).[2] Several common forms of SOD exist: they are proteins cofactored with copper and zinc, or manganese, iron, or nickel. For example, Brewer (1967) identified a protein that became known as superoxide dismutase as an indophenol oxidase by protein analysis of starch gels using the phenazine-tetrazolium technique.[3] 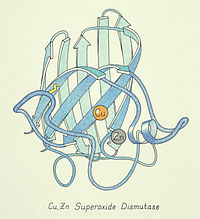 There are three major families of superoxide dismutase, depending on the metal cofactor: Cu/Zn (which binds both copper and zinc), Fe and Mn types (which bind either iron or manganese), and the Ni type, which binds nickel.

In humans (as in all other mammals and most chordates), three forms of superoxide dismutase are present. SOD1 is located in the cytoplasm, SOD2 in the mitochondria, and SOD3 is extracellular. The first is a dimer (consists of two units), whereas the others are tetramers (four subunits). SOD1 and SOD3 contain copper and zinc, whereas SOD2 has manganese in its reactive centre. The genes are located on chromosomes 21, 6, and 4, respectively (21q22.1, 6q25.3 and 4p15.3-p15.1).

In higher plants, superoxide dismutase enzymes (SODs) act as antioxidants and protect cellular components from being oxidized by reactive oxygen species (ROS).[15] ROS can form as a result of drought, injury, herbicides and pesticides, ozone, plant metabolic activity, nutrient deficiencies, photoinhibition, temperature above and below ground, toxic metals, and UV or gamma rays.[16][17] Specifically, molecular O2 is reduced to O2- (an ROS called superoxide) when it absorbs an excited electron released from compounds of the electron transport chain. Superoxide is known to denature enzymes, oxidize lipids, and fragment DNA.[16] SODs catalyze the production of O2 and H2O2 from superoxide (O2-), which results in less harmful reactants.

When acclimating to increased levels of oxidative stress, SOD concentrations typically increase with the degree of stress conditions. The compartmentalization of different forms of SOD throughout the plant makes them counteract stress very effectively. There are three well-known and studied classes of SOD metallic coenzymes that exist in plants. First, Fe SODs consist of two species, one homodimer (containing 1-2 g Fe) and one tetramer (containing 2-4 g Fe). They are thought to be the most ancient SOD metalloenzymes and are found within both prokaryotes and eukaryotes. Fe SODs are most abundantly localized inside plant chloroplasts, where are they are indigenous. Second, Mn SODs consist of a homodimer and homotetramer species each containing a single Mn(III) atom per subunit. They are predominantly found in mitochondrion and peroxisomes. Third, Cu-Zn SODs have electrical properties very different from the other two classes. These are concentrated in the chloroplast, cytosol, and in some cases the extracellular space. Note that Cu-Zn SODs provide less protection than Fe SODs when localized in the chloroplast.[15][16][17]

Simply stated, SOD outcompetes damaging reactions of superoxide, thus protecting the cell from superoxide toxicity. The reaction of superoxide with non-radicals is spin forbidden. In biological systems, this means its main reactions are with itself (dismutation) or with another biological radical such as nitric oxide (NO) or a metal. The superoxide anion radical (O2−) spontaneously dismutes to O2 and hydrogen peroxide (H2O2) quite rapidly (~105 M−1s−1 at pH 7). SOD is necessary because superoxide reacts with sensitive and critical cellular targets. For example, it reacts the NO radical, and makes toxic peroxynitrite. The dismutation rate is second order with respect to initial superoxide concentration. Thus, the half-life of superoxide, although very short at high concentrations (e.g., 0.05 seconds at 0.1mM) is actually quite long at low concentrations (e.g., 14 hours at 0.1 nM). In contrast, the reaction of superoxide with SOD is first order with respect to superoxide concentration. Moreover, superoxide dismutase has the largest kcat/KM (an approximation of catalytic efficiency) of any known enzyme (~7 x 109 M−1s−1),[19] this reaction being only limited by the frequency of collision between itself and superoxide. That is, the reaction rate is "diffusion limited". Even at the subnanomolar concentrations achieved by the high concentrations of SOD within cells, superoxide inactivates the citric acid cycle enzyme aconitase, can poison energy metabolism, and releases potentially toxic iron. Aconitase is one of several iron-sulfur containing (de)hydratases in metabolic pathways shown to be inactivated by superoxide.[20]

Superoxide is one of the main reactive oxygen species in the cell, and, as such, SOD serves a key antioxidant role. The physiological importance of SODs is illustrated by the severe pathologies evident in mice genetically engineered to lack these enzymes. Mice lacking SOD2 die several days after birth, amid massive oxidative stress.[21] Mice lacking SOD1 develop a wide range of pathologies, including hepatocellular carcinoma,[22] an acceleration of age-related muscle mass loss,[23] an earlier incidence of cataracts and a reduced lifespan. Mice lacking SOD3 do not show any obvious defects and exhibit a normal lifespan, though they are more sensitive to hyperoxic injury.[24] Knockout mice of any SOD enzyme are more sensitive to the lethal effects of superoxide generating drugs, such as paraquat and diquat.

Drosophila lacking SOD1 have a dramatically shortened lifespan, whereas flies lacking SOD2 die before birth. SOD knockdowns in C. elegans do not cause major physiological disruptions. Knockout or null mutations in SOD1 are highly detrimental to aerobic growth in the yeast Sacchormyces cerevisiae and result in a dramatic reduction in post-diauxic lifespan. SOD2 knockout or null mutations cause growth inhibition on respiratory carbon sources in addition to decreased post-diauxic lifespan.

Several prokaryotic SOD null mutants have been generated, including E. Coli. The loss of periplasmic CuZnSOD causes loss of virulence and might be an attractive target for new antibiotics.

Mutations in the first SOD enzyme (SOD1) can cause familial amyotrophic lateral sclerosis (ALS, a form of motor neuron disease).[25][26][27] The most common mutation in the U.S. is A4V, while the most intensely studied is G93A. The other two isoforms of SOD have not been linked to any human diseases, however, in mice inactivation of SOD2 causes perinatal lethality[21] and inactivation of SOD1 causes hepatocellular carcinoma.[22] Mutations in SOD1 can cause familial ALS, by a mechanism that is presently not understood, but not due to loss of enzymatic activity or a decrease in the conformational stability of the SOD1 protein. Overexpression of SOD1 has been linked to the neural disorders seen in Down syndrome.[28] Genetic polymorphisms in SOD enzymes and their altered expressions and activities are associated with oxidative DNA damage and subsequently the individual’s risk of cancer susceptibility.[29]

SOD has proved to be highly effective in treatment of colonic inflammation in experimental colitis. Treatment with SOD decreases reactive oxygen species generation and oxidative stress and, thus, inhibits endothelial activation and indicate that modulation of factors that govern adhesion molecule expression and leukocyte-endothelial interactions. Therefore, such as antioxidants may be important new therapies for the treatment of inflammatory bowel disease.[30]

In recent years it has become more apparent that in mice the extracellular superoxide dismutase (SOD3, ecSOD) is critical in the development of hypertension.[31][32] In other studies, diminished SOD3 activity was linked to lung diseases such as Acute Respiratory Distress Syndrome (ARDS) or Chronic obstructive pulmonary disease (COPD).[33] [34] [35]

Superoxide dismutase is also not expressed in neural crest cells in the developing fetus. Hence, high levels of free radicals can cause damage to them and induce dysraphic anomalies (neural tube defects).

SOD is used in cosmetic products to reduce free radical damage to skin, for example to reduce fibrosis following radiation for breast cancer. Studies of this kind must be regarded as tentative, however, as there were not adequate controls in the study including a lack of randomization, double-blinding, or placebo.[36] Superoxide dismutase is known to reverse fibrosis, perhaps through reversion of myofibroblasts back to fibroblasts.[37]