Marzahn is a locality within the borough of Marzahn-Hellersdorf in Berlin. Berlin's 2001 administrative reform led to the former boroughs of Marzahn and Hellersdorf fusing into a single new borough. In the north the Marzahn locality includes the neighbourhoods of Bürknersfelde and Ahrensfelde, an overbuilt strip of land which once had belonged to the Brandenburg municipality of Ahrensfelde and was incorporated into Berlin in 1990.

Marzahn is divided into 3 zones (Ortslagen): 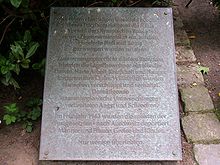 Inscription on a plate next to the memorial stone on the Marzahn cemetery: "On a former sewage field North of the cemetery, the Nazis set up a so called "Zigeunerrastplatz" (gypsies' resting place) in advance of the 1936 Olympic Games, on which hundreds of Sinti and Roma were forced to live. Crowded into dark shacks, the inhabitants of the camp survived with difficulty. Hard labour, sickness and hunger claimed their victims. At random people were abducted and arrested. Humiliating "racial hygiene" examinations spread fear and terror. In the spring of 1943 most of the "detained people" were deported to Auschwitz. Men and women, seniors and children. Only a few survived."

The historic village of Marzahn was first mentioned as Morczane in a 1300 deed by Margrave Albert III of Brandenburg-Salzwedel, when he granted the estates to the Friedland Cistercian abbey (in today's Neuhardenberg). After the Thirty Years' War it fell to Elector Frederick William of Brandenburg. The new village church was finished in 1871 according to plans by Friedrich August Stüler, another landmark is the Marzahn post mill, rebuilt in 1994. The village became part of Greater Berlin in 1920, as a locality of the Lichtenberg district.

Marzahn was the site of a labour camp (today a water treatment plant), where Roma were interned from July 16, 1936 on, two weeks prior to the 1936 Summer Olympics in Berlin, away from visitor's eyes. As a part of the Nazi Porajmos extermination policy, up to 2000 inmates remained there until in 1943 they were deported to Auschwitz-Birkenau, where most of them were gassed. In 1941 the large factory of the Carl Hasse & Wrede machine tool company (now Knorr-Bremse) was erected, where hundreds forced labourers were employed. The victims were buried at the nearby Parkfriedhof, a memorial marks the site. On April 21, 1945 the district of Marzahn was the first in Berlin to be conquered by the Red Army under General Nikolai Berzarin. The "first freed house" stands on Landsberger Allee.

A part of East Berlin from 1949, Marzahn remained a rural site until from 1977 vast housing estates were built on its fields by order of the East German authorities. The construction, carried out in the typical plattenbau style, dragged on until the late 1980s. In the course of the population growth Marzahn was separated from Lichtenberg in 1979 to become a borough in its own right and in 1986 the new Hellersdorf district (including Kaulsdorf and Mahlsdorf) was split from it.

In 1987 Marzahn hosted the Berliner Gartenschau a horticulture show on the occasion of Berlin's 750th anniversary. The area today called Erholungspark Marzahn includes the Gärten der Welt (Gardens of the World) project showing a Chinese, Japanese, Balinese and Korean, labyrinths modelled on Hampton Court Palace and Chartres Cathedral as well as a garden of the Italian Renaissance. After 1989, the Marzahn estate became known for neo-Nazis and "foreigners were warned not even to visit there".[1]

Marzahn is served by the S-Bahn lines S7 and S75 at the stations Springpfuhl, Poelchaustraße, Marzahn, Raoul-Wallenberg-Straße, Mehrower Allee and Ahrensfelde. Tramway connections to the inner city are provided by the M6 and M8 lines of the Berlin Straßenbahn.