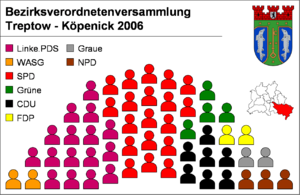 Treptow-Köpenick (pronounced [tʁɛptoː køːpɛnɪk], with a silent w) is the ninth borough of Berlin, Germany, formed in Berlin's 2001 administrative reform by merging the former boroughs of Treptow and Köpenick.

Among Berlin's boroughs it is the largest by area with the lowest population density. The Johannisthal Air Field lies between Johannisthal and Adlershof.

Treptow-Köpenick is divided into 15 localities: