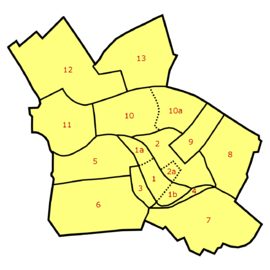 Mitte (German for "middle, centre", commonly used without an article) is a central locality (Ortsteil) of Berlin in the homonymous district (Bezirk) of Mitte. Until 2001 it was itself an autonomous district.

It comprises the historic centre of Alt-Berlin around the churches of St. Nicholas and St. Mary, the City Hall and numerous main tourist attractions of the city. For these reasons Mitte is considered the "heart" of Berlin.

Map of 1688
See also: Cölln and History of Berlin

The history of Mitte corresponds to the history of the entire city until the early 20th century, and with the Greater Berlin Act in 1920 it became the first district of the city. It was among the areas of the city most heavily damaged in World War II.

Following a territorial redeployment by the Soviet Union and the United Kingdom that reshaped the borders of West Berlin's British Sector in August 1945, the western part of Staaken became in effect as of 1 February 1951 an exclave of Mitte, then still a borough of East Berlin. This ended on January 1, 1961, when western Staaken was incorporated into then East German Falkensee, which had already been under its de facto administration since June 1, 1952.

Situated in central Berlin and mostly in its old town, it is traversed by the river Spree. It borders the localities of Tiergarten, Moabit, Wedding, Gesundbrunnen, Prenzlauer Berg (in Pankow district), Friedrichshain, and Kreuzberg (both in Friedrichshain-Kreuzberg district).

Mitte is subdivided into 13 zones or neighborhoods (Stadtviertel) (the numbers refer to the map above right): 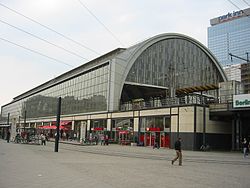