Moabit is an inner city locality of Berlin. Since Berlin's 2001 administrative reform it belongs to the newly regrouped governmental borough of Mitte. Previously, from 1920 to 2001, it belonged to the borough of Tiergarten. Moabit's borders are defined by three watercourses, the Spree, the Westhafen Canal and the Berlin-Spandau Navigation Canal. Colloquially, the name Moabit also refers to the Central Criminal Court (Strafgericht) and detention centre, which deals with all criminal cases in Berlin.

The origin of the name Moabit is disputed. Arguably it can be traced back to the first inhabitants of the area, the Huguenots, in the time of King Frederick William I of Prussia. These French refugees named their new residence by analogy to the Biblical description of the Israelites in the country of Moab, where they stayed before being allowed to enter Canaan. Other possible origins include the French "terre maudit"" (cursed land), the Slavic "moch" (moor) or a worn off pronunciation of the German (Berlin dialect) "Moorjebiet" (swamp area).

In the 13th century the waste area along the road to Spandau known as Große Stadtheide ("Great city Heath") was a hunting ground of the electors of Brandenburg. 1716 saw the formation of the colony of Old Moabit by the Huguenots, who were meant to cultivate White Mulberry trees for silkworms, but failed because of the low soil quality.

In 1818 New Moabit was founded and grew together with Old Moabit to an industrial suburb district, which was incorporated into the City of Berlin in 1861. The industrialization started in 1820 when, with the financial support of court counsellor Baillif, a simple bridge was built to connect the island to the Berlin mainland. The bridge was followed by factories, a power plant, the Berlin-Spandau Canal, the Westhafen port and the Hamburger Bahnhof train station. This resulted in an exponential growth of the population, facilitating the spreading of a smallpox epidemic.

In consequence, Berlin's city council, exhorted by Rudolf Virchow built a second hospital (after the Charité), the Krankenhaus Moabit in 1872. In the 1880s, Robert Koch worked here on the sterilization of surgical instruments and the isolation of the tuberculosis bacterium. A teaching hospital from 1920 on, the Krankenhaus Moabit employed notable physicians like the Nobel Laureate Werner Forssmann, Lydia Rabinowitsch-Kempner and the resistance fighter Georg Groscurth. The facility was finally closed in 2001. 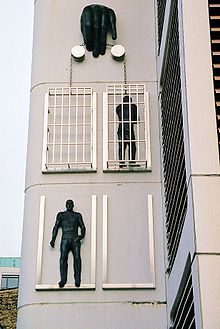 Facade of prison building in Moabit.

A first prison, the Zellengefängnis (Cell Prison) on Lehrter Straße was built between 1842 and 1849 by order of King Frederick William IV of Prussia according to the "separate system" of Pentonville Prison. In 1878 Max Hödel, who had shot at Emperor Wilhelm I of Germany, was beheaded here. Political activists like Karl Radek, Erich Mühsam and Musa Cälil were arrested in Moabit, Wilhelm Voigt, "Hauptmann von Köpenick" and the writer Wolfgang Borchert served their prison sentences in the prison.

On April 11, 1928, during the Weimar Republic, the prison was the scene of a daring jail-break which at the time made worldwide headlines. The 20-year old Communist activist Olga Benario and several of her comrades managed to break into the prison and free the incarcerated Otto "Li De" Braun, a prominent party member and at the time Benario's lover. Despite being hotly hunted, the two lovers succeeded in escaping to Moscow and later rose (separately) to prominence in the International Communist movement (in Brazil and China resepctively).

After the July 20 plot it was used as a detention centre by the Gestapo, which on the night of April 22, 1945, murdered 16 inmates, amongst them Klaus Bonhoeffer, Rüdiger Schleicher and Albrecht Haushofer, who wrote the "Moabit Sonnets" during his arrest.

After the war, the prison in its last years housed some Nazi war criminals, such as Erich Bauer who had operated the gas chambers in the Sobibor extermination camp.

The prison was closed in 1955 and demolished, though its walls can still be seen north of the Hauptbahnhof enclosing a remembrance park laid out in 2006.

The vast building of the Criminal Court on Turmstraße was erected in 1906.

In 1909 architect Peter Behrens built the AEG turbine factory at the north-western Huttenstraße, one of the first works of Modern architecture.

Large parts of Moabit are traditional working-class residential areas. Some areas were known for their political activity during the Nazi era, such as the "red Beusselkiez" or the neighbouring "Rostock Kiez". After the Nazi Machtergreifung in 1933 they were considered Communist resistance cells.

For a long time, Moabit was sparsely inhabited. Its population grew considerably after its incorporation into Berlin in 1861:

With the fall of the Berlin Wall, Moabit's location has changed from a border district of West Berlin to a central district in the reunited city. Due to its proximity to the new Government District, many new buildings have been built there, such as for example the Federal Ministry of the Interior Bundesministerium des Innern.

Near the border to Mitte the former S-Bahn station Lehrter Stadtbahnhof was demolished to make space for the new central station Berlin Hauptbahnhof, Europe's largest two level railway station, where the east-west and the north-south railway axis meet. Nearby is one of Germany's oldest railway station buildings, the neoclassical Hamburger Bahnhof, built in 1847, which was closed in 1884 and since 1996 houses one of the Berlin State Museums for contemporary art.

Moabit is mentioned in countless books and films taking place in Germany or Berlin, primarily in reference to criminal court cases or incarcerations at the Central Criminal Court (Kriminalgericht) and detention centre.

The Berlin-based band No Nebraska! released a song entitled "Moabit is an Island" on their EP "Serves Six" in 2007.