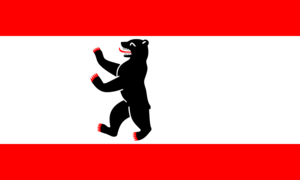 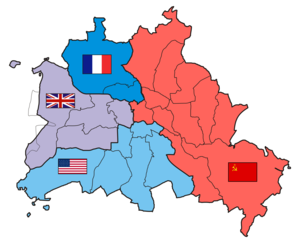 West Berlin was the name given to the western part of between 1949 and 1990. It consisted of the American, British, and French occupation sectors established in 1945. It was in many ways integrated with, although legally not a part of, . The Soviet sector became , which claimed as its capital; however, the Western Allies did not recognize this claim, as they asserted that the whole city was legally under four-power occupation. The building of the in 1961 sealed the border to West Berlin, which since the end of the Second World War had been surrounded by East Berlin and East Germany.

The established the legal framework for the occupation of Germany in the wake of . According to the agreement, Germany would be formally under the of the four major wartime allies &mdash; the , the , , and the &mdash; until a German government acceptable to them all could be reconstituted. Germany would be divided into four zones, each administered by one of the allies. Berlin, though surrounded by the Soviet zone, would be similarly divided, with the western allies occupying an consisting of the western parts of the city. According to the agreement, the occupation of Berlin would end only as a result of a agreement. (This clause did "not" apply to Germany as a whole.) The western allies were guaranteed an air corridor to their sectors of Berlin, and the Soviets also informally allowed road and rail access between West Berlin and the western parts of Germany.

At first, this arrangement was officially a temporary administrative expedient, and all parties declared that Germany and Berlin would soon be reunited. However, as the relations between the western allies and the Soviet Union soured and the began, the joint administration of Germany and Berlin broke down. Soon Soviet-occupied Berlin and western-occupied Berlin had entirely separate city administrations. In 1948, the Soviets tried to force the issue and expel the western allies from Berlin by imposing a land blockade on the western sectors. The west responded by using its guaranteed air corridors to resupply their part of the city in what became known as the . In May 1949, the Soviets lifted their blockade, and the future of West Berlin as a separate jurisdiction was ensured. By the end of that year, two new states had been created out of occupied Germany &mdash; the Federal Republic of Germany () in the West and the German Democratic Republic () in the East &mdash; with West Berlin an enclave surrounded by, but not part of, the latter.

According to the legal theory followed by the western allies, the occupation of most of Germany ended in 1949 with the declaration of the Federal Republic of Germany and the German Democratic Republic. However, because the occupation of Berlin could only be ended by a quadripartite agreement, Berlin remained an occupied territory under the formal sovereignty of the allies. Hence, the "" (constitution of the Federal Republic) had no application in West Berlin. Meanwhile the Soviets unilaterally declared the occupation of East Berlin at an end along with the rest of East Germany, but this move was not recognized by the western allies who continued to view all of Berlin as a jointly occupied territory belonging to neither of the two states.

But the western allies remained the ultimate political authorities there. West Berlin was run by an elected Mayor and city government at , but this government formally derived its authority from the occupying forces, not its electoral mandate.

The ambiguous legal status of West Berlin meant that West Berliners were not eligible to vote in federal elections; instead, they were indirectly represented in the "" by 20 non-voting delegates chosen by the West Berlin House of Representatives. Similarly, the West Berlin Senate sent non-voting delegates to the "Bundesrat". However as German citizens, West Berliners were able to stand for election; including Social Democrat Chancellor , who was elected by means of his party's list of candidates. Also, men there were exempt from the Federal Republic's compulsory military service; this exemption made the city a popular home for West German youths, which resulted in a flourishing that became one of the defining features of the city.

Other anomalies included "provisional ID cards" without the West German coat of arms, a ban on and any other West German airlines' flights to the city because the s between West Germany and West Berlin as agreed in the post-war era were to be used by UK, French or U.S. planes only. Even without this to consider, East Germany refused to permit use of its airspace since it too claimed the Lufthansa name. With West Berlin surrounded by East German territory on all sides, flights out of West Berlin would have been logistically impossible.

West Berlin had its own postal administration, separate from West Germany's, which issued its own until 1990. However the separation was merely symbolic, in reality West Berlin's postal service was completely integrated with West Germany's, using the same postal code system. Similarly, West Berlin used the same international dialling code as West Germany, , with the area code 030.

Communist countries however did not recognize West Berlin as part of West Germany and usually portrayed it as a "third" German jurisdiction. The disagreement about Berlin's status was one of the most important debates of the Cold War.

This meant that West Berliners could circumvent part of these limitations if they had a second home in West Germany proper. For example they could vote in Bundestag elections and they could be drafted to West German military service if they did so.

These usages were so ingrained that one could deduce a source's political leaning from the name used for Berlin or its parts.

The years of division

While West Berlin was a formally separate jurisdiction from East Berlin after 1949, there was, for more than a decade, freedom of movement between the two, and in many ways Berlin still functioned as a single city. The U-Bahn and S-Bahn public transit networks, rebuilt after the war, spanned all occupation sectors. Many people lived in one half of the city and had family members, friends, and jobs in the other.

To stop this drain of people defecting, the East German government built the , thus physically closing off West Berlin from East Germany, on , . It was still possible to travel from West Berlin to West Germany by air and by specific rail and transit routes set aside for that purpose, but inhabitants of the two Berlins were now physically and legally separated from each other.

On , , U.S. President visited West Berlin and gave a public speech known for its famous phrase "."

The (September 1971) and the Transit Agreement (May 1972), helped to slightly ease the tensions over West Berlin and at a practical level made it easier, though with nightmarish restrictions, for West Berliners to travel to East Germany and simplified the bureaucracy for Germans travelling along the autobahn transit routes.

On , the wall was opened, and the two cities were once again physically &mdash; though still not legally &mdash; united. The so-called , signed by the two German states and the four wartime allies, paved the way for and an end to the western occupation of West Berlin. On , West Berlin and East Berlin were united as the city of Berlin, which then acceded to the Federal Republic as a "state," along with the rest of East Germany. West Berlin and East Berlin thus both formally ceased to exist.

In the American Sector:

In the British Sector:

In the French Sector: