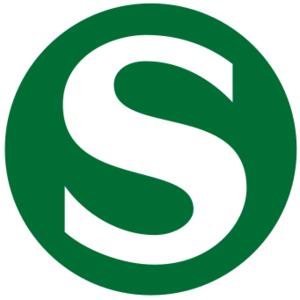 The is a system operated by "S-Bahn Berlin GmbH", a subsidiary of the . The Berlin S-Bahn consists of 15 lines and is integrated with the mostly underground U-Bahn to form the backbone of Berlin's rapid transport system. Although the S- and U-Bahn are part of a unified fare system, they have different operators: the U-Bahn is run by BVG, the main public transit company for the city of Berlin.

The S-Bahn routes all feed into one of three core lines: a central, elevated east-west line ("die Stadtbahn"), a central, mostly underground north-south line ("die Nord-Süd Bahn"), and a circular, elevated line ("die Ringbahn"). Geographically, the Ringbahn takes the form of a dog's head and colloquially known to Berliners by that name ("Hundekopf"). Outside the Ringbahn, suburban routes radiate out in all directions.

Generally speaking, the first digit of a route number designates the main route or a group of routes. Thus, S25 is a bifurcation of S2, while S41, S42, S45, S46, and S47 are all Ringbahn routes that share some of the same route.

The normal daytime service runs fundamentally between 04:00 and 01:00 Monday - Friday, between 05:00 and 01:00 on Saturdays and between 06:30 and 01:00 on Sundays. However, there is a comprehensive nighttime service on most lines between 01:00 and 05:00 on Saturdays and 01:00 and 06:30 on Sundays, which means that most stations enjoy a continuous service between Friday morning and Sunday evening. The only exception to this is the section of the S8 between SBB stations|station=Blankenburg and SBB stations|station=Hohen Neuendorf which has no service during these times. Many other lines are totally unchanged in their operation, but some are curtailed or extended during nighttime service.

The S-Bahn came into existence in 1924. It was formed as the network of suburban commuter railways running into Berlin was converted from steam operation to a electric railway. The resulting network was primarily above-ground but with some subsurface s.

Services on the Berlin S-Bahn were at first provided by the German national railway, the Deutsche Reichsbahn. Electrification of the existing suburban lines was completed around 1929, and thoughts turned to a new project: a tunnel that would join two spur lines that protruded into the city centre from the north and south. This tunnel, to be known as the Nord Süd Bahn, was a prestige project for the Nazis, and was opened in two sections. The first, from the north to , opened in time for the 1936 Berlin Olympics; the final section, via , opened the month after the Second World War began, in October 1939.

During and after World War II

Many sections of the S-Bahn were closed during the war due to enemy action. The Nord Süd Bahn tunnel was flooded on by retreating troops during the final . The exact number of casualties is not known, but up to 200 persons are presumed to have perished, since the tunnel was used as a public shelter and also served to house military wounded in trains in underground sidings. Service through the tunnel commenced again in 1947.

After hostilities ceased in 1945, Berlin was given special status as a "Four Sector City," surrounded by the Russian Occupation Zone, which later became the (GDR). The Allies had decided that S-Bahn service in the western sectors of Berlin should continue to be provided by the Reichsbahn (DR), which was by now the provider of railway services in East Germany. (Rail services in proper were provided by the new .)

As relations between East and West began to sour with the coming of the , the Berlin S-Bahn soon became a victim of the hostilities. Although services continued operating through all occupation sectors, checkpoints were constructed on the borders to East Berlin and on-board "customs checks" were carried out on trains. From 1958 onwards, some S-Bahn trains ran non-stop through the western sectors from stations in East Berlin to stations on outlying sections in East Germany, so as to avoid the need for such controls. From this point onwards, all East German government employees were forbidden to use the S-Bahn as it travelled through West Berlin.

The western sectors of the city were physically cut off from East Germany on by what was later called the , in a well-prepared plan to separate the two halves of the city &ndash; and at the same time, to divide the Berlin public transit network into two separate systems. Stadtbahn services were curtailed from both directions at the Friedrichstraße station. This station was divided into two physically separated areas, one for eastern passengers and one for westerners. Although the station lay within East Berlin, western passengers could transfer between S-Bahn lines or to the U-Bahn without passing through border checks, much like passengers changing planes at an international airport. The GDR also operated an in the western portion of the station, where persons arriving from West Berlin (again without passing through border controls) could buy luxury goods such as tobacco and alcoholic beverages at discounted prices (compared to prices in West Berlin), provided they paid in , owing in part to the fact that Intershop customers did not pay West German taxes on their purchases. The West Berlin authorities were aware of this situation but did not impose stringent customs controls on such purchases out of political considerations. The Friedrichstraße station also become the main entry point for train and subway riders from into . Service on the Nord Süd Bahn was operated for western passengers only. It passed through a relatively short stretch under East Berlin territory in the city centre, and trains did not stop at the underground East Berlin S-Bahn stations, which were called s. Similarly, the Ringbahn services in the north of the city were curtailed at Gesundbrunnen from the west and Schönhauser Allee from the east, and in the south-east of the city at Sonnenallee and Köllnische Heide from the west and Treptower Park and Baumschulenweg from the East.

Because the S-Bahn was operated by the DR, West Berliners vented their frustration at the building of the wall by boycotting it since its fares were seen as subsidising the regime in the East. "Keinen Pfennig mehr für Ulbricht," or "not a penny more for Ulbricht," became the S-Bahn opponents' chant. Within days of the Berlin Wall being built, the BVG, with assistance from other transit companies in West Germany, began providing "solidarity with Berlin buses" &ndash; new bus services which paralleled the S-Bahn lines and therefore provided an alternative. After many years of declining passenger usage and difficult industrial relations between the West Berlin workforce and their East Berlin employers, most of the western portion of the S-Bahn was closed down in September 1980 following a strike. A 20-minute service was still provided on the Stadtbahn from Westkreuz to Friedrichstraße as well as services on the Nord-Süd Bahn between Frohnau, Friedrichstraße, Lichtenrade or Wannsee.

By contrast, during the same period, services on the S-Bahn in East Berlin were increased and new lines built as housing projects expanded eastward from the city centre. With most of the U-Bahn located in West Berlin, the S-Bahn became the backbone of the East Berlin transit network.

The 1980 incidents turned media and political attention towards what was left of West Berlin's S-Bahn network. The city government decided to enter negotiations with East Germany which were finally successful. On , the BVG took over the responsibility for operation of S-Bahn services in West Berlin. After further closedowns that same day, a limited service was restored, initially comprising only two short sections without direct interchange between them. In the years between 1984 and 1989, several sections were gradually reopened, resulting in a network of 71 km and three lines - with one line running on the Stadtbahn and two on the Nord Süd Bahn - comprising of about 50% of West Berlin's original network. This development brought West Berlin's S-Bahn back into the public awareness and restored its popularity.

After the came down in November 1989, the first broken links were re-established, with Friedrichstraße on July 1, 1990 as the first. The BVG and DR jointly marketed the services soon after "die Wende". Administratively, the divided S-Bahn networks remained separate in this time of momentous changes, encompassing and reunification of Berlin into a single city, although the dividing line was no longer the former Berlin Wall. DR and BVG (of the whole of reunified Berlin from , after absorbing BVB of East Berlin) operated individual lines end to end, both into the other party's territories. For example, S2 was all-BVG even after it was extended northward and southward into Brandenburg/former GDR territory. The main east-west route (Stadtbahn) was a joint operation. Individual trains were operated by either BVG or DR end-to-end on the same tracks. This arrangement ended on , with the creation of due to the merger between DR and the former West Germany's . All S-Bahn operations in Berlin were transferred to the newly formed S-Bahn Berlin GmbH as a subidiary of Deutsche Bahn and the BVG withdrew from running S-Bahn services.

Technically, a number of projects followed in the steps of re-establishing broken links in order to restore the former S-Bahn network to its 1961 status after 1990, especially the Ringbahn. In December 1997 the connection between Neukölln and Treptower Park via Sonnenallee was reopened, enabling S4 trains to run 75% of the whole ring between Schönhauser Allee and Jungfernheide. On 16 June 2002, the section Gesundbrunnen - Westhafen also reopened, re-establishing the Ringbahn operations.

Until 1984, all Berlin S-Bahn routes were allocated letters as a means of identifying the route of the train. These letters were occasionally followed by Roman numerals to indicate a shortworking or bifurcation in the service (e.g., A, BI, BII, C,) and are still used internally by the Berlin S-Bahn GmbH for timetabling and in conjunction with radio call-signs to each train unit. When the BVG took over the responsibility for operation of S-Bahn services in West Berlin in 1984, it introduced a new unified numbering scheme for both the S-Bahn and the U-Bahn, which it also operated. Existing U-Bahn route numbers were prefixed with the letter "U," while the new S-Bahn route numbers were prefixed with the letter "S." This system of numbering routes was used in all other West German cities, and was extended to the S-Bahn service for the whole city after reunification.