Music of the United Kingdom 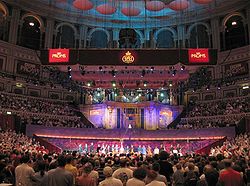 A Promenade concert in the Royal Albert Hall, 2004.

Throughout its history, the United Kingdom has been a major exporter and source of musical innovation in the modern and contemporary eras, drawing its cultural basis from the history of the United Kingdom, from church music, from Western culture and from the ancient and traditional folk music and instrumentation of England, Scotland, Northern Ireland and Wales. In the 20th century, influences from the music of the United States became most dominant in popular music. This led to the explosion of the British Invasion, while subsequent notable movements in British music include the New Wave of British Heavy Metal and Britpop. The United Kingdom has one of the world's largest music industries today, with many British musicians having had an impact on modern music. 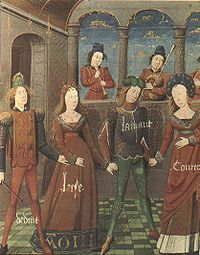 English Miniature from a manuscript of the Roman de la Rose

Music in the British Isles, from the earliest recorded times until the Baroque and the rise of recognisably modern classical music, was a diverse and rich culture, including sacred and secular music and ranging from the popular to the elite.[1] Each of the major nations of England, Ireland, Scotland and Wales retained unique forms of music and of instrumentation, but British music was highly influenced by continental developments, while British composers made an important contribution to many of the major movements in early music in Europe, including the polyphony of the Ars Nova and laid some of the foundations of later national and international classical music.[2] Musicians from the British Isles also developed some distinctive forms of music, including Celtic chant, the Contenance Angloise, the rota, polyphonic votive antiphons and the carol in the medieval era.

Church music and religious music was profoundly affected by the Protestant Reformation which affected Britain from the 16th century, which curtailed events associated with British music and forced the development of distinctive national music, worship and belief. English madrigals, lute ayres and masques in the Renaissance era led particularly to English language opera developed in the early Baroque period of the later seventeenth century.[3] In contrast, court music of the kingdoms of England, Scotland and Ireland, although having unique elements remained much more integrated into wider European culture.

The Baroque era in music, between the early music of the Medieval and Renaissance periods and the development of fully fledged and formalised orchestral classical music in the second half of the eighteenth century, was characterised by more elaborate musical ornamentation, changes in musical notation, new instrumental playing techniques and the rise of new genres such as opera. Although the term Baroque is conventionally used for European music from about 1600, its full effects were not felt in Britain until after 1660, delayed by native trends and developments in music, religious and cultural differences from many European countries and the disruption to court music caused by the Wars of the Three Kingdoms and Interregnum.[4] Under the restored Stuart monarchy the court became once again a centre of musical patronage, but royal interest in music tended to be less significant as the seventeenth century progressed, to be revived again under the House of Hanover.[5]

British chamber and orchestral music drew inspiration from continental Europe as it developed into modern classical music. The Baroque era in British music can be seen as one of an interaction of national and international trends, sometimes absorbing continental fashions and practices and sometimes attempting, as in the creation of ballad opera, to produce an indigenous tradition.[6] However, arguably the most significant British composer of the era, George Frideric Handel, was a naturalised German, who helped integrate British and continental music and define the future of the classical music of the United Kingdom that would be officially formed in 1801.[7] 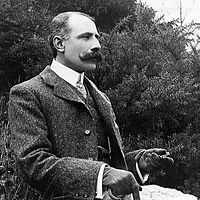 Musical composition, performance and training in the United Kingdom inherited the European classical traditions of the eighteenth century (above all, in Britain, from the example of Handel) and saw a great expansion during the nineteenth century.[8] Romantic nationalism encouraged clear national identities and sensibilities within the countries of the United Kingdom towards the end of the nineteenth century, producing many composers and musicians of note and drawing on the folk tradition.[9] These traditions, including the cultural strands drawn from the United Kingdom's constituent nations and provinces, have continued to evolve in distinctive ways through the work of such composers as Arthur Sullivan, Gustav Holst, Edward Elgar, Hubert Parry, Ralph Vaughan Williams and Benjamin Britten.[10]

Each of the four countries of the United Kingdom has its own diverse and distinctive folk music forms. In addition, there are numerous distinct and semi-distinct folk traditions brought by immigrants from Jamaica, India, the Commonwealth and other parts of the world. Folk music flourished until the era of industrialisation when it began to be replaced by new forms of popular music, including music hall and brass bands. Realisation of this led to two folk revivals, one in the late-19th century and the other in the mid-20th century, which kept folk music as an important sub-culture within society.[11]

England has a long and diverse history of folk music dating back at least to the medieval period and including many forms of music, song and dance. Through two periods of revival from the late nineteenth century much of the tradition has been preserved and continues to be practiced.[11] It led to the creation of a number of fusions with other forms of music that produced sub-genres such as electric folk, folk punk and folk metal and continues to thrive nationally and in regional scenes, particularly in areas such as Northumbria and Cornwall.[12]

Ireland, including Northern Ireland, has vibrant folk traditions. The popularity of traditional instruments such as fiddles has remained throughout the centuries even as analogues in Great Britain died out. Perhaps the most famous modern musician from Northern Ireland influenced by folk tradition is Van Morrison.

Scottish folk music includes many kinds of songs, including ballads and laments, sung by a single singer with accompaniment by bagpipes, fiddles or harps. Traditional dances include waltzes, reels, strathspeys and jigs. Alongside the other areas of the United Kingdom, Scotland underwent a roots revival in the 1960s. Cathy-Ann McPhee and Jeannie Robertson were the heroes of this revival, which inspired some revolutions in band formats by groups like The Clutha, The Whistlebinkies, The Boys of the Lough and the Incredible String Band.

Wales is a Celtic country that features folk music played at twmpathau (communal dances) and gwyl werin (music festivals). Welsh music also includes male voice choirs and songs accompanied by a harp. Having long been subordinate to English culture, Welsh musicians in the late 20th century had to reconstruct traditional music when a roots revival began. This revival began in the late 1970s and achieved some mainstream success in the UK in the 80s with performers like Robin Huw Bowen, Moniars and Gwerinos.

In the sense of commercial music enjoyed by the people, British popular music can be seen to originate in the sixteenth and seventeenth centuries with the arrival of the broadside ballad, which were sold cheaply and in great numbers until the nineteenth century.[13] Further technological, economic and social changes led to new forms of music in the nineteenth century, including the brass band, which produced a popular and communal form of classical music.[14] Similarly, the music hall sprang up to cater for the entertainment of new urban societies, adapting existing forms of music to produce popular songs and acts.[15] In the 1930s the influence of American Jazz led to the creation of British dance bands, who provided a social and popular music that began to dominate social occasions and the radio airwaves.[16] 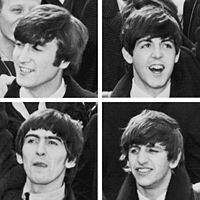 Forms of popular music, including folk music, jazz, pop and rock music, have particularly flourished in Britain since the twentieth century. Britain has had an impact on popular music disproportionate to its size, due to its linguistic and cultural links with many countries, particularly the United States and many of its former colonies like Australia, South Africa, and Canada, and its capacity for invention, innovation and fusion, which has led to the development of, or participation in, many of the major trends in popular music.[17] In the early-20th century, influences from the United States became most dominant in popular music, with young performers producing their own versions of American music, including rock n' roll from the late 1950s and developing a parallel music scene. This is particularly true since the early 1960s when the British Invasion, led by The Beatles, helped to secure British performers a major place in development of pop and rock music. Since then, rock music and popular music contributed to a British-American collaboration, with trans-Atlantic genres being exchanged and exported to one another, where they tended to be adapted and turned into new movements, only to be exported back again. Genres originating in or radically developed by British musicians include blues rock, heavy metal, progressive rock, hard rock, punk rock, electric folk, folk punk, acid jazz, trip hop, shoegaze, drum and bass, grime, Britpop and dubstep.

Timeline of music of the United Kingdom and its preceding states