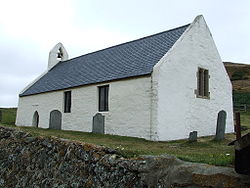 Christianity is the largest religion in Wales. Until 1920 the established church was Anglican, although Wales has a strong tradition of nonconformism and Methodism.

Most adherents to organised religion in Wales follow the Church in Wales or other Christian denominations such as the Presbyterian Church of Wales, Catholicism, Baptist and Congregational churches, and Eastern Orthodoxy. Other religions Welsh people may be affiliated with include Buddhism, Hinduism, Judaism, Islam, Sikhism and Zoroastrianism, with most non-Christian Welsh people found in Cardiff.

Christianity arrived in Wales during the Roman occupation, but was initially suppressed. The first Christian martyrs in Wales, Julius and Aaron, were killed at Isca Augusta (Caerleon) in south Wales in about 304 AD. The earliest Christian object found in Wales is a vessel with a Chi-Rho symbol found at the nearby town of Venta Silurum (Caerwent). By the end of the 4th century Christianity became the sole official religion of the Roman Empire.[1]

As the Roman legions garrisoned in Wales withdrew in the early 5th century, invading tribes including the Angles and Saxons, who later became the Anglo-Saxon English, were unable to make inroads except possibly along the Severn Valley as far as Llanidloes. However they gradually conquered eastern and southern Britain (which then became England), thus leaving Wales cut off from her Celtic relations in Scotland, Cornwall and Cumbria. The writer Gildas drew sharp contrasts between the Christian Welsh at this time and the pagan Anglo-Saxon invaders.

Age of the Saints

The "age of the saints" (approximately 500–700 AD) was marked by the establishment of monastic settlements throughout the country, by religious leaders such as Saint David, Illtud and Teilo. This was the period when the Welsh developed a shared national identity, arising from their language and religious beliefs.[2][1]

The Welsh refused to co-operate with Augustine of Canterbury's mission to the Anglo-Saxons. However, a combination of Celtic Christianity's reconciliation with Rome and English conquest of Wales meant that from the Middle Ages until 1920, the Welsh dioceses were part of the Province of Canterbury -- in communion with the See of Rome until the Reformation.

The Welsh Methodist revival of the 18th century was one of the most significant religious and social movements in the history of Wales. The revival began within the Church of England in Wales and at the beginning remained as a group within it, but the Welsh revival differed from the Methodist revival in England in that its theology was Calvinist rather than Arminian. Welsh Methodists gradually built up their own networks, structures, and even meeting houses (or chapels), which led eventually to the secession of 1811 and the formal establishment of the Calvinistic Methodist Presbyterian church of Wales in 1823.

The Welsh Methodist revival also had an influence on the older nonconformist churches, or dissenters — the Baptists and the Congregationalists — who in turn also experienced growth and renewal. As a result, by the middle of the nineteenth century, Wales was a predominantly a nonconformist country.

The 1904-1905 Welsh Revival was the largest full scale Christian Revival of Wales of the 20th century. It is believed that at least 100,000 people became Christians during the 1904–1905 revival, but despite this it did not put a stop to the gradual decline of Christianity in Wales, only holding it back slightly.

The Sabbatarian temperance movement was historically strong among the Welsh, the sale of alcohol being prohibited on Sundays in Wales by the Sunday Closing Act of 1881 – the first legislation specifically issued for Wales since the Middle Ages. From the early 1960s, local council areas were permitted to hold referendums every seven years to determine whether they should be "wet" or "dry" on Sundays: most of the industrialised areas in the east and south went "wet" immediately, and by the 1980s the last district, Dwyfor in the northwest, went wet, since then there have been no more Sunday-closing referendums.

A monastic community was founded by Saint David at what is now St David's. The present building of St David's Cathedral was started in 1181.

Saint David is the patron saint of Wales.

The largest non-Christian faith in Wales is Islam, with about 22,000 members in 2001 served by about 40 mosques.

The first Muslim community which permanently settled in Wales consisted of Yemeni sailors who arrived in ports such as Swansea shortly after 1900. The first mosque in Britain is recorded as having been at 2 Glyn Rhondda Street, Cardiff, in 1860[4].

Main article: History of the Jews in Wales

Judaism has quite a long history in Wales, with a Jewish community recorded in Swansea from around 1730. In August 1911, during a period of public order and industrial disputes, Jewish shops across the South Wales coalfield were damaged by mobs. Since that time the Jewish population of that area, which reached a peak of 4,000–5,000 in 1913, has declined with only Cardiff retaining a sizeable Jewish population, of about 2,000 in the 2001 census.

Hinduism and Buddhism each have about 5,000 adherents in Wales, with the rural county of Ceredigion being the centre of Welsh Buddhism. Govinda's temple & restaurant, run by the Hare Krishnas in Swansea, is a focal point for many Welsh Hindus. There are about 2000 Sikhs in Wales, with the first purpose-built gurdwara opened in the Riverside area of Cardiff in 1989. In 2001 some 7,000 people classified themselves as following "other religions" including a reconstructed form of Druidism, which was the pre-Christian religion of Wales (not to be confused with the Druids of the Gorsedd at the National Eisteddfod of Wales).

Approximately one-sixth of the population, some 500,000 people, profess no religious faith.

The Roman Catholic Church (Eglwys Gatholig Rufeinig) and the Church in Wales (Eglwys yng Nghymru) are the two largest churches in Wales, both of which have less than 5% of the population as members. The next largest religious society is the Presbyterian Church of Wales (Eglwys Bresbyteraidd Cymru) with 34,819 (2004) members (slightly more than 1% of the population), followed by the Union of Welsh Independents (Undeb yr Annibynwyr Cymraeg) and the Baptist Union of Wales (Undeb Bedyddwyr Cymru) which each have about 1% of the population as members.

The 2001 census showed that slightly less than 10% of the Welsh population are regular church- or chapel-goers (a slightly smaller proportion than in England or Scotland), although about 70% of the population see themselves as Christian in some way. 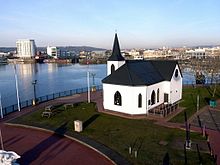 The Norwegian Church, Cardiff, was established by the Church of Norway in 1868 to serve the religious needs of Norwegian sailors and expatriates.